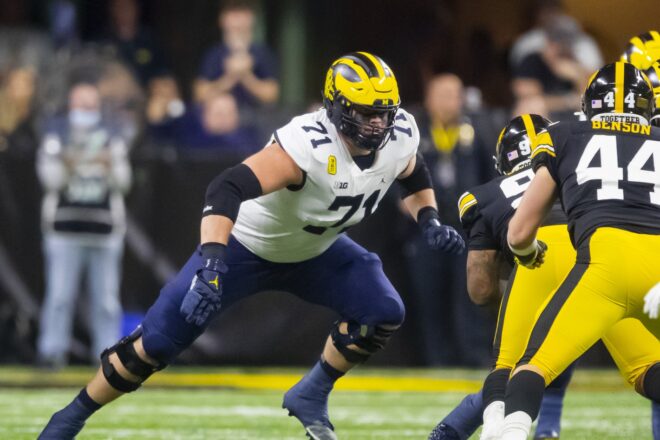 Stueber is another big player, coming in at nearly 6’7″ and weighing 325lbs.  Looking at the film, he’s powerful, doing a good job of driving guys back while also sliding around pretty well in pass protection.

One of the things that stood out is that he does a good job of getting on top of a defender’s hands and keeping them from getting them up around the quarterback, and he also does a good job of recognizing the rush while being able to deal with multiple players coming in.

He won quite a few battles at the point of attack and very rarely got manhandled.  The only knock against Stueber appears to be against elite players where he had a tough time keeping his hands on them while also occasionally losing his balance.

But he’s a guy who definitely appears to have some solid potential and to risk a 7th-round selection on a player who could possibly provide depth down the road is never a bad thing.

He played mostly at tackle, playing 20 games at right tackle for the Wolverines and two at right guard, however, some analysts feel he’s a guy who might project as an inside player.

The fact he could have some versatility will likely help his cause as if he can develop, this past season in New England was certainly an example of how important those traits can be.

Stueber said at the Combine back in March that he’s willing to play wherever a team wants him, although he feels he can prove that he can handle the job of being an NFL tackle.

“I think a good amount of teams see me at guard,” Stueber told the Detroit news. “Once I get there and show my abilities, some may underrate my quickness and speed (at tackle).”

Here’s a look at a couple of clips of him during the Senior Bowl, including a pretty good match-up against UConn defensive tackle, Travis Jones:

Pretty rep from Stueber using a snatch on Jones pic.twitter.com/m00i1G8EoS

Another where he took care of Haskell Garrett:

Had an awesome day today! pic.twitter.com/pS0t1CLExQ

Stuebert ended up being the third and final offensive lineman taken in the draft, with 6th round pick Chasen Hines out of LSU being the previous one taken ahead of him the round before, along with first-round pick Cole Strange from Chattanooga as the other.

Next up will be rookie minicamps, which will take place at some point either May 6-9 or 13-16, with those dates yet to be determined.