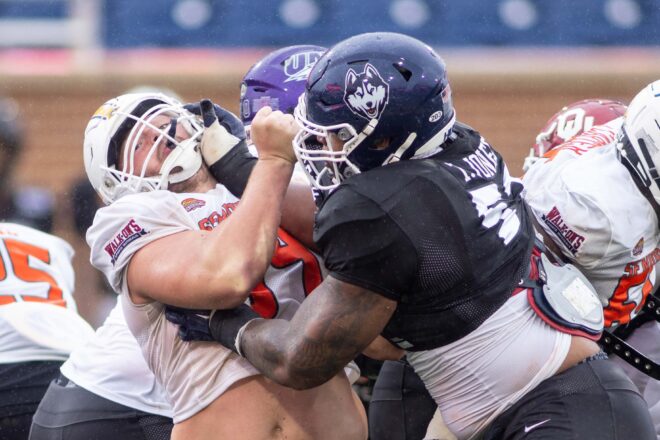 Bill Belichick is never afraid to make a controversial selection, and he certainly did just that during night one of the 2022 NFL Draft.

After trading out of the #21 overall spot in round one back to 29th overall, New England ended up surprising everyone by selecting Chattanooga offensive lineman Cole Strange, which it’s safe to say surprised pretty much everyone.

Strange was indeed among one of the top offensive line prospects but he was projected to be a day 2 pick, with Pro Football Focus even listing him as a potential third-round pick.  So for the Patriots to seemingly take him that early was surprising, especially given their other needs on defense.

But what’s key about Strange is the fact he falls into the category of a player who many believe is a day one starter, and he measured off the charts with his athleticism heading into the draft.

He’s got a nasty edge to him and has no issue attacking defenders, holding his own against other highly rated players who were ranked above him.  Those traits clearly made him stand out enough that he caught the attention of Belichick and the Patriots, who ended up pulling the trigger and selecting him on Thursday night.

The thought process might have been that Belichick and New England may have had another player in mind who came off the board following their trade back from 21 to 29.  There was a significant run on highly-touted defensive players from that point, with Quay Walker, Kaiir Elam, Jermaine Johnson II, Devin Lloyd and Devonte Wyatt each coming off the board following multiple trade-ups by the Packers, Bills, Jets and Jaguars respectively, after they each jumped back up into the fray.

That could have potentially changed the Patriots’ plans, causing them to switch gears and turn their attention elsewhere.

It’s entirely possible that Belichick viewed the 29th overall pick the same way he does an early second-round selection, which could have been his mindset.  Strange’s stock had been rising, which could have ended seeing someone else taking him off the board early tomorrow.  With that being the case, the key factor was likely making absolutely sure he got a player he believed could start and get the job done, which is where Strange fits the bill.

He’s incredibly tough and strong, bringing back memories of former Patriots offensive lineman Logan Mankins, who was also extremely tough and was an asset during his tenure with the team.  Having someone like Strange on the roster is definitely a big help for Mac Jones and the club’s ground game, which is clearly going to be important during Jones’ development in keeping him upright.

Strange also has experience playing multiple positions, having started 41 games at left guard, as well as two at left tackle.  He’s also played center, so it gives them some versatility with a player who can do it all.

Most importantly, it also helps keep big-bodied players from coming up the middle and making plays on their second-year quarterback, which is certainly a good thing.

Strange may have been an unexpected selection, but it’s probably safe to say that if the results on the field come close to the potential he showed in college, few people will be upset.

Belichick talked about that fact yesterday with former Patriots QB, Scott Zolak in a pre-draft interview posted on the team’s website.  He said sometimes going for need is important, but getting a player who you know can get the job done is sometimes also the determining factor.

“That’s a decision, for sure. I think the key thing, though, is you want to make sure the player that you take is good enough … he’s a good enough player,” said Belichick. “Because if he isn’t, then you haven’t really filled the need even if you have on paper.  In the end, it’s not going to work out. So you want to make sure that the players are good enough to actually make your team and can contribute to your team if you take him.”

Fortunately, despite where he was selected, it appears Patriots fans can at least breathe a sigh of relief knowing that Strange has what it takes to do just that.

How Was This Article?
Posted Under: 2022 Patriots Draft
Tags: Cole Strange University of Chattanooga

Take him in the first round, you gain the fifth year option. Good move.