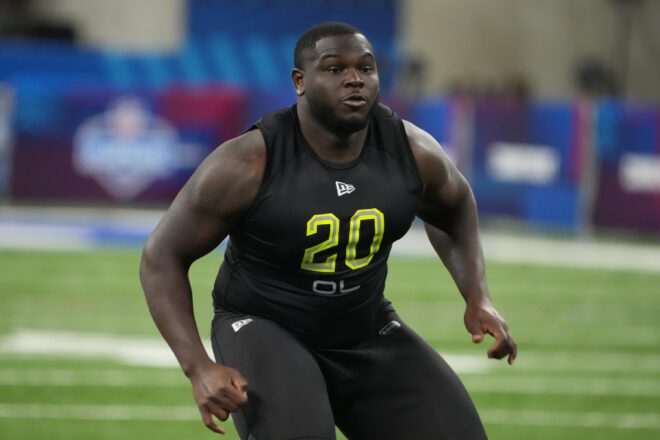 The New England Patriots finally selected another offensive lineman at the end of Round 6 on Saturday, with LSU’s Chasen Hines being taken by the team with the #210 overall pick.

Hines was an impact player from the time he worked his way into the line-up, rotating both at guard and center during LSU’s 2019 championship season.  He became a starter the following year and played at right guard for his final two seasons, which was a position he excelled at.

Looking at the film, he’s a beast, weighing in at 331lbs at his pro day while coming in at 6’2″.  He’s incredibly strong, but he’s also someone who has both quick feet and fairly good balance.

He doesn’t appear to get pushed off his spot and having played against some solid competition in the SEC, he’s dealt with some pretty talented pass rushers.  He’s also got a nasty edge to him, with various scouting reports also noting his aggressiveness and the fact that he doesn’t let up.

Hines does a good job of dealing with the rush and slides his feet to keep himself in good position, along with finishing the block all the way through.  Even against other strong players he handled it pretty easily and didn’t ever seem to be off-balance.  It wasn’t always perfect, but he’s someone who definitely seems to have the physical attributes if he can improve some things a little more.

But for someone of his size, he’s also pretty athletic, getting down the line quickly when he has to pull and he often mauled a lot of the guys he was matched up against.  He also did a good job in pass blocking situations, again, moving his feet fairly well and keeping his head on a swivel, picking up defenders and preventing them from getting around him.

Injuries appear to again be the reason why another potential starter may have slid down the board, with Hines suffering an undisclosed injury at some point during the team’s loss to Alabama in November and being lost for the season.  He’s also reportedly had issues with controlling his weight.

Versatility appears to be his strength and having a talented player who held his own in one of the toughest conferences in football is never a bad thing.  For a team that needed to add some quality depth up front and a guy who can fill various roles, it looks like the Patriots may have found a potentially good addition in Hines.

By: Robert Alvarez
Patriots Chairman and CEO Robert Kraft is honored by two organizations for his charitable and humanitarian work.
9 hours ago

By: Robert Alvarez
Bill Belichick issues a statement praising Vince Wilfork following his selection into the Patriots Hall of Fame.
11 hours ago

By: Russ Goldman
In this episode, Steve and Derek break down the 2022 Patriots regular season schedule. The guys also discuss Vince Wilfork's election into the team Hall…
21 hours ago