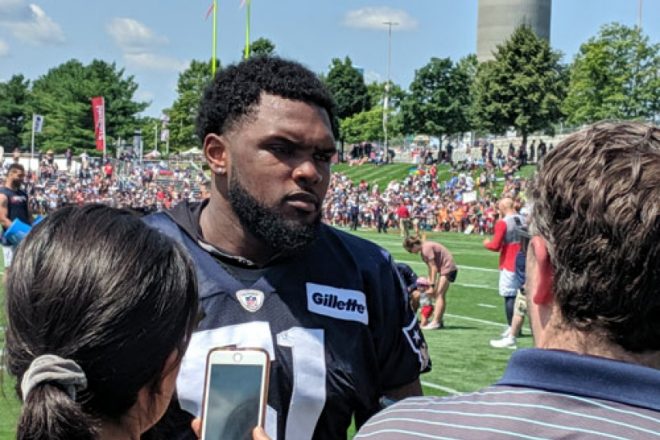 Good morning; here are your weekly Patriots news 07-03 and some NFL notes this week.

On behalf of us all here, we hope that everyone enjoys a happy and safe Independence Day tomorrow. And despite all of the difficulties facing our nation, it is still the best if imperfect union in the world.

The Patriots 2022 training camp opens later this month and then football will be with us until February. It should prove to be a very intriguing season.

The comments by Martellus Bennett, who played with the Patriots during the Super Bowl run in 2016, were certainly eye-openers. To be sure, Bennett has always been an outspoken player, and his comments about former Patriots QB Jimmy Garoppolo were certainly harsh.  But what was interesting, was that fellow receiver Julian Edelman backed Bennett up.

Flashback to 2016 and Tom Brady was suspended for the first four games of the season due to the “Deflategate” nonsense. Jimmy G. started the first two games and played very well before injuring his non-throwing shoulder in the Dolphins game. Jacoby Brissett came on before he tore the ligaments in his thumb on his throwing hand.

Garoppolo practiced and was supposed to be the starter in Week 4 but bowed out at the last minute, forcing Brissett to play with torn ligaments in his thumb which rubbed Bennett the wrong way.

Bennett appeared as a guest on the “Double Coverage” podcast with Devin and Jason McCourty and pulled no punches with his thoughts on the situation.

“Bro, we lost two games (without Brady),” Bennett said. “One of them was because Jimmy Garoppolo was being a bitch. He quit before and decided not to play right before the game. Jacoby came out and played with a f***ked-up thumb and played his heart out, but Jimmy was just being a bitch about it all.”

“You can’t win with a bitch for a quarterback,” Bennett added.

Julian Edelman backed up Bennett’s stance during his own appearance on a podcast. As a guest on the “I Am Athlete” podcast, Edelman didn’t pull any punches either.

“I mean, I don’t know we’re all football players here,” Edelman said. “So we go into Week 4 and Jimmy was practicing and then decided not to play. Jacoby played with no ligaments in his thumb, which you can’t do that as a quarterback.

“A lot of guys got mad at it. I’m not going to lie, I got mad about it,” Edelman added. “I sacrificed my body all day long. I was taking shots for this, numbing up that, ribs, broken ribs, shoulders, Grade 3 hanging on by limbs just to play. I can understand why Marty thinks like that.”

With Garoppolo recovering from surgery and due a whopping $24.2 million this season, these comments can’t help the 49ers if they decide to trade him as 2nd-year QB Trey Lance is expected to compete for the starting job this year.

Deshaun Watson: The hearing with Judge Sue Robinson is over and now the league is awaiting her decision on how long Watson will be suspended…if at all.

There are two very, very, different opinions on how things will proceed in regards to any suspension for Watson. NFL insider Jason La Canfora believes that Watson will never suit up for the Browns, due to the sexual assault allegations.

Appearing on 93.7 The Fan, La Canfora was skeptical, “I don’t know if Deshaun Watson is ever going to play with the Cleveland Browns,” La Canfora said. “If he is told to sit on the sidelines for a year, what more comes out during that year?”

“I wouldn’t not hazard a guess on how many games he starts for the Browns,” La Canfora added. “I have to see him start one before I even consider it.”

Meanwhile, Mike Florio from NBC Sports, said that he wouldn’t be surprised if Watson isn’t suspended at all. Posting a written and video piece, Florio explained his position.

“(1) I take all possible agendas and biases into account before reporting anything; (2) I strive for accuracy, regardless of whether the source may coincidentally have an interest in the information being reported; and (3) no narrative or agenda means a damn thing, because Judge Sue L. Robinson eventually will determine the facts and then apply the Personal Conduct Policy to them.”

Florio added that he spoke with several people who said that they were concerned with the public’s reaction if Watson receives little to no suspension, especially since no “violence, threat, force or coercion” evidence, has come to light…yet.

Mac Jones:  The Patriots starting QB held another throwing session with some of the team’s wide receivers, this time in Carlsbad, California. While most of the players from the team are enjoying some family vacation time before training camp, Jones finished his early and hooked up with Nelson Agholor and Tre Nixon to get some extra work in.

It was interesting that Agholor, who is looking for a better 2022, and Nixon who had an outstanding minicamp this spring, were joining Jones. Both are looking for a big summer to cement roster spots this season.

Agholor has been the subject of trade scenarios, which would save the team nearly $9 million dollars in cap space if done. One scenario where he would be traded is if Nixon (whose spot is far from guaranteed) shows he can be a viable option in the passing game once the pads come on.

But it also shows Jones is embracing that leadership role that is needed in making the big jump that many are predicting for him in Year 2.  All three players have put the time in this offseason, so it is great to see them getting together.

Patriots 4th & 2 Podcast: If you haven’t checked out our PatsFans.com podcast, “Patriots 4th & 2”, in a bit, please check it out. The three of us broke down the Patriots’ offense heading into training camp. Tune in this week as we’ll do the same with the defense and special teams.

The Evolution of the Linebacker Position and (for once) The Patriots Are Behind the Power Curve:

The Patriots are making a lot of changes at the linebacker position in 2022, and regardless of how many people feel about the players no longer here (ditto), it was a change that is… in essence long overdue.

So, with Dont’a Hightower, Kyle Van Noy, and Jamie Collins gone, it leaves Ja’Whaun Bentley as the senior member of the position. That is a lot of experience gone, and the transition may be rocky, at least to start.

New England, under Bill Belichick, has always been ahead of the power curve when it comes to trends in the NFL. But in this case, they are lagging behind the trend of how linebackers have evolved in terms of size and speed.

The Patriots have always coveted big, physical thumpers at the linebacker position. Tedy Bruschi, Willie McGinest, Mike Vrabel, Ted Johnson, and Roman Phifer were stalwarts in the early Super Bowl teams. Their size and abilities matched up well with Belichick’s defensive philosophies that Daniel Jeremiah shared with people a few years ago.

Seth Galina from PFF wrote an excellent piece on how linebackers have evolved in the past 20 years, that is a great read.

But in the past 20 years, because of the changes offenses have made in the passing game, the league has changed the way it looks at linebackers’ size, speed, and athleticism.  Back in 2006, teams played in their base defense about 60 percent of the time. But the bigger strongside (SAM) linebackers were being slowly phased out as more and more teams were playing nickel and the SAM LBers were less utilized.

The SAM linebacker was a bigger player who would line up over the tight end and defeat blocks and cover in close proximity to the line of scrimmage. But those nickel defenses took out a SAM and replaced him with a fifth defensive back.

In 2016, teams were playing base defense only 29.3 percent of the time (via PFF stats). That number dropped to just 24 percent in 2020, which is a significant drop from just 14 years prior.

While the Patriots use nickel backs like any other team, Adrian Phillips played a lot of linebacker in the past two years, they have (until just recently) continued to draft bigger linebackers despite the rest of the league opting for smaller, faster backers.

The average LBer in the early-to-mid 2000s, was about 6’3, 245. Today they are averaging 6’2, 220 with the speed in the 40 similar to safeties a decade ago. Teams are moving away from the Tampa 2 defense, playing more quarters which means that the middle (MIKE) or inside linebackers have to cover TEs up the seam or backs out of the backfield.

While the Patriots still had big backers such as Hightower and Bentley inside, teams like Tampa Bay were playing  Devin White (6’0, 237)and Lavonte David (6’1, 233) and their athleticism and speed were on full display in the Super Bowl against Kansas City.

The Patriots’ defense was preyed upon down the stretch as speed at linebacker and in the slot was a tough matchup for a defense that was aging and slow.

Going into training camp, Bentley remains as one of the starters, but the team has invested in some linebackers who are more in line with the more modern backers around the league. Matthew Judon and Anfernee Jennings are more typical of the size the Patriots have used to play on the edge.

Will it work? We won’t know until training camp begins, but the trend of change is now among the Patriots’ inside linebackers. And it should be an intriguing area to watch, not only how they produce, but how they decide to adapt their philosophy.

“It depends on the person’s level of experience. Players that are experienced you can evaluate them. Players that aren’t experienced, you look at their development and see how that is tracking. We have quite a few guys back there, they’re in different stages of those categories. We will evaluate them on a case-by-case basis. We got a couple punters, so we got a lot of balls there, we’re punting them so might as well have some guys catch them.”