5 years ago at 7:00 am ET
Follow @AllThingsPats
Posted Under: Patriots News 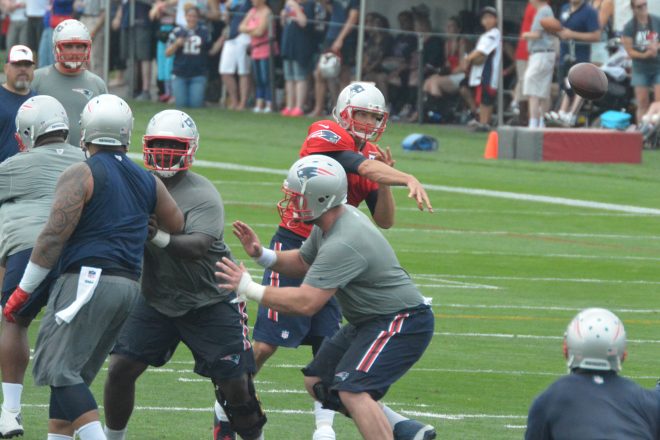 With the first week of free agency a distant memory and the draft now a distant speck in the rear view mirror, what does a fan of the New England Patriots do to satiate their appetite for news and information on their favorite NFL team? How about some podcasts to help fill the void prior to gearing up for the start of training camp?

Talking Patriots Salary Cap with Miguel Benzan
Patriots Fourth and Two Podcast, PatsFans.com – May 31 – 41:38
– Discussion with renowned salary cap expert Miguel Benzan. Listen to why Miguel feels that it is in Malcom Butler’s best interest to not hold out. Also, Miguel shares how it is possible for the Patriots to extend the contracts of Malcom Butler, Jamie Collins, and Dont’a Hightower. We also discussed in detail his latest article entitled “Patscap thoughts-Memorial Day 2016”.

Brady, OTAs and Contract Situations
Quick Slants, CSNNE – May 27 – 30:40
– Tom E. Curran and Phil Perry attended Thursday’s OTA session and offer their analysis on some of the new additions in Quick Slants the podcast. Also on the docket, a look at some upcoming contract situations for the team, Tom Brady’s 17th season and Robert Kraft taking legal action in support of Brady.

What can we take away from New England Patriots OTAs?
Kevin Duffy, MassLive – May 27 – 19:44
– Martellus Bennett impressed, Jimmy Garoppolo looked a year more mature, and a long list of New England Patriots weren’t even there, opening up opportunity for backups, particularly along the offensive line and in the secondary. So can we draw anything of substance from Day Three of OTAs? Kevin Duffy of MassLive and Mark Daniels of The Providence Journal discuss.

Mike Petraglia, Chris Price on Tom Brady, OTA, Deflategate
It Is What It Is, weei.com – May 26 – 9:33
– WEEI.com’s Mike Petraglia and Chris Price discuss the biggest takeaways from the first week of OTAs, which concluded Thursday with a two-hour workout that was open to the media. Some of the highlights included Tom Brady working closely with and throwing a touchdown pass to new tight end Martellus Bennett and the debut of rookie quarterback Jacoby Brissett. Brissett was intercepted once by top draft pick Cyrus Jones while throwing a touchdown pass to fellow rookie Malcolm Mitchell on a fade pattern. Petraglia and Price also discuss the latest developments in Tom Brady’s appeal, the Patriots joining the fight and what it means going forward.

Ted Olson discusses Tom Brady’s bid for rehearing
It Is What It Is, weei.com – May 26 – 19:41
– Ted Olson, who is serving as the lead counsel for Tom Brady in the quarterback’s fight against the reinstatement of the his suspension, joined Ordway, Merloni and Fauria Thursday to discuss his client’s recent appeal.

Patriots OTA Recap; Jim Breuer
PFW in Progress – May 26 – 2:02:10
– Listen to this edition of PFW in Progress as we recap Thursday’s Patriots OTA. Plus, We discuss comedian Jim Breuer’s interview on 98.5 The Sports Hub where he claimed to have met with a member of the Patriots equipment staff associated with deflategate.

OTA’s Begin For The Patriots
Patriots Fourth and Two Podcast, PatsFans.com – May 25 – 1:08:35
– In this episode, we discussed the latest in Patriots news which included Kevin Faulk being inducted into the Patriots Hall Of Fame, along with the latest in regards to Tom Brady and DeflateGate. Later on, we discussed the article from Steve Balestrieri entitled “The Five Things The Patriots OTA’s Should Feature”. We ended the show by answering your questions.

Chris Price talks to former Patriots backup QB Jim Miller about Tom Brady, Deflategate and how New England looks for 2016
It Is What It Is, weei.com – May 25 – 16:40
– Chris Price talks with former Patriots backup quarterback Jim Miller about Tom Brady and his mindset as he continues to battle Deflategate. Miller offers up his own thoughts on Brady’s play and what sets him apart from other signal-callers of his generation, and also talks about what it’s like picking out game balls with Brady. Miller also breaks down New England’s offseason to this point on the calendar, and offers his thoughts on which team might be poised to challenge the Patriots in the AFC East.

Brady’s Appeal; OTA Preview
PFW In Progress – May 24 – 2:01:20
– Listen to this edition of PFW in Progress as we discuss Tom Brady’s request for his appeal to be reheard by the 2nd Circuit U.S. Court of Appeals en banc. We also discuss what we are looking to see at Patriots OTA’s this Thursday. Plus, a wide variety of other Patriots and NFL topics.

Chris Price talks to Comcast’s Phil Perry on Tom Brady, latest Deflategate news, and how the 2016 roster is shaping up for the Patriots
It Is What It Is, weei.com – May 23 – 27:54
– Chris Price talks with Comcast’s Phil Perry about the latest Deflategate news, what’s next for Tom Brady and what chance he might have when it comes to playing in the opener. The two also take a look at some guys on the roster bubble and which rookies have the best chance of having an impact in 2016 and beyond.

Malcolm Butler with Butch and Tomase on contract: ‘I’m not going to discuss that right now’
It Is What It Is, weei.com – May 22 – 9:04
– Before attending an event at Premier Fence in Canton, Butler discussed his fortuitous arrival in New England, explained why he’s been so driven not to be defined as a one-hit wonder, and chafed when asked to address his rookie contract, which runs through the coming season.

Chris Price talks to Salary Cap Expert Miguel Benzan about dollars and sense of succeeding in the NFL
It Is What It Is, weei.com – May 20 – 27:34
– Chris Price talks with capologist Miguel Benzan of Patscap.com about some of the biggest misconceptions about the NFL salary cap, why some media members don’t want to talk to him, the Patriots cap situation for 2016 and beyond, and the looming payday for the likes of Dont’a Hightower, Jamie Collins and Malcolm Butler.

Faulk HOF; Around the NFL
PFW In Progress – May 19 – 2:00:40
– Listen to this edition of PFW in Progress as we discuss Kevin Faulk’s election to the Patriots Hall of Fame and which other players are worthy of enshrinement. Should the NFL remove kickoffs from the game? Plus, a wide variety of other NFL topics.

Faulk’s HOF Call; Rookie Talk
Patriots Playbbok – May 18 – 2:03:30
– Listen to this edition of Patriots Playbook as John Rooke discusses Kevin Faulk’s election to the Patriots Hall of Fame and what other players should be considered for enshrinement. Plus, we discuss the rookies and latest Patriots news. Our guests today are PFW’s Erik Scalavino and Russell Baxter from ProFootballGuru.com.

It Is What It Is Cast – Ian Rapoport
It Is What It Is, weei.com – May 17 – 32:12
– Chris Price talks with Ian Rapoport of NFL Media about the Patriots offseason, the major questions facing the team going forward, the health of receivers Julian Edelman and Danny Amendola and the mindset of quarterback Tom Brady as he continues to fight Deflategate.

Patriots Central Radio
@SteveB7SFG and @TMurph207 – May 17 – 1:03:16
– Tonight On @PatriotsCentral Steve and Murph are joined by Jeff Howe of The Boston Herald and Murph gets called out by ESPN’s Screaming A Smith.

WR Injuries; Gronk in GQ
PFW In Progress – May 17 – 2:01:20
– Listen to this edition of PFW in Progress as we discuss Danny Amendola and Julian Edelman, who have been reported to have had surgeries recently. We also discuss Rob Gronkowski in GQ, as well as a variety of other topics.

Breaking down the Patriots offensive depth chart
Pats Pulpit – May 17 – 33:34
– The New England Patriots have a lot to overcome on the offensive side of the ball. Quarterback Tom Brady might be suspended for four games. Running backs Dion Lewis and LeGarrette Blount are returning from the injured reserve. Wide receiver Julian Edelman and Danny Amendola are still recovering from offseason surgeries. The offensive line is still a major question mark..

The Drew Bledsoe Interview
It Is What It Is, weei.com – May 12 – 48:09
– Kirk Minihane talks with former Patriots QB Drew Bledsoe about his relationship with Bill Parcells and Bill Belichick. Drew also shares his thoughts on Tom Brady and talks about the forgotten greatness of Ben Coates.

Rookies in the house, Edelman’s foot
PFW In Progress – May 12 – 1:59:18
– In this edition of PFW In Progress, Fred Kirsch, Paul Perillo, Andy Hart, and Erik Scalavino discuss the latest report on Julian Edelman and much more.

The Latest in Patriots News
Patriots Fourth and Two Podcast, PatsFans.com – May 11 – 58:59
– In this episode, we discussed the trade of Patriots linebacker Jonathan Bostic, and also the restructured contract of Danny Amendola. Later on, we had several subjects we debated in a section we call the Patriots Fourth And Two Roundtable. I invite you to listen to one of our best episodes.

Rookie Talk; Tom Brady’s Mattress Commercial
PFW In Progress – May 10 – 1:59:50
– Listen to this edition of PFW in Progress as we discuss a wide variety of topics such as what we can expect from the Patriots rookie class, Tom Brady’s mattress commercial and more. Plus, is defensive end now the biggest area of need?

Chris Price, Mike Petraglia talk coaching staff changes, wrap up draft
It Is What It Is, weei.com – May 5 – 10:05
– Mike Petraglia and Chris Price break down the return of offensive line coach Dante Scarnecchia and what it means to the future of the offensive line, as well as new safeties coach Steve Belichick and his football relationship to his dad. They also recap the Patriots 2016 draft and what to expect from some of the higher profile selections in their upcoming rookie season.

2016 Patriots Draft Recap
Quick Slants, CSNNE – May 5 – 43:56
– Steve Palazzolo of Pro Football Focus gives his breakdown of some of the Patriots’ 2016 draft picks. Plus, Phil Perry and Mike Giardi debate the future of Jimmy Garoppolo.

DeflateGate: Despite Savvy Draft Trade, Patriots are Still Punished in the 4th Round
Pats Pulpit – May 4 – 52:04
– The Patriots were smart enough to add a 2017 4th round pick- but that doesn’t free them entirely..

Patriots Draft Review
Patriots Fourth and Two Podcast, PatsFans.com – May 2 – 1:27:12
– In this episode, we analyzed all of the Draft Picks for the Patriots. This is my favorite espisode ever of Patriots Fourth And Two, because we give you the type of talk and analysis I had hoped for when we started this show over four and a half years ago. I invite you to listen!

Patriots Draft Analysis
PFW in Progress – May 2 – 2:00:10
– Listen to this edition of PFW in Progress as we recap a busy Patriots Draft weekend. We offer our analysis on all the picks. Plus, we take a look at which undrafted free agents could be signing with New England.

Sally Jenkins Talks Tennessee, NCAA Pay, Deflategate, Joe Paterno, and Lance Armstrong
The Big Lead – Feb 25 – 37:23
– Washington Post sports columnist Sally Jenkins joins the podcast this week. Sally wrote a great column on the allegations at University of Tennessee, Peyton Manning, and Jamie Naughright this week. We started by discussing that, and also addressed these columns she has written: (1) Why I’m not angry at Lance Armstrong; (2) Joe Paterno, at the end, showed more interest in his legacy than Sandusky’s victims; (3) DeflateGate exposed Roger Goodell as unfit to serve his office; (4) More questions than answers from NLRB ruling on Northwestern football players; (5) College athletic departments are paying themselves to lose money (based on this project by Will Hobson).

Full list of all Patriots Fourth and Two podcasts.

By: Steve Balestrieri
The Patriots invested big money in a pair of tight ends and that is where the offense is supposed to be going through in 2021.
7 days ago

Best Of Social Media: A Look Inside The Second Week Of Patriots OTA’s

By: Robert Alvarez
The best social media postings from the second week of Patriots OTA's.
1 week ago