On Wednesday, veteran safety Malcolm Jenkins formally announced his retirement from the NFL after 13 seasons.

“I played the game at the highest level for 13 seasons,” Jenkins said on The Pivot podcast. “And I have accomplished Super Bowls, Pro Bowl, all that there is to do in this game. And when I came in, I always wanted to make an impact on the game on and off the field. And I just feel like at this point I’ve accomplished that.”

Jenkins, a first-round draft pick of the New Orleans Saints in 2009, played for the team through 2013 before signing with the Philadelphia Eagles, staying there through 2019. Over his final two NFL seasons, Jenkins returned to the Saints from 2020 to 2021.

During his NFL career, Jenkins won two Super Bowl titles, one with each team (2009 with NO and 2017 with PHL).

Following the news of Jenkins’ retirement, Patriots safety and team captain Devin McCourty shared his reaction to the news over Twitter.

My guy @MalcolmJenkins enjoy retirement man…Since governors bowl in 05 to watching you put on in college and the league it’s been a pleasure. Won’t find a better leader on and off the field. Thanks for setting the example.

McCourty himself was a part of retirement rumors this past winter, but those were put to rest once he agreed to return to the Patriots on a one-year $9 million deal back on March 13th. 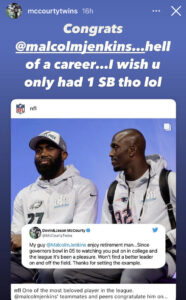