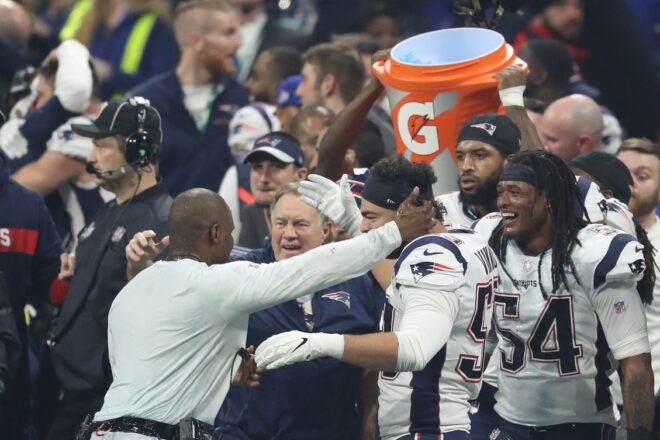 Brian Flores has been very vocal in the early portion of his lawsuit, with the former Dolphins coach making his rounds in the media as he begins what is shaping up to potentially be one of the toughest legal battles the league has ever seen.

And so far, Flores is burning it all down and it looks like he’s not afraid to take one of his former employers with him.

For those who were unaware, texts from Bill Belichick are in the spotlight of this case.  The New England Patriots coach reportedly texted Flores two days before his interview with the Giants to let him know that the club was already favoring him for the job.  The only problem is, he wasn’t referring to Flores, but instead was apparently referring to Brian Daboll, who he later clarified when Flores questioned the text.

Flores included that text exchange in the lawsuit and it’s gone from what appeared to be a misunderstanding, to a situation where Flores appears to believe his former colleague is part of what’s wrong with the league’s hiring process.

The former Patriots coordinator spoke on “The Limits” podcast on Thursday saying that even despite the slip, he believes that Belichick potentially played a role in him not getting the position.

“I think there are back channel conversations and back channel meetings that are had that oftentimes influence decisions,” said Flores via Yahoo! Sports.  “I think [the Giants hiring process] is a clear example of that. Bill Belichick is a clear example of that. His resume speaks to that. It was clear to me that decision was made with his influence.”

“That’s part of the problem. That needs to change. There needs to be a fair and equal opportunity to interview and showcase your abilities to lead and earn one of those positions.”

While Flores overall has some strong points with his lawsuit, his assertion is a bit of a reach.  Like most employers, businesses tend to do their due diligence when it comes to the hiring process, especially when it comes to a commitment like hiring a head coach. With that in mind, the Giants inquiring about both Daboll and Flores makes sense considering the two worked under Belichick previously.  Since both came up the ranks under his leadership, he would certainly know them well enough to provide an opinion.

Belichick’s history on the coaching staff in New England when it comes to coaches of color also hurts Flores’ argument, given the number of coaches who have been and continue to be on the staff.  He also played a role in former coordinator Romeo Crennel eventually becoming a head coach, which is more proof that as far as Belichick is concerned, race clearly wasn’t an issue in that recommendation.

As a result, the statements that Belichick “is a clear example” of the problem in the hiring process appear to be quite out of line, and it’s likely that Belichick probably isn’t too pleased about that.

Needless to say, Flores is currently burning down a league that certainly has its issues, but trying to burn down Belichick with it makes little sense.

Worse yet, Belichick may have been the only one who could have potentially brought him back as a coordinator while allowing him an opportunity at being able to overcome the animosity this suit is likely to create.

Unfortunately, Flores appears to have taken a blowtorch and lit that option on fire, with his chances at a return to New England likely burning down with it.

How Was This Article?
Posted Under: NFL Commentary
Tags: Bill Belichick Brian Flores

By: Robert Alvarez
Patriots Chairman and CEO Robert Kraft is honored by two organizations for his charitable and humanitarian work.
9 hours ago

By: Robert Alvarez
Bill Belichick issues a statement praising Vince Wilfork following his selection into the Patriots Hall of Fame.
11 hours ago

By: Russ Goldman
In this episode, Steve and Derek break down the 2022 Patriots regular season schedule. The guys also discuss Vince Wilfork's election into the team Hall…
21 hours ago