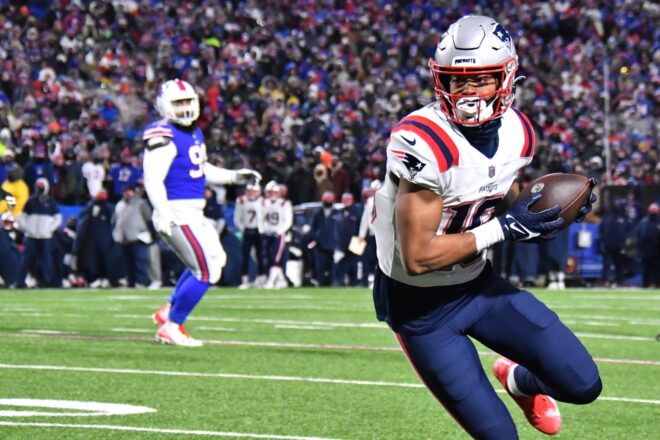 A few weeks ago, I wrote that the loss to Buffalo was ugly…U-G-L-Y was the way I believe I characterized it. That game, in contrast to the one of Saturday night, was a Picasso. The Patriots weren’t just bad on Saturday in Buffalo, they were historically bad.

The Bills kept pouring it on, trying to erase two decades of frustration and heartbreak. As they should have. Some fans and media were quite upset with it, forgetting perhaps that when Tom Brady and Co. were torturing the Bills so many times, the refrain from New England was always, “It isn’t the Patriots job to stop their own offense from scoring, it is the defense’s.” Well, just like Bill Belichick did to Joe Gibbs, Sean McDermott did to him. It was that ugly.

Buffalo had the ball seven times and scored seven touchdowns. Yes, they kneeled down in the last minute and a half. Prior to Mitch Tribusky taking a knee, they were 6-6 on third downs, which is telling in more ways than one. In a game where they scored seven offensive touchdowns, they faced third downs only six times.

Josh Allen sliced and diced the defense that brought me back to the Patriot defenses of the late ‘60s and early ‘70s. Allen threw more touchdowns (5) than incompletions (4). The front seven was gashed for 174 yards rushing. They got zero (0) sacks, zero (0) interceptions, and just one QB hit.

The running game was stifled and the QB was under duress for much of the night. And the special teams? Other than two blocked extra points…a disaster.

I’m ready to look at the grades if you are…

The first drive started well enough. On third down, he scrambled away from pressure and hit Hunter Henry for a 30-yard completion. Then on a 3rd and 10, he was flushed and ran (gasp!) for 16 yards. Josh McDaniels then schemed up a play where Brandon Bolden was wide open down the field, and he dropped it. Then Jones tried a deep ball to Nelson Agholor that was picked off on a fantastic play by Micah Hyde, who flew over from his safety position to snatch the ball away from Agholor.

Any BS that the ball wasn’t well thrown is just that. He dropped it in the bucket. And while you could argue the WR should have high-pointed the ball is taking away from the play Hyde made.

Jones’ second INT was a mistake of trying to squeeze the ball into too tight of coverage. It was tipped straight up and intercepted. But the rookie battled hard and after rewatching the game (yes, I’m a glutton for punishment). It seems like when the Patriots were in 11 personnel, he was much more effective (20-27 by my count, which was unscientific). That’s something to look for more of (as well as 12 personnel) in 2022.

Rhamondre Stevenson and Damien Harris combined for just 17 carries, and while the score no doubt had something to do with it, they just didn’t do much when their numbers were called. Harris (9-30 yards, 3.3-yards per carry), Stevenson (8-27 yards, 3.4 yards per carry), were just not effective.

Harris’ run where he was chased out of bounds by Mario Addison was an example of them just not doing enough. That play ended up making it 4th and 1 and the coaches didn’t trust their “power running identity” to get a single yard.

Bolden’s drop of a big play was another sign of the impending disaster that was to come. But he and Stevenson combined for 8 catches for 60 yards which pumped up the grade. Jakob Johnson had a false start and a dropped pass. When the Patriots were in 22 personnel, they averaged just a tad over 2 yards per carry.

Kendrick Bourne had a very solid game and battled all the way through (can’t say that for everyone). He ended up with 7 catches for 77 yards including two touchdowns. He and Jones have a nice chemistry going that should be better served in 2022. He added a 14-yard run. He gets high marks

Jakobi Meyers had six catches for 40 yards but had several drops. While Agholor had only a single catch for 18. N’Keal Harry wasn’t targeted and one has to wonder why Kristian Wilkerson was a healthy scratch when they had to know they were going to have to throw the ball during the game…

Hunter Henry started the game nicely, with a 30-yard reception. Then, the tight ends weren’t factors at all. Henry dropped a low pass in the end zone, but it is a catch that he can and has made. But it was garbage time and anyway Bourne caught a touchdown on the next play.

Jonnu Smith wasn’t targeted although he protested by leaping high and tipping a pass that was meant for Meyers. The spacing looked a bit out of whack on that play, but then again the whole team appeared out of whack.

The offensive line didn’t have a good night, they couldn’t handle the speed of Buffalo’s defense. They averaged just 3.4 yards per rush against a team that they ran for nearly 400 yards in the two previous games. Jones was sacked three times, with one coming on a fake spike…ouch. He was under duress all game and that’s why we saw him running more (for his life).

Those were the high marks…now for the others.

The defensive line was absolutely trucked in the ugliness of this one. No sacks, no QB hits, no tackles for a loss. None. The Bills in 19 possessions over two games haven’t had to punt. And the Bills rushed for 174 yards with Devin Singletary rushing for 81 yards and 5.1 yards per rush. Gap discipline was non-existent as Allen gashed them for 66 yards on 6 carries. Disastrous outing.

The linebackers were an even bigger disaster. Dont’a Hightower and Jamie Collins looked like they were running in cement. They were of no help in the running game and in coverage…it was what one would expect in giving up 47 points.

Matthew Judon, who has been invisible for several weeks, had the Patriots’ only QB hit of the game. No pressure, no sacks, no gap discipline either.

The secondary makes it a perfect storm. Did I mention that Allen had more touchdowns than interceptions? Well, he was an equal opportunity human torchbearer on Saturday night. Because he roasted every member of the secondary at times. No matter who or what they rolled out, he dusted them…with surprising ease. Maybe it shouldn’t be.

J.C. Jackson was torched on 4-5 for 89 yards and a touchdown. And he’s the team’s shutdown corner. Joejuan Williams who may have played his last game as a Patriot was absolutely smoked by Emmanuel Sanders for a TD. To say that Allen and the Bills had figured out the matchups is almost comical. That’s how historically bad this beatdown was. Is there such thing as an F-?

The Patriots’ Special Teams benefitted from two blocked extra points, Nick Folk being Nick Folk from making the defensive side of the ball a unanimous “F-Bomb”. Gunner Olszewski didn’t return a kick past the 24-yard line. Micah Hyde isn’t even Buffalo’s punt returner and he took one back 52 yards and would have scored but his own teammate tripped him. Jake Bailey did drop two punts inside the 20.

The Patriots’ coaching staff was outcoached once again. Buffalo had all the mismatches that they wanted and the Patriots were looking hapless to stop them. The offense couldn’t generate anything until the game was out of hand. Special Teams continued to be a disaster. The team was overmatched but we have come to expect them to scheme things up to mitigate that…they didn’t. And once again the decision to play Harry over Wilkerson (not that it would have made the slightest difference), was not a good one when your QB is having to fling the ball around.

We’re on to the offseason and lots of questions.