1 year ago at 6:48 am ET
Follow @SteveB7SFG
Posted Under: Patriots Commentary 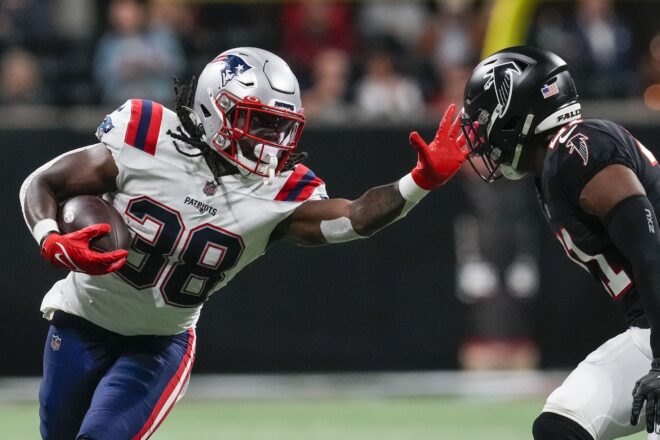 The Patriots head down to Miami to close out the 2021 regular season to take on the Dolphins.

Late season games in Miami have not been kind to the Patriots under Bill Belichick. The team is just 2-7 in regular-season games in December and January when traveling to South Beach.

Miami beat New England in the season opener 17-16 when a late fumble by Damien Harris stopped the Patriots at the Miami 9-yard line with about 3 minutes to go in the game. The Patriots and Dolphins have split the season series the past four years. Miami hasn’t swept the Patriots since the 2000 season.

Patriots (10-6) – Beat the Jacksonville Jaguars 50-10 as the offense scored the first five times they had the ball while the defense notched three interceptions.

Dolphins (8-8) – Lost to the Tennessee Titans 34-3 snapping a seven-game winning streak and knocking them out of playoff contention. The defense allowed 198 yards on the ground while QB Tua Tagovailoa threw an interception and fumbled three times.

This week’s game will be broadcast by CBS. Spero Dedes will handle play-by-play duties with Jay Feely as the color analyst. Jenny Dell will work from the sidelines. The game can also be heard on 98.5 the Sports Hub. Play-by-play will be by the voice of the Patriots, Bob Socci along with former Patriots quarterback Scott Zolak, who will provide color analysis. The games are produced by Marc Cappello.

The Patriots’ running game when they have their 1-2 punch of Damien Harris and Rhamondre Stevenson has been tough to stop. Harris, however, has been bothered by a hamstring injury which he reinjured against the Jaguars, so he may be limited in an attempt to get him ready for the postseason.

Miami runs a base 3-4 and their players upfront (Raekwon Davis, Emmanuel Ogbah, and Christian Wilkins) are good at slowing down the run allowing the linebackers to clean up.

Look for the Patriots to force the issue on the ground and try to catch the Dolphins in one of their many blitzes. Stevenson and Bolden will probably get the bulk of the carries.

The Patriots’ passing game with Mac Jones should be back to full strength as Nelson Agholor has returned to practice after missing the past two games in the concussion protocol. Jones threw for 281 yards in the opener and targeted tight ends Jonnu Smith and Hunter Henry eight times and completed all eight for 73 yards. Kendrick Bourne and Jakobi Meyers have been his favorite go-to targets, however.

The Dolphins pass defense is greatly assisted by a blitz-heavy pass rush that has sacked opposing QBs 45 times. They do a great job of disguising their looks and send extra rushers from all over. However, the secondary is solid with cornerbacks Xavien Howard and Byron Jones, and safeties Brandon Jones, Eric Rowe, and rookie Jevon Holland.

Look for Miami to send extra rushers all game long against Jones while trying to disrupt the passing game. How well the Patriots’ offensive line does against these pressure packages will go a long way in deciding this one. Bolden could factor large in this one with screens out of the backfield.

Next up is the Dolphins offense:

The Dolphins running game has been an issue all year, with the play of the offensive line being a big part of why they rank 31st in the league averaging just 85 yards per game. Myles Gaskin and Duke Johnson handle the running game but they haven’t been able to consistently give the Dolphins the running game to keep the heat off of the QB.

The Patriots rush defense has been up and down all season but the front seven led by Lawrence Guy, Davon Godchaux, and Christian Barmore should be plenty stout enough against Miami’s OL to slow things up for Dont’a Hightower and Ja’Whaun Bentley.

Look for the Dolphins to spread out the defense and try to use quick hitters with Johnson and Gaskin to get their running game going. A big factor in both the running and passing game this week is whether Kyle Dugger is able to go, he was absent from practice Weds. with a hand injury.

Miami’s passing game with Tua Tagovailoa, Devante Parker, Jaylen Waddle, and Mike Gesicki should be a lot more productive than it is (221.8 yards per game, 6 yards per pass). Part of it has to do with the offensive line, Miami QBs have been sacked 39 times. With Miami getting rid of the ball quickly on quick crossers and slants, that number is extremely high.

The Patriots may possibly be missing two key parts of their secondary this week as Dugger has a hand injury and slot corner Myles Bryant is on the Reserve COVID list. The key for the Patriots is getting pressure on Tagovailoa with Matt Judon, Kyle Van Noy and forcing him into making mistakes.

Waddle needs one catch and 12 yards to reach 100 catches and 1,000 yards for the season. It will be interesting to see who the Patriots matchup J.C. Jackson with, either Parker or Waddle. If Dugger can’t go, the Patriots will have issues with Gesicki. It all comes down to pressure.

The Patriots’ Nick Folk and Miami’s Jason Sanders are both having excellent seasons and are evenly matched. Ditto for punters Jake Bailey and Miami’s Michael Palardy. Neither team is generating much in the return game and both have solid coverage units.

This one should be a close defensive game, where 3rd down and red zone efficiency will be the key to winning and losing this week.

Run the Ball and Control the Tempo – The New England running game has the ability to negate those Dolphins’ blitzes. But recognizing tendencies and taking advantage of them is not going to be easy. The battle along the offensive line will be one to watch along with the ability of Stevenson to break tackles and make yardage after contact.

Play Action Passing Key – If the running game can get going, that will open up play-action passing. Having Agholor back will definitely help in opening up some passing lanes. One player to watch is Jonnu Smith. He had six touches (5 catches and 1 rush) in the season opener. He could be an “X-Factor” in this matchup. Will Kristian Wilkerson be active again or will N’Keal Harry return to the field after being a healthy scratch?

Bring Pressure on Tua and Force Turnovers – The Patriots pass rush needs to force the issue against Miami’s offensive line. Judon, Van Noy, and possibly Josh Uche as well as Chase Winovich who looked good last week can force the issue and make Tagovailoa to get rid of the ball quickly.

This should be another tough, low-scoring defensive matchup. Finishing drives and converting 3rd downs will be keys to winning or losing this game.

The Patriots’ defense will have to make one big stop at crunch time to hold off the Dolphins. Miami hasn’t been a good place for the Patriots to play late in the season, but this week, I think they answer the bell and move into the postseason in a good place.  Patriots 24-17