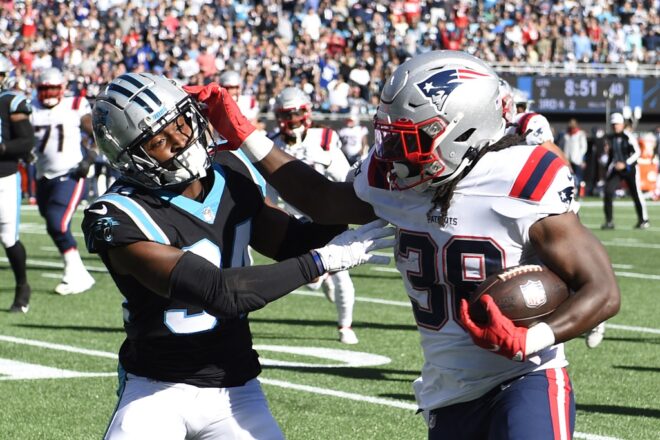 Patriots Did Exactly What They Needed To Do

The Patriots took care of business on Sunday, jumping all over an opponent’s weaknesses and then ensuring that they controlled the game down the stretch, which they did. Never at any point did you feel watching this one that the Panthers were in danger of taking it over.

Carolina’s defense is very good but their offense is very, very weak and it showed, all game long. Sam Darnold is struggling mightily these days and in four games against the Patriots has had some of his worst days as a professional. Sunday was no exception. Carolina’s best offensive weapon, Christian McCaffrey was just coming off of IR and the Panthers were trying to ease him back in the lineup. Good for the Patriots …bad for the Panthers.

In fact, Carolina’s only two scoring drives…off turnovers by the Patriots both came inside of Patriots territory and their two field goals were kicked after both drives netted 15 yards combined. The Panthers were able to muster only 240 yards of offense. The Panthers’ first seven (7) drives netted a combined 34 yards. That is some suffocating defense, regardless of the opponent.

Offensively, the Patriots weren’t able to pass the ball, but once they got ahead, they didn’t have to and leaned on the running backs to get it done. Penalties and turnovers were still a factor (more below), but they controlled this one throughout.

So, here are our positional grades this week for the Patriots-Chargers game.

Mac Jones was responsible for two turnovers, one was his fault and the other not so much. But he only completed 12-18 for 139 yards with a touchdown and interception with a passer rating of 85.2. For the second week in a row, Jones wasn’t asked to do much and just be a game manager, relying on the running game.

On the two turnovers, the first, a blindside strip-sack was on Isaiah Wynn as he whiffed completely. Could Jones have gotten rid of the ball quicker? Possibly but he hit far too quickly. The interception was completely on him. Jakobi Meyers was rerouted at the line, but Jones was going to him all along and stared him down. Stephon Gilmore read it perfectly and jumped the route, resulting in an easy interception.

But on both TD scoring drives he found his running backs for big gains. He hit Rhamondre Stevenson on a play that he said afterward was unscripted but it was a good decision and excellently conducted for a 41-yard gain. Later he hit Brandon Bolden on a 28-yard wheel route down the right sideline beating Shaq Thompson. He later hit Hunter Henry on a bullet for a touchdown on 3rd and goal.

Rhamondre Stevenson had his best game as a pro, rushing 10 times for 62 yards and adding 44 more on two catches. He flashed his ability in the open field and showed how difficult he can be to bring down in the open field. Unfortunately, he suffered a head injury in the second half and didn’t return.

Brandon Bolden had a very nice game showing good patience and vision in the running game and chipping in with a big pass reception on a scoring drive. Since filling in for James White (IR), Bolden has embraced the 3rd down role. Carolina did a good job of bottling up Damien Harris (15 carries, 30 yards), but he did score a touchdown. He was injured also with a possible concussion. The running backs ran 36 times for 154 yards before Hoyer’s kneel-downs and accounted for 80 percent of the Patriots’ offense.

The wide receivers had a total of four catches for 42 yards…that’s it. Kendrick Bourne had three of them for 34 yards. Jakobi Meyers had only one catch where he bobbled it before pulling it in, which cost the team a 3rd down conversion. Nelson Agoholor was targeted only once and drew a defensive pass interference penalty.

The Panthers’ pass rush kept Jones off balance all game long but the bottom line is they should be producing more than four catches.

The tight ends were only targeted five times, however, Hunter Henry scored a touchdown in the red zone, doing a good job of boxing out his opponent and hauling in a 3rd and goal pass from Jones for the score. He finished with 2 catches for 19 yards including the 7-yard touchdown on three targets.

Jonnu Smith was only targeted twice and had one catch for four yards and added a four-yard run. 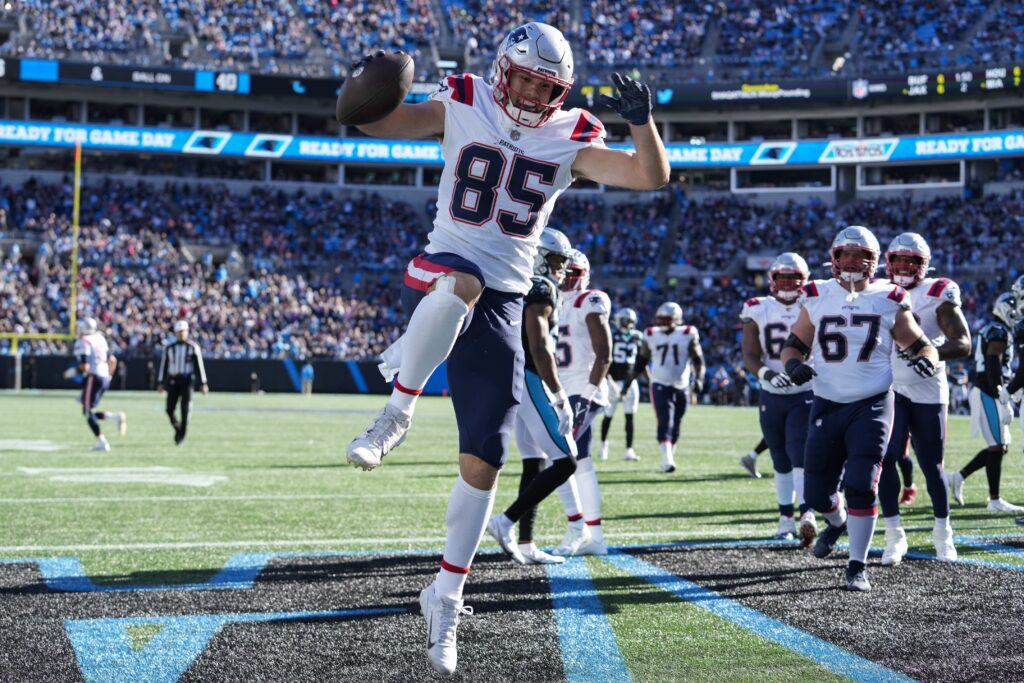 The offensive line was a mixed bag on Sunday, although the Panthers are a tough defense, especially against the pass, their run defense can be had, and the Patriots’ offensive line did a good job of taking care of that. They ran the ball consistently well all day long, attacking the edges hard.

Pass protection was another matter, Jones rarely had time to throw, and although he was only sacked twice, he was under duress all game long. The Patriots had six penalties on offense and nearly all of them were on the offensive line.

The big men on the defensive line had a tremendous day, they bottled up the Panthers running game and held Carolina to just 3.4 yards per carry in the running game, and were putting consistent pressure on Sam Darnold in the passing game.

Christian Barmore is consistently improving every week and the rookie drew rare praise from Bill Belichick. “He’s worked extremely hard,” Belichick said. “I’ve got to give that kid a lot of credit. He comes in early. He stays late. He works on his flexibility, his strength, his technique. He’s really applied himself and he’s just gotten better and better every week in the running game, in the passing game, more discipline, use of hands, recognition of plays. He’s done a good job for us and he’s a big man.”

Deatrich Wise, Davon Godchaux, and Lawrence Guy all had run stuffs and were dominating at the point of attack. It didn’t hurt that the Panthers lost two of their starters to injury early in the game.

How many times does Matthew Judon have to be held blatantly before he gets a holding call? He was a constant menace in the backfield and eventually got the team’s only sack of Darnold but they pressured Darnold all day long and did a great job of helping bottle up McCaffrey until late in the game. Kyle Van Noy had two passes knocked down, while Dont’a Hightower was solid.

Jamie Collins came up with an absolutely sick interception, leaping high into the air to bat down a pass at the line and somehow came down with the ball without even a deflection.

“The play Jamie made,” Belichick said about the interception, “I don’t know how many players in the league could make that play. Not very many. That was a tremendous play.” 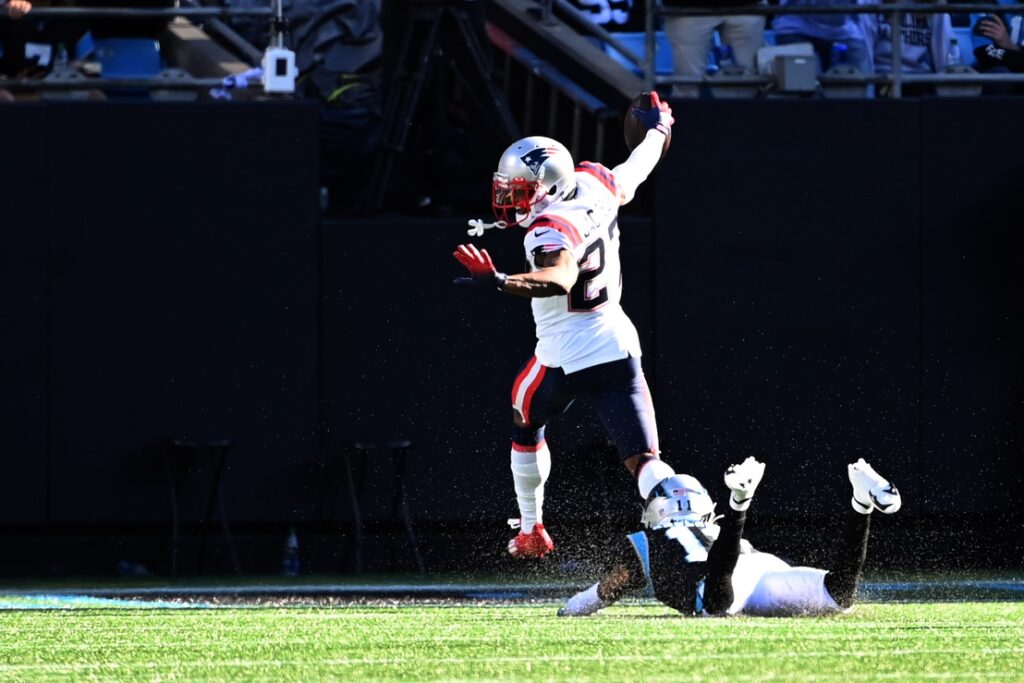 J.C. Jackson had himself a day. After missing practice for a couple of days with strep throat, he intercepted Darnold twice, once in the end zone to end a drive and another on a pick-six where he raced 88 yards for a touchdown.

We mentioned earlier, the Panthers’ offense is not good, well the proof is in the pudding. Darnold targeted his WRs 13 times and only completed 5 for 40 yards. He averaged only 5.2 yards per attempt and ended up with a passer rating of 26.7.

Gunner Olszewski was in the midst of another good day, he returned a kickoff 30 yards, and had two punt returns for 35 when he was concussed and fumbled. That ended his day. Jake Bailey pinned the Panthers deep a couple of times, and Nick Folk missed a field goal, a 54-yarder that went wide right. Overall, however, it was a good solid day for the special teams.

The Patriots’ coaches weren’t messing around, they saw what was working and stuck with it. They wanted to take away the run and force the ball into Darnold’s hands and that’s exactly what they did. Darnold and the Panthers’ passing game was held in check until the 4th quarter when he began to (finally) find McCaffrey, but by then it was far too late.

Offensively, they relied on the running game (39 runs to 18 passes) and kept the chains and clock moving. It wasn’t perfect but it was plenty good enough

We’re on to the Browns back at Gillette Stadium