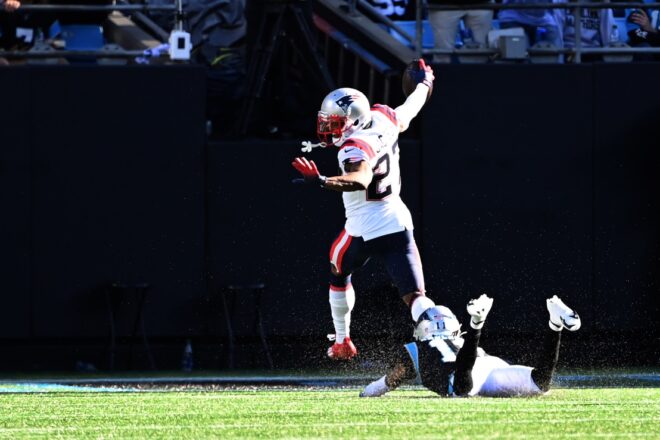 The Patriots weren’t sure who they would be facing from the Carolina Panthers offense on Sunday afternoon. Quarterback Sam Darnold took a nasty hit last week and spent the week in concussion protocol as well as was nursing a sore throwing shoulder. Running back Christian McCaffrey was activated off of IR and was a game-time decision.  It was thought having both players active would make a big difference in the way the game played out.

Both ended up playing for the Panthers, but in the end, neither made any difference as the Patriots defense stifled the Panthers offense all game long and held them to just two field goals en route to a 24-6 win, their third win in a row and their fourth in a row on the road.

Darnold probably wishes he took the week off as his nightmarish struggles against the Patriots continue. Darnold finished 16-33 (48.5 percent), for just 172 yards with 0 TDs and 3 INTs for a passer rating of just 26.3. Carolina finished with just 240 yards of offense. And that bears mentioning, for as good as that Panthers defense is, the offense of Carolina is completely discombobulated right now. They have virtually no passing game. So, while some will pooh-pooh the Patriots’ defensive game, pointing out the futility of Carolina’s offense, it was a great effort regardless.

The Patriots running game had arguably their best game of the year, grinding out 154 yards until three Brian Hoyer kneel-downs at the end of the game. Mac Jones didn’t do much…he didn’t have to, the game was well in hand and Carolina was playing from behind since early in the second quarter.

-The victory may have been a costly one for the Patriots, Damien Harris, Rhamondre Stevenson, and Gunner Olszewski all left with head injuries. We’ll have to monitor the injury reports for the upcoming week before Cleveland comes calling.

-The offense was shooting themselves in the foot with far too many penalties, early in this game. They had four penalties in the first two drives, constantly putting themselves behind the chains. Penalties sabotaged excellent field position after Olszewski returned a punt 18 yards out to the 40-yard line.

– Then the Panthers strip-sacked Mac Jones, recovering the ball at the Patriots’ 33. The Panthers would only manage about 12 yards before Zane Gonzalez kick a 39-yard field goal to give Carolina an early 3-0 lead.

– But the Patriots answered with a nice scoring drive. Jones hit Kendrick Bourne for nine yards and then Jones converted on a QB sneak for a first down. The Panthers blitzed and the Patriots picked it up just long enough for Stevenson to sneak out of the backfield into the flat. He took off with a lot of green in front of him and rumbled 41 yards to put the Patriots in business.

He carried three more times for 21 yards before Damien Harris powered it in from the three-yard line to put the Patriots up for good 7-3. Stevenson, prior to getting hurt had an outstanding game, rushing 10 times for 62 yards and adding 44 more through the air on two catches.

-Jones was picked off by Stephon Gilmore on a 2nd and 7 around midfield and returned it to the Patriots 34-yard line. But due to a penalty, Carolina only got to the Patriots 31 where Gonzalez kicked a 49-yard field goal to narrow the lead to 7-6.

-Jones and the Patriots answered once again, moving 75-yards in 10 plays eating up 4:04 of the clock, and scoring a touchdown with just 24 seconds left in the half. The big play was a 3rd and 5 from the Patriots 30 where Brandon Bolden burned talented LB Shaq Thompson on a wheel route for 28 yards. The running game chewed up some clock and kept the chains moving. On a 3rd and 5 from the Panthers’ 7-yard line, Jones fired a laser to Hunter Henry for the touchdown making it 14-6 at the half.

-Carolina and New England traded possessions before the Panthers began to move the ball. Darnold hit Chuba Hubbard with a 33-yard short pass out of the backfield, where he chugged down the left sideline. Darnold then hit D.J. Moore for 13 more and the Panthers had their best drive of the day going when disaster struck.

Darnold rolled out to his left under pressure and lofted a pass too high for his receiver and J.C. Jackson picked it off at the Patriots’ 12 and rolled 88 yards for a touchdown that pretty much put this one away making it 21-6. Jackson had two interceptions on the day after missing practice nearly all week with an illness.

-After the pick-six, the Panthers had a 3rd and 13 at their 47 when Darnold tried to throw it over the linebackers to an open receiver. But Jamie Collins made a fantastic play, leaping high at the line of scrimmage, and not only got his hands on the ball but was able to haul it in turning it over again. The Patriots were able to turn it into three points as Nick Folk kicked a 34-yard field goal to make it 24-6.

The Panthers used (finally) Christian McCaffrey in the passing game and he picked up 40 yards in two successive catches. Darnold then hit McCaffrey for 17 more but then as he tried to throw it in the end zone, Jackson undercut the route and intercepted his second pass of the day ending the threat.

-Although the Patriots only sacked Darnold once, they had him under pressure all game long and were forcing him to scramble to stay alive. Matthew Judon had the only sack but once again appeared to be held far too often (and not being called).

For a team that started 1-3, all of a sudden this Patriots team is now 5-4 and on a roll, winning three games in a row, and four of their last five. With Buffalo’s loss to Jacksonville, the Patriots are now just a game behind the Bills in the division, it has been a crazy NFL season. But for the Patriots, another tough test with the Browns awaits next Sunday in Foxboro.