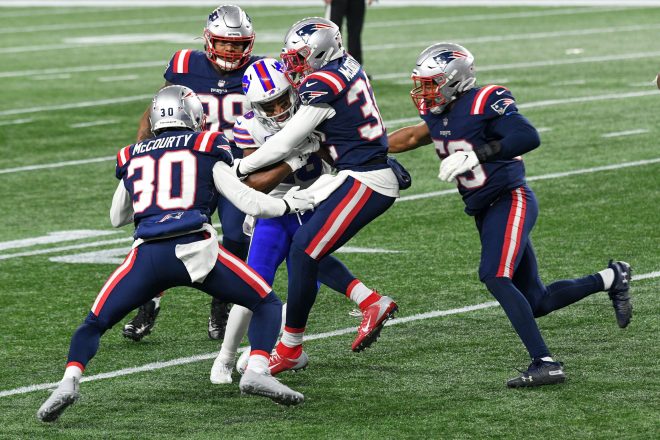 Just one week after announcing his retirement from the NFL, former Patriots cornerback Jason McCourty is starting a new career in sports media.

On Thursday, NFL Network revealed the Super Bowl Champion is joining the hosts of its “Good Morning Football” program.

“I’m fired up to join the team at NFL Network because it enables me to step out of one locker room and into another,” McCourty said in a statement.

“Being able to team up with Jamie, Peter, Kyle and Will gives me new teammates with the common goal of adding to the success of Good Morning Football. I look forward to the early mornings, great debates, laughter, and talking about the game I fell in love with. I know it will be a fun ride filled with fascinating guests and incredible segments. I will take full advantage of learning from my awesome co-hosts and production team. I’m excited to bring an inside perspective of what it’s like to be an NFL player. I’ve had the pleasure to experience it all in the NFL, from being drafted at the end of the sixth round to being cut, then traded, and finally retiring. I’ve endured seasons of 0-16 to hoisting a Lombardi Trophy in Super Bowl LIII. Good Morning Football now gives me the platform to share those experiences and lessons with fans all over the world.”

According to NFL Network, McCourty will debut on Monday, July 25, and join Peter Schrager, Kyle Brandt, Will Selva, and Jamie Erdahl on the show each week throughout the season at 7 am EST.

Damn right they chose the right twin LOL. But more importantly I’m sure everyone is fired up to attend a Beyoncé concert with young Dmac!! (Jmac) https://t.co/C3ZovPAlrB

How Was This Article?
Posted Under: Patriots Twitter
Tags: Jason McCourty Logan Ryan

By: Robert Alvarez
The Date and time for Vince Wilfork's Patriots Hall of Fame induction ceremony is announced by the team,
11 hours ago

By: Robert Alvarez
Check out the Patriots mini-documentary highlighting Richard Seymour's football journey to becoming a Hall of Fame player.
19 hours ago

By: Ian Logue
Patriots news for Monday 8/8 along with some additional team notes.
22 hours ago