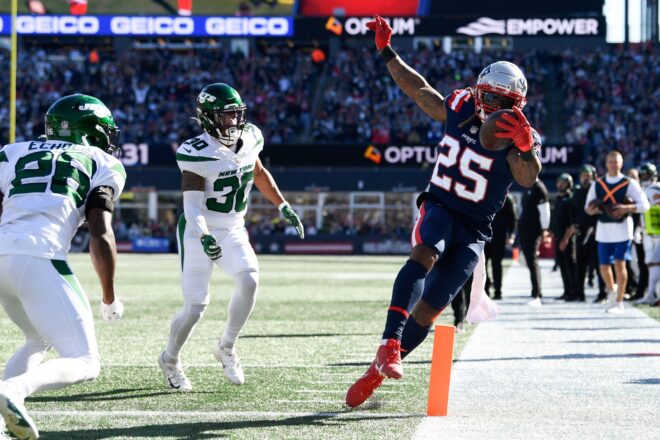 After having two weeks to prepare for the Patriots, the Jets went out and got dismantled 54-13 on Sunday in one of head coach Robert Saleh’s worst losses thus far since taking over his role with the franchise.

Sunday wasn’t easy, as it also saw the club lose starting quarterback Zach Wilson to what’s being reported as a PCL injury to his knee, which is expected to keep him out of action for the next 2-4 weeks.

Despite Mike White coming in and playing relatively well in Wilson’s absence, the club made a move on Monday to acquire Joe Flacco from the Eagles, likely hoping for a chance to remain/become competitive until Wilson returns.

Saleh spoke to the media on Monday and even despite getting embarrassed, he still feels his team is heading in the right direction.

“I’m really just focused on trying to get these guys to play their absolute best so we can show the entire Jet nation why I truly believe we’re going to win championships,” Saleh said.

“I know it’s hard to see right now, but I know the direction we’re going in and I know where it’s going to get.”

New England gave the Jets quite a beating, including scoring on each of their first six offensive possessions before they were finally forced to punt in the third quarter.

Rookie Mac Jones finished with his first 300-yard game, completing 24-of-36 for 307-yards and 2 touchdowns before letting Brian Hoyer come in for mop-up duty to finish the contest.

As for the Jets, it doesn’t get any easier.  They’re getting a visit from the Cincinnati Bengals, who are playing well and just dealt the Baltimore Ravens a brutal loss over the weekend.  From there, they head to Indianapolis on a short week for a Thursday night game, but that at least sets up another break before they get a visit by the Division-leading Buffalo Bills on November 14th.

Saleh’s statements on Monday are a stark contrast to what he said following their loss on Sunday, where he said that when it came to adversity, “this is it” and that the Jets “need to get it going.”

READ NEXT:
Pressure is Growing For the 49ers Heading into Sunday
Posted Under: NFL
Tags: New York Jets