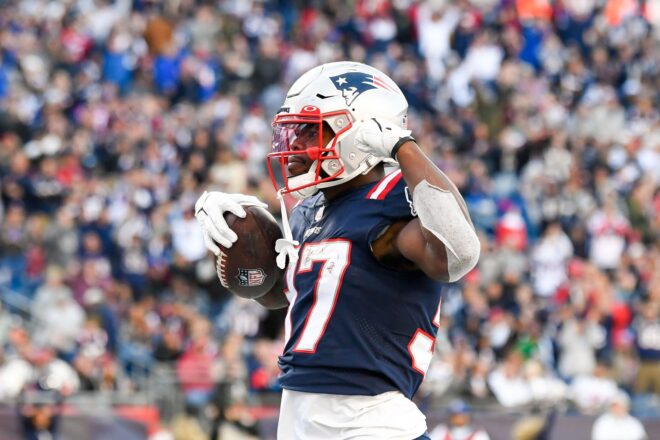 Some thoughts this morning following yesterday’s beatdown of the Jets:

1) Coming off their frustrating loss to the Cowboys, the Patriots used the Jets to get things back on track in a dominant performance as they went for over 50-points during their 54-13 victory on Sunday.

Mac Jones threw for 307-yards in the win and he was once again terrific, leading the offense to six-straight scoring drives as Jake Bailey didn’t even punt until there was just over 2-minutes left to go in the third quarter.  New England was also extremely efficient in scoring territory, with the Patriots finishing 6-of-6 in the red zone and 5-of-5 with goal-to-go.  Jones was 4-of-5 passing in the red zone, including two touchdowns.

Jones also showed us a little something in addition to his passing ability.  We saw him get a little fired up, with the rookie using his legs and showing off some pretty impressive speed as he picked up 13-yards for a first down on a 3rd-and-10 early in the second quarter.

.@MacJones_10 is HYPED after picking up the first down. #ForeverNE

Jones and the offense put up 31 points during the first two quarters and he came out and was even more efficient with the football after going 8-of-10 for 138-yards in the second half.  He eventually got to relax after finishing off a touchdown drive just two minutes into the fourth quarter, as Brian Hoyer finished things up from there.

One other interesting note, the Patriots had 19 receiving plays of 20+ yards through six games heading into yesterday’s game.  They put up nearly half that total after finishing with 10 pass plays of over 20-yards.

Coming into Sunday's game, the Patriots had 19 receiving plays of 20+ yards through six games. They had 10 yesterday against the Jets. pic.twitter.com/1nJcX5mbzS

It was a solid effort and definitely the breakout game that they needed as the rookie helped make sure the Patriots left no doubt in this one.  For a team that, while they may have other issues personnel-wise, thankfully, quarterback continues to not be one of them.

2) Despite seemingly getting banged up again against Dallas, the Patriots got another solid showing from running back Damien Harris, who came out and looked strong.

Harris had a big afternoon, putting up 106-yards on 14 carries as well as two touchdowns in what was his sixth career 100+ yard performance.  He also took off on a 32-yard run early in the game that helped set up his first rushing touchdown of the day.

His emergence in the ground game has been a major key in their success and he really has been one of the big bright spots for an offense that has obviously changed quite a bit in such a short period of time.

The former Alabama product was a name that many people didn’t think much of when they took him in the third round back in 2019, but he’s already grown quite a bit and exceeded expectations.  He’s smart, runs with power and has terrific acceleration, and he’s proving that what he did last season was just the start of what’s becoming an extremely bright future.

If this team finds itself back in contention by the end of the season or in 2022, it’s probably safe to say that we’ll be talking a lot about how much of a factor Harris will have been for them when they do eventually get there.

But the even bigger surprise has been Brandon Bolden, who continues to do an admirable job in the absence of James White.  He had another big day on Sunday after he finished the contest leading the team with 6-receptions for 79-yards including a touchdown. 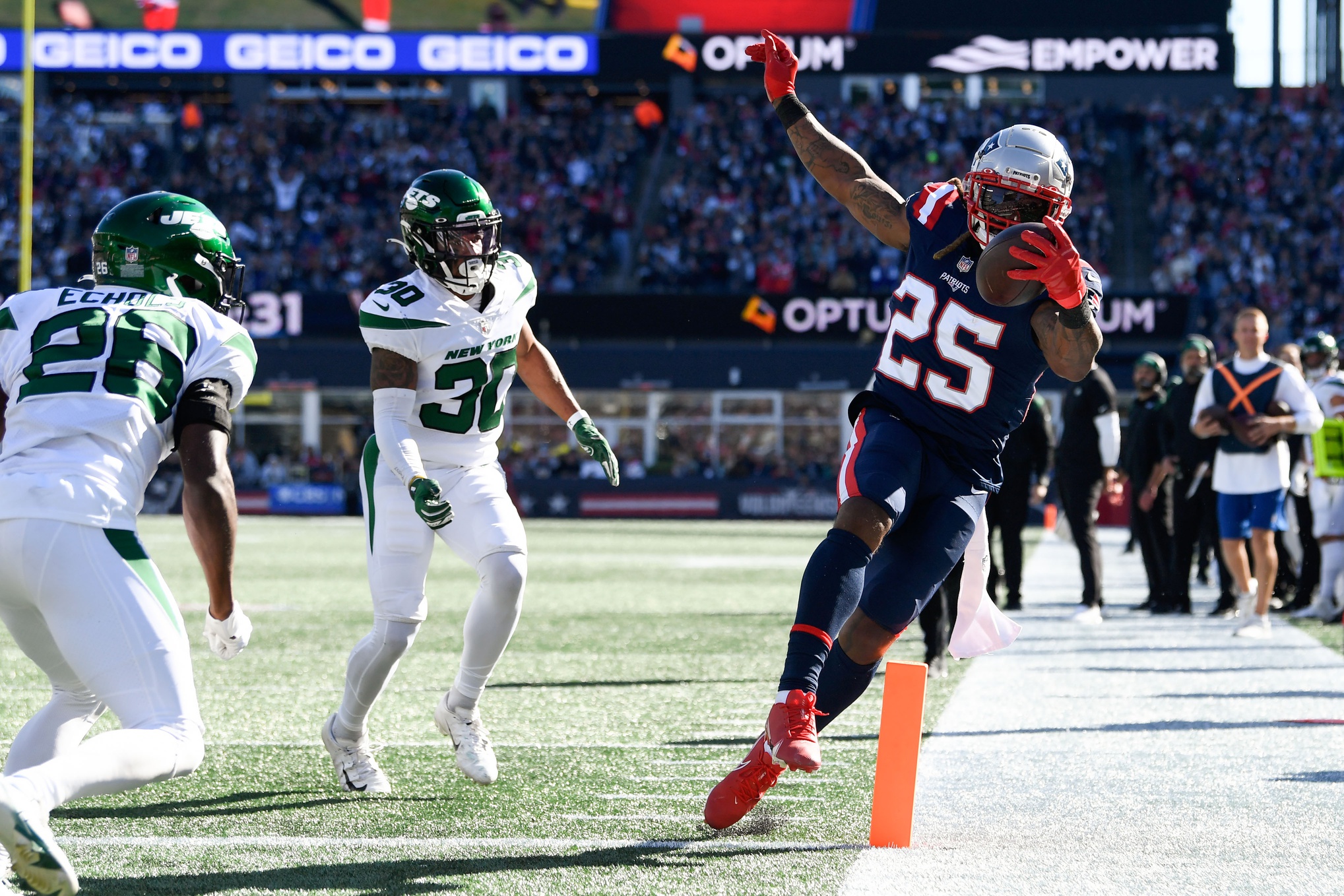 His scoring play was big because it came on the ensuing drive after the Jets had managed to get into the end zone to cut the lead to 17-7.  Instead, Jones dialed up a pass play to Bolden on a 3rd-and-7 from the Jets’ 15yd line, with Bolden taking off up the sideline before tip-toeing into the end zone for the touchdown.  That play seemed to steal the momentum back and it put New England up 24-7.

He started off a little slow but he continues getting better each week.  Depending on how the season goes, his emergence is probably going to be the most important given the void White’s injury left and it’s probably safe to say very few – myself included – expected him to make such an impact in this role.  Fortunately, so far, Bolden is doing a great job of proving otherwise.

3) Kendrick Bourne had a big day, showing off his skills early on after he was involved on a trick play where caught a backward pass from Jones and then rolled out and threw a 25-yard touchdown pass to Nelson Agholor on New England’s opening drive.

He also caught four passes for 68-yards, including a 46-yard bomb from Jones that set up New England’s final touchdown of the afternoon after J.J. Taylor ran the ball in for the score on the ensuing play.

The veteran receiver has really come on over the last few games as they’ve gotten him more involved in the offense and it was certainly a surprise to see him get an opportunity to throw the football.  Having both he and Meyers as two players with that ability only makes things more difficult on opposing defenses, which should hopefully make for some interesting moments over the remaining 10 games.

4) Meanwhile, down in New York, all is obviously not well.  Zach Wilson’s injury was a tough blow and there’s some frustration surrounding that play.

He was hit twice over the span of three plays, with the first coming on a hit by Lawrence Guy where Wilson was heading out of bounds.  Just before Wilson reached the sideline, Guy dove low and bent Wilson’s leg awkwardly.

The play looked bad when it happened, and Wilson seemed fortunate to escape unscathed from that one.  But the next one happened just two plays later wen Matt Judon hit him after the ball was gone and took him down instead of peeling off of him. 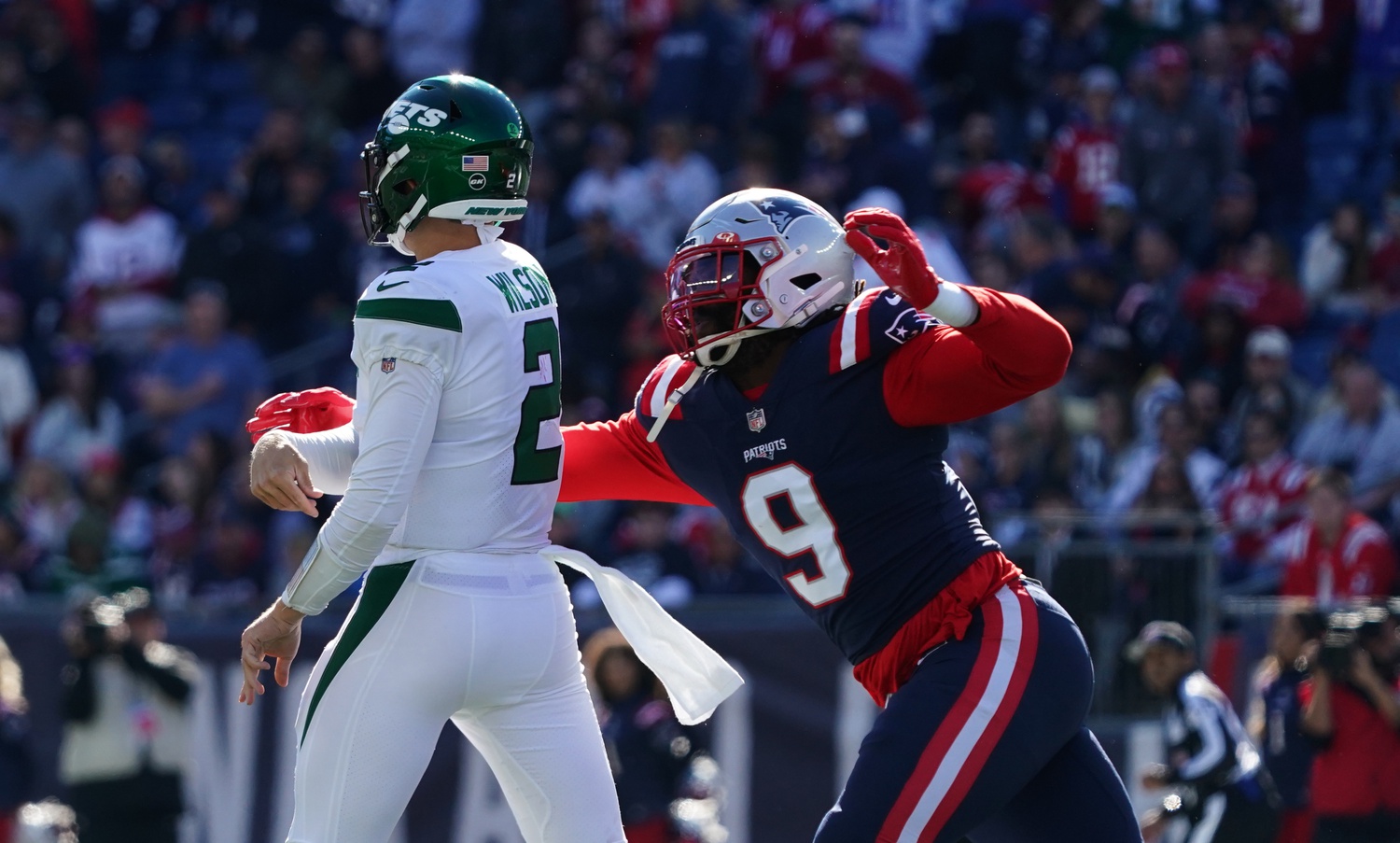 Looking at the replay, it looked like it might have been a fairly severe injury as Wilson’s leg appeared to be facing in the wrong direction.

The rookie stayed down on the turf holding his knee before walking off the field under his own power.  He went into the blue medical tent and then later walked off to the locker room and was initially listed as “Questionable” but didn’t return.

Fortunately, Wilson seems to have caught a break as the initial reports seem to indicate that he suffered a strained PCL.  He’ll still reportedly miss 2-4 weeks, but looking at the replay of the hit, it seems like it’s a miracle that it wasn’t worse.

5) One other thing that is interesting is that the New York media is coming down hard on the coaching staff, primarily because the Jets were coming off of a bye and had two weeks to prepare for this one.  While they weren’t necessarily expecting a win, they were at least expecting a more competitive contest and the fact the Jets were completely embarrassed isn’t sitting well.

Brian Costello of the New York Post noted that following this effort, there is quite an amount of concern with this coaching staff, particularly offensive coordinator Mike LaFleur, who so far appears the belief seems to be he’s “in over his head” while showing “no imagination” after the Jets haven’t been able to get the offense going all year.  That, coupled with the fact the staff had as much time to prepare as they did, are among reasons he believes should people very concerned about the future of the team going forward.

Head coach Robert Saleh took responsibility after the game but the fact that they’re showing little if any, improvement is really the bigger concern.  Now they won’t even have the luxury of potentially seeing their first-round quarterback for probably at least the next month, which only adds insult to injury for a team who appears on their way to another high first-round draft choice by the time this season is over.

Costello went on to call Sunday’s game Saleh’s “Welcome to the Jets” moment and Saleh admitted as much.

“This is the NFL, 50 points, it’s embarrassing,” said Saleh after the game.  “I don’t think I’ve had this feeling after a game since 2017 against Dallas…a helpless feeling where you’re just watching…you’re trying to figure something out.”

There has been quite a bit of discussion about Bill Belichick’s coaching decisions and efforts over the past few weeks among critics, both fans and media.  Hopefully, Sunday is a reminder that it could always be worse and for Jets fans, the 2021 season just became a little more frustrating.

Fortunately, Patriots fans will get to enjoy this one for this week before the club heads off to Los Angeles Sunday against what will likely be a tough challenge against the Chargers.

READ NEXT:
Bad News For Patriots Secondary as Jones is Lost for 2021
Posted Under: 2021 Patriots Season

By: Ian Logue
Some quick New England Patriots news and notes on this Wednesday.
18 mins ago