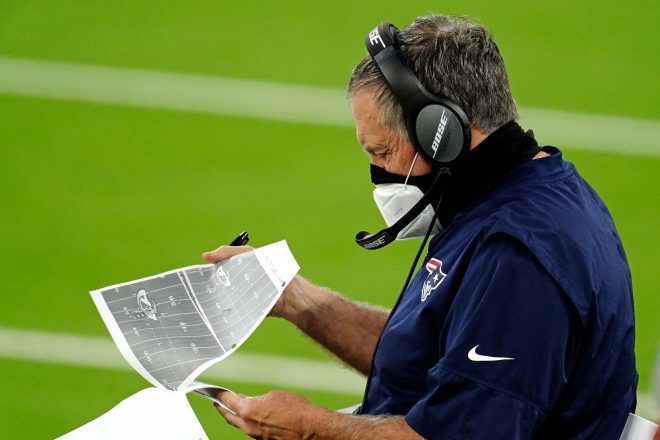 The New England Patriots looked like the team that had been on the road for a month and not the New Orleans Saints, who rode a dominant defense en route to a 28-13 win that wasn’t as close as the score indicated although it was still a one-score game with just over nine minutes to go.

The Patriots were beaten in all three phases of the game, offense, defense, and special teams. Going into this matchup the team knew they had to stop Alvin Kamara and they didn’t do it. Kamara rushed for 89 yards of 24 carries and added three catches for 29 more including a too easy 7-yard touchdown toss from Jameis Winston.

With a patchwork offensive line (3rd week in a row) and then losing a starter, you expected Jameis Winston to be under duress all game long. And yes, the Patriots did get pressure…at times, but too many times he had too long to throw. The three sacks that the Patriots did get, were products of Matthew Judon who had 2.5.

And then with just over nine minutes to go when Jones and the Patriots made it a one-score game, the defense was gashed by the Saints who bludgeoned them on the ground, eating up 6:45 of the clock. When they absolutely had to have a stop, the Saints went down the field and scored a touchdown to send the fans streaming for the Route 1 traffic. Kamara and Taysom Hill did the majority of the damage.

While Winston threw for only 128 yards, it was more by design than what the Patriots did, when they needed first downs they were getting them and the Saints were beating the zones the defense was running. Sean Payton was protecting the team away from “Bad Jameis” as he can be feast or famine. He was nearly victimized on a horrible decision at the end of the first half where he threw an ill-advised pass into the end zone that should have been picked but he was bailed out by Marquez Callaway who made a tremendous play and ripped it away for the touchdown.

After the Jenkins pick-six, Payton played very conservatively, relying on the defense until the Patriots made it a one-score game…and voila…the offense went right down the field for the game-clinching touchdown.

The Patriots’ offense looked like a car stuck in 1st gear all game long. The offensive line, which we called a Top 5 unit in the NFL, isn’t playing like it. QB Mac Jones is getting hammered out there. The protection got better in the 2nd half but they aren’t a good unit right now, and the team was able to rush for just 49 yards on 2.8 yards per rush. It is bad when the leading rusher is the immobile Mac Jones who rushed for 28 yards and had their longest run of the day for 12 yards.

Jones tossed three interceptions, the first he was hit hard as he released it and the ball was returned to the Patriots’ 9-yard line. The second was well enough of a throw by Jones who hit Jonnu Smith in the hands. Smith couldn’t hold on and the ball bounced straight up in the air for a gift pick-six for Malcolm Jenkins. His final one was picked off at the Saints 2-yard line with just a few seconds to go. Jones finished 30-51 for 270 yards with 1 TD and 3 INTs.

Smith had a particularly brutal day, he had four drops and committed a holding penalty. Smith ended up with just a single catch for four yards.

Even more damaging for the offense was that James White was carted off after running for the team’s first 1st down and landing hard on what seemed to be his hip. Later in the game facing a key 3rd and 1, the offense turned to Brandon Bolden who looked positively Laurence Maroney-esque by dancing outside and then turning his back a yard behind the line of scrimmage and backing into two tackles. Bolden carried two more times for negative yardage.

Jones tried eight times to hook up with Nelson Agholor but they were only successful twice for 14 yards.

But both Kendrick Bourne and Jakobi Meyers turned in very good performances for a rare bright spot for the offense. Meyers had 9 catches for 94 yards and Bourne had 6 catches for 96, including a 22-yard touchdown. Bourne recognized that the Saints were coming on a blitz and cut his route short. He won the jump ball and showed excellent control by staying in bounds and toe-tapping his way into the end zone.

The Special Teams units were far from their normal stellar selves. Jake Bailey had a punt blocked for the first time in his career and for the second week in a row had a kickoff sail out of bounds. They also gave up a 25-yard punt return.

There weren’t a whole lot of positives to hang their hats on after this one. The loss drops the team to 1-2 and with Tampa Bay coming into town next Sunday, and 0-5 at home.