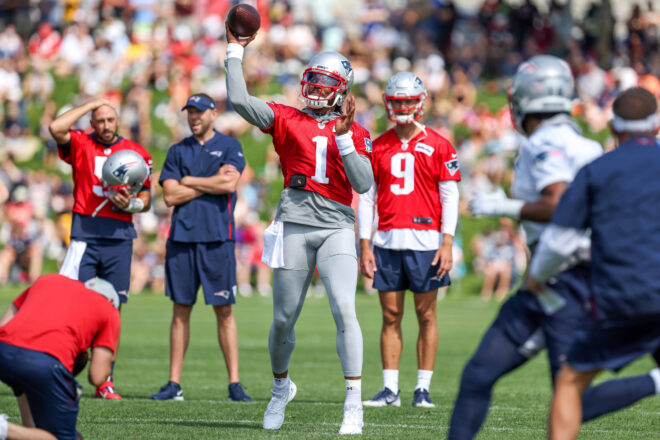 The Patriots returned to practice for day 11 of training camp back in full pads on Monday as the quarterback battle between Cam Newton and Mac Jones continued during additional 11v11 drills.

In addition to the quarterback battle, the Patriots brought in long snapper Brian Khoury to fill the absence of veteran Joe Cardona who may “potentially miss a little time,” according to Jeff Howe of The Athletic after leaving Sunday’s practice because of an undisclosed ailment.

As for other injury updates, a shoulder injury tight end Hunter Henry sustained on Sunday is not viewed as serious but could still cost him some time this month. Additionally, center David Andrews had X-rays comeback negative on his right, ball snapping hand after hurting it in the same practice.

So how did Monday’s practice play out? You can view some of the best sights and sounds shared over social media below.

Add long snapper Brian Khoury to the Patriots roster, with No. 46. This is a reflection that LS Joe Cardona (hand) will need some time to recover. Khoury is an alum of Carnegie Mellon and the XFL, and previously spent time with the Ravens. pic.twitter.com/Fu8gCzpM4q

Patriots wide receivers working on picking up the ball through traffic pic.twitter.com/n7NI8YLm4G

Our first look at Devin Asiasi. He's been making his return from the COVID-19 list. #Patriots pic.twitter.com/HyvTUMygJD

Meyers vs Jones. And that’s why he’s your WR1. pic.twitter.com/VZvEaR2xBW

#Patriots RBs working on the "my puppy saw a rabbit" drill pic.twitter.com/qymwNbwkva

Undrafted kicker Quinn Nordin, of Michigan, talks about being unsigned for four days after the draft and how he was on LinkedIn looking for jobs, and considering joining the military. Then the Patriots called. He’s been making a strong impression since. pic.twitter.com/7yZJBDtFiJ

Looks like #Patriots QB's are doing their best Peyton Manning pre-snap impersonations, all that was missing was the Omaha pic.twitter.com/kPhaX8daoQ