1 year ago at 5:00 am ET
Follow @SteveB7SFG
Posted Under: Patriots Commentary

Good morning, here is your Sunday Patriots news 7-11 (that has a familiar ring to it) this morning.

Be sure to check out our early 53-man roster projection as we’ll be adjusting it as time goes on and training camp begins.

Training Camp:  As we mentioned before, Patriots fans will be at training camp for the first time in 2 years as the NFL has opened up facilities for all 32 teams. From the Patriots website:

“The New England Patriots will conduct their first training session in front of fans in nearly two years when they open training camp on Wednesday, July 28 on the practice fields behind Gillette Stadium. The Patriots also confirmed open practices on Thursday, July 29, Friday, July 30, and Saturday, July 31.

“The team will also host an in-stadium practice on Tuesday, Aug. 10 for the general public. Other dates and times for training camp practices will be announced at a later date and posted on the training camp website.” Welcome back

Mac Jones: The Patriots’ 1st Round pick (15th overall) in this year’s draft has signed his contract earlier this week. The 22-year old signed a four-year deal worth $15.6 million fully guaranteed, with an $8.7 million dollar signing bonus.

By all indications, Jones got off to a very good start to his NFL career with a strong spring in OTAs and minicamp that impressed the Patriots’ coaches and veteran players. “He has a swag to him that I didn’t know that he had at first,” WR Kendrick Bourne said. “He’s out there confident, and that is what you need in a quarterback. Good energy, awesome guy, comes to work and you just can feel his energy and leadership already.”

Patriots long-time beat writer Mike Reiss of ESPN and not one given to throwing out any kind of hyperbole wrote that “I believe the Patriots will be sending a big thank-you note to the San Francisco 49ers for passing on Jones with the No. 3 overall draft pick,” Reiss wrote. “He slid all the way to New England at No. 15 and has made a strong first impression on coaches and players.”

Jones will be competing with Cam Newton, who still has the inside track for the starting QB position, at least to start the 2021 NFL season.

Cam Newton: Speaking of Newton, in a video that was released on Friday, Newton discussed his shoulder injury stating that after injuring it against the Chargers in 2016, it wasn’t right for several years, playing through shoulder injuries for at least three years in Carolina, often taking the field “like a wounded dog.”

The video that was recorded last September also states that he was healthy last year, but did miss time with COVID-19 and have an abdominal injury down the stretch. 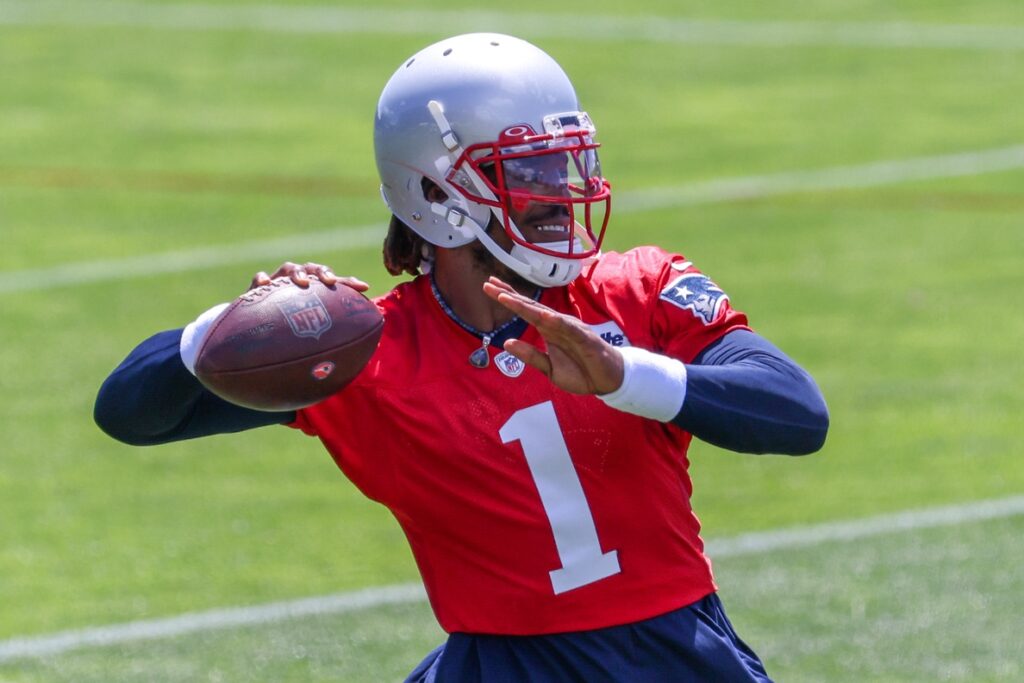 Tom Brady: The Bucs QB (I still have a hard time typing that), had a great comeback at the NHL after the Tampa Bay Lightning won the Stanley Cup, wiping out the Montreal Canadiens in five games. The official Stanley Cup Twitter account tagged Tom Brady in a tongue-in-cheek tweet that it is too heavy (34.5 lbs) to be thrown.

Brady, famously (infamously?) threw the Lombardi Trophy which weighs seven pounds from one boat to another while feeling no pain during the Bucs Super Bowl boat parade.

But Brady was having none of that. “IDK,” Brady posted on Twitter. “Everything feels a bit lighter after some tequila.” No doubt.

Cameron Kinley: Well, the Secretary of Defense, Lloyd Austin got one right. Austin released a statement that he approved a plan by the Department of the Navy to place Kinley in the Inactive Ready Reserve “for the duration of his football career.” The news comes after Kinley’s request to delay his Navy commission to play in the NFL had initially been denied.

Kinley will join the Tampa Bay Buccaneers in training camp in a few weeks. After going undrafted, the Navy cornerback and team captain, had a tryout with the Super Bowl champs and was offered a contract.

However, Acting Secretary of the Navy Thomas W. Harker declined to send Kinley’s deferment package to the secretary of defense and Kinley was told he could not appeal the decision. Thankfully Austin saw the recruitment potential if Kinley is successful and has approved his deferment until his playing career is over.

“Upon completion of his playing time, we look forward to welcoming him back inside the ranks as a naval officer,” Austin said in the statement. “In the meantime, we know Cameron will take every opportunity on and off the field to ably represent the Navy and the military to the American people and to assist us in our recruiting efforts. I applaud Navy leadership for finding this way to showcase both Cameron’s athletic prowess, as well as the quality and professionalism of our student-athletes and our personnel.”

President Biden even chimed in stating, “I am confident that Cameron will represent the Navy well in the NFL, just as he did as a standout athlete and class president at the Naval Academy,” the president said in a statement Tuesday. “After his NFL career is over, he will continue to make us proud as an officer in the United States Navy.”

4th & 2 Podcast: If you haven’t checked out our PatsFans.com podcast, “Patriots 4th & 2” in a bit, please check it out. Yes, we’ll be back in the studio soon.

The chicken or the egg… whether the struggles of WR N’Keal Harry are his alone or the way he has been utilized or underutilized is open for debate. One thing that isn’t open for debate is that through his first couple of seasons with New England, he has failed to live up to his 1st round draft slot (32nd overall).

I’ve been a huge Harry apologist in his time here, however, barring any injuries during training camp or preseason, it would be hard to justify Harry as any higher than fourth on the wide receiver depth chart behind newly acquired Nelson Agholor and Kendrick Bourne along with Jakobi Meyers. It isn’t far-fetched to believe that Harry’s 53-man roster slot is in jeopardy this summer.

So, was the request by his agent, seeking a fresh start for the WR elsewhere in a trade that so surprising? Hardly. But neither was a sign that Bill Belichick has lost control of the team that was reported on NBC Sports Boston. Nor was it an insult to Belichick. While I respect the opinion of Ted Johnson, that to me was too far-fetched.

His agent, Jamal Tooson posted: “Following numerous conversations with the Patriots, I believe it’s time for a fresh start and best for both parties if N’Keal moves on before the start of training camp. That is why I have informed the Patriots today that I am formally requesting a trade on behalf of my client.”

It was widely reported that the Patriots tried to move Harry this offseason, and now he’s trying to push the narrative. Why? There isn’t likely to be any teams beating down the Patriots door for Harry, so maybe this move will allow him to find his own home. He isn’t expected to garner any higher than a conditional 6th or a 7th round draft pick. One place that is rumored that Harry would like to go is back home to Arizona and possibly a trade to the Cardinals. That makes too much sense, but we digress.

Perhaps Harry and his agent just see the writing on the wall and don’t see the Patriots system as a fit and want a fresh start. Regardless of whether he stays or goes, for Harry to succeed in the NFL, he has to stay healthy, something he hasn’t been able to do thus far during his NFL career.

Tooson added that “for the past several months, I have been working in cooperation with the Patriots behind the scenes to put a plan in place to allow N’Keal to thrive in New England. Through two seasons, he has 86 targets, which obviously hasn’t met the expectations the Patriots and N’Keal had when they drafted a dominant downfield threat who was virtually unstoppable at the point of attack in college.”

With the offseason additions of Agholor, Bourne, as well as tight ends Jonnu Smith and Hunter Henry, it is difficult envisioning Harry having anything bigger than a niche role in the Patriots’ offense this year, barring injuries.

It probably is the best-case scenario for both parties to go for a fresh start. 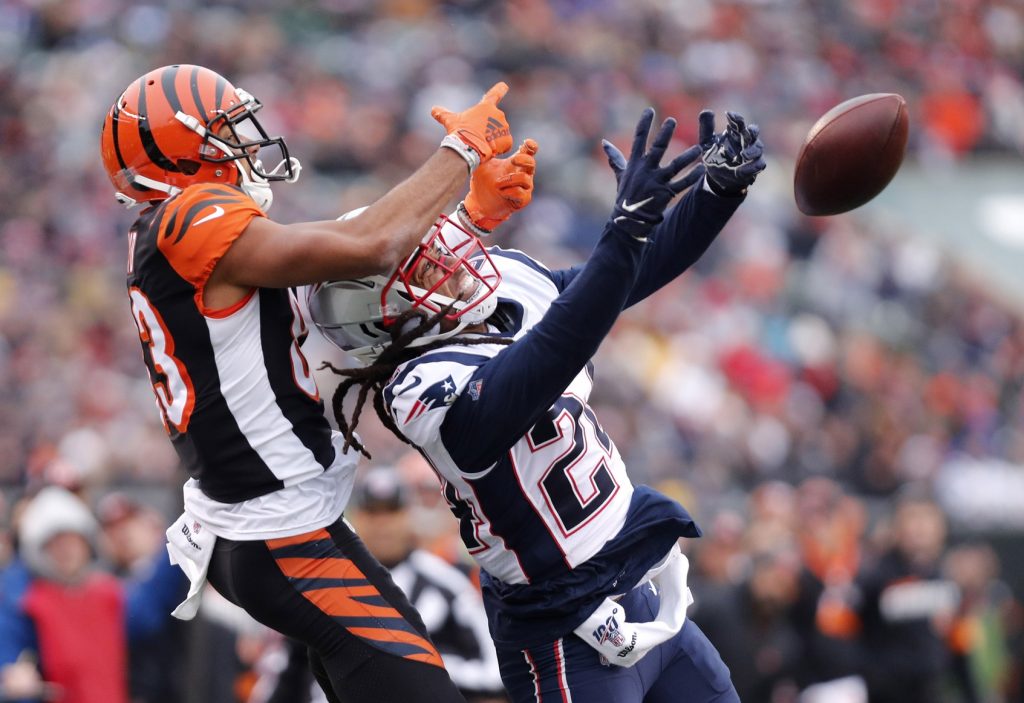 Stephon Gilmore is slated to meet with the Patriots before camp begins to discuss a new contract. David Kohl – USA TODAY Sports

The Patriots Plan on Conducting Negotiations With Gilmore Before Training Camp:

The Patriots’ defense was missing one of their biggest pieces during the recent mandatory minicamp as former NFL Defensive MVP Stephon Gilmore stayed away for both OTAs and minicamp over contract issues.

In an interview with journalist Josina Anderson, Gilmore made his feelings clear on his contract. “I just want what I’m worth, however that plays out.

“Every player should be paid what they’re worth. That’s just how it is,” he added.

Gilmore’s originally signed a five-year, $65 million contract with the Patriots that made him one of the higher-paid cornerbacks in the league at that time. But after some restructuring of his deal, the Patriots shifted $4.5 million of his remaining money to last year’s contract giving him a nice raise in 2020, leaving him $7 million in base salary this year — the final season of his deal.

Gilmore is looking for more money and would prefer an extension, but the Patriots could opt to trade him (unlikely at this point), since the Patriots didn’t make a move for a corresponding corner to replace him this spring or pay him on a one-year deal which would allow him to walk at the conclusion of the season.

“Hopefully we can find some common ground and get it situated,” he said to Anderson. “I just know what I bring to the table and my style of play. Right now I’m just trying to focus on myself and make sure I’m good mentally and physically,” adding that physically, he’s “stronger than he’s ever felt” after his quad surgery last year.

ESPN’s Jeremy Fowler on Sportscenter earlier this week, the two sides are expected to meet before training camp and try to hammer out an agreement that will please both sides.

“Things are slow right now, but I expect those sides to ramp up negotiations sometime before training camp,” Fowler said.

By: Mark Morse
This is an accumulation of observations of the last two practices.  The Joint practice was especially lively and dominated by the Patriots' Defense.
3 hours ago

By: Ian Logue
Some bad news for veteran defensive back Malcolm Butler, who saw his comeback season come to an end before it really got started.
4 hours ago

By: Robert Alvarez
The best social media sights, sounds, and notable moments from day thirteen of Patriots training camp in Foxborough with the Panthers.
16 hours ago