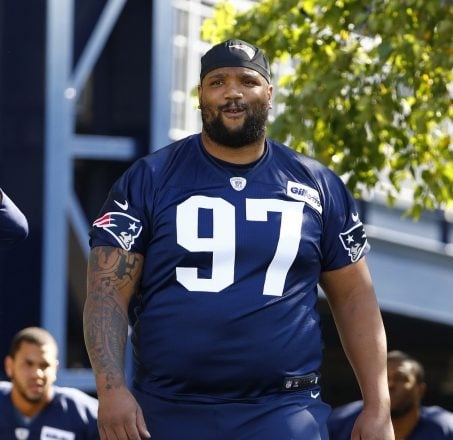 Belichick has praise for this year’s TE Group – As we know, Patriots head coach Bill Belichick puts a lot of importance on the tight end position, which is obvious given how many draft picks this team has used at that spot over the years.

With Rob Gronkowski and Martellus Bennett as the clear leaders of this group heading into 2016, Belichick has also been impressed with other players on the roster.  Clay Harbor started camp on PUP, but AJ Derby, Bear Pascoe, Steven Scheu and Bryce Williams are players who have been taking advantage of their opportunities.  There’s no question it’s one of the deepest groups that we’ve potentially ever seen, and he seems pleased with what he’s seen so far.

“Bear’s an experienced player,” said Belichick on Wednesday during his media session.  “The guy has had quite a few snaps in this league, primarily as a run-blocker, short-intermediate type of receiver, but a tough guy that’s got some length, and size and toughness in the running game. I’d say similar to a Mike Williams role. [He’s] different, but that concept.”

“I think Bryce has come in and done a good job. [He’s] got a lot to learn. It’s a big adjustment for him.  I think all three of the tight ends, including [AJ] Derby, who really had very few snaps last year, but AJ, and [Steven] Scheu and Bryce have all done a good job,” said Belichick.  “It’s been probably as good of a tight end situation, overall from top to bottom, as we’ve ever had here.”

“The guys are all competitive; they can all do enough things to be competitive. But Bryce [Williams] has done a good job catching the ball well. He’s got good ball skills, has a receiver background, but you can kind of see that watching him play. It shows up out there.”

This is an important final couple of days as the Patriots will start working against the Saints next week beginning on Tuesday.  Gronkowski and Bennett have already impressed, with the two establishing some pretty good chemistry during the early portion of camp.

However, weeks like the one coming up are a great opportunity for the guys down the depth chart to try and earn a spot on the depth chart behind New England’s top tight ends, and for now Belichick admitted that this stretch coming up will be key as they continue getting ready for the season.

“I think this is kind of an important, key time for us in terms of getting through the first few days, and getting the rust off and getting back into some contact-type practices to really start to improve our level of execution,” said Belichick.  “Hopefully we can continue to try and do that, get involved in some additional situational football, and by the end of the week be in position to compete against New Orleans when they come in here next week.”

Belichick reminds everyone, it’s not just Brady’s birthday – Tom Brady turned 39-years old on Wednesday, but he wasn’t the only one who had a birthday.

Offensive lineman Chris Barker turned 26, and his coach tried to make sure it didn’t go unnoticed.

“Well, first of all, I don’t think we want to miss Chris Barker’s birthday as long as we’re celebrating,” Belichick said when he was asked about Brady’s work ethic contributing to his longevity.

“Yeah, no question, Tom works hard. [He] works very hard at all phases of the game. I think you have to, to play as long as he has.”

That hard work continued on Wednesday, with the veteran quarterback staying on the field to put in some extra time after practice.  The early part of it involved an accuracy competition with Jimmy Garoppolo, with the remaining portion including some additional conditioning and agility work.

Brady was the last player to leave the field, and his approach remains as steady as ever, despite being suspended for the first four games of this season.

Branch returns – Defensive tackle Alan Branch returned to action on Wednesday, marking the official end of his tenure on the NFI list to start camp.

The veteran had reportedly been battling a hip issue but even during his return he appeared a little limited.  Branch didn’t take part in many drills as the team is likely taking a cautious approach in easing him back into the line-up.

But despite being limited, Branch was just glad to be back out there.

“It felt pretty good to be out there,” Branch said via the Norwich Bulletin. “Like I expected, I was pretty, not clumsy, but my feet weren’t all the way up under me. That comes with time with football because you can’t practice walking around the street, so I expected that.”

Dobson Makes Another Big Play in Practice – Aaron Dobson continues to shine, and Wednesday was another strong outing for the receiver.

Dobson had a big play during the practice session, and it came against the Patriots’ best defensive back in Malcolm Butler.

On the play, Dobson came in motion and then beat Butler on a post-corner route and made a great catch off a good throw from Jimmy Garoppolo.  Dobson’s quickness and athleticism and his big 6’3″ frame has been on display so far in camp, with the receiver not showing any ill-effects of his past injury issues and looking about as good as he has since his rookie season in 2013.

It’s going to be interesting to see how well he performs against new competition next week against New Orleans, which will allow people to get a look at how he’s able to sustain this run over the remainder of camp.

Ebner Ready For Rio – Nate Ebner has been away from the Patriots as he gets set to compete in the Olympics, with opening ceremonies set for this Friday and the competition set to begin next week.

The special teams standout has admitted that it’s been tough being away, and it’s required a lot of work on his end to get into playing shape, which is different from his football weight as he had to slim down to get to where he needed to be in order to be able to compete.

But so far, he has no regrets, and he’s glad that he’s got this opportunity.

“It was a tough decision to make, but at the end of the day, when you see a sport in the Olympics that you grew up playing your whole life, how can you not want to be part of that?” Ebner said via Yahoo.com. “It was eating me up a little bit. I just didn’t want to live with the regret of not trying. I didn’t want to have to think about what that experience would have been like if I could have made that team.”

Getting back into football shape will be the priority when the competition ends, but for now, that’s the farthest thing from his mind as he sets his sights on winning gold in Rio.

“Right now I’m all in with the U.S. rugby team, and that’s all I’m thinking about,” Ebner said. “That’s the type of person I am. I’m going to give this team everything I have.”