12 months ago at 6:00 am ET
Follow @IanLogue
Posted Under: Patriots News 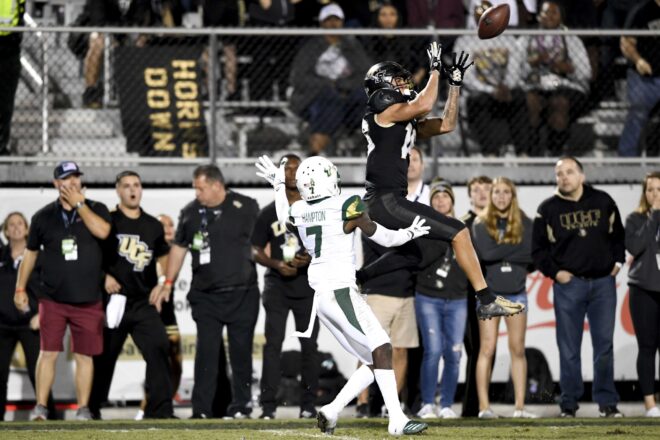 1) One of the names on New England’s roster to keep an eye on is 7th round pick Tre Nixon, whose stock appears to be rising heading into training camp.

Nixon holds the honor of being handpicked by Ernie Adams with the 242nd overall selection in the 7th round this past April, with Bill Belichick pointing out that Adams attended his final draft with the team after it ended.

The former Central Florida standout is somewhat of a sleeper, with a broken collarbone during his final collegiate season causing his draft stock to drop far enough to allow him to land right in the laps of the Patriots.

He’s got terrific speed, having put up a 4.44 40-yard dash during UCF’s Pro Day back in April and it’s obvious that he made enough of an impression with Adams to compel Belichick to make the pick.

The opportunity is certainly there.  With Julian Edelman’s retirement and multiple spots up for grabs, he’s got a chance to earn a roster spot if he can take care of business when training camp opens next month.

This is a group that’s different than past seasons.  They’ve got a nice mix of quick and speedy receivers, with Kendrick Bourne, Jakobi Meyers and Nelson Agholor as the names most Patriots fans will expect to be on the field in 2021.

However, for Nixon to stick, something will probably have to give.

The potential question might be what the future might hold for N’Keal Harry.  As it is, the former first-round pick faces some tough competition in camp and it’s going to be interesting to see if he makes the roster, or if the team decides a change of scenery might be the better move for the former Arizona State standout.  We’ve definitely heard countless trade rumors during the offseason, so for one to come into fruition wouldn’t be a surprise if that’s how it plays out.

As for Nixon, he’s already shown the willingness to put in the work, with Jeff Howe of the Athletic pointing out that Nixon spent 16 hours per day at Gillette Stadium during the offseason workouts while also spending time with Cam Newton and the other receivers. That’s always been his mindset, often spending an insane amount of time going through workouts with his brother growing up working on getting better.

His old high school is proud of what he’s accomplished and even retired his number.  Now, he’s close to realizing his dream for a future Hall of Fame head coach and a chance to be a part of restarting a dynasty.  All he has to do is prove he belongs and he certainly appears to have the right mindset.  We’ll see next month if he’s up for the challenge.

2) Edelman revealed an entertaining memory on Chris Long’s “Green Light” podcast, although, it probably wasn’t quite as funny when it happened.

According to Edelman, a skirmish between he and defensive back Stephon Gilmore in 2017 drew Belichick’s ire during a film session, with the head coach making it clear he wasn’t pleased about it.

“When I used to like fight in practice,” Edelman said via MassLive.com. “I got into a fight with (Stephon) Gilmore. He puts it on and he’ll just sit and rewind it like 45 times. With silence!”

“So he sits and rewinds it like 45 times and he stands up and says like, ‘What the f— are we doing! We can’t have this!’ Just going on and just ringing me like, ‘You know what Edelman? You’re over here thinking you’re a tough guy.’ Just getting on me in front of the team… but I think low-key he loved it.”

When that fight happened, two were ejected from that session, but it appears that Edelman took some heat for it and the message was obviously delivered.

However, Edelman and Gilmore seemed to have buried the hatchet as the former Patriots receiver posted some support of Gilmore back in 2019 with a post on Twitter:

Coming this fall, don’t miss all new episodes of “Gilmore’s Island” on Sundays, Mondays and Thursdays! Please check with your provider for local listings. 🏝 pic.twitter.com/jl9PXqbw0P

3) While many fans were hoping to see Rex Burkhead back on the field in 2021, Burkhead ended up signing a contract with the Houston Texans on Monday.

The veteran back has had to battle his way back from a knee injury he suffered last season – ironically – against the Texans.  He’s posted various updates on his progress and it sounds like he’s ready to compete for a spot.

The only challenge he faces is the fact Houston has a stable of backs that already includes sixth other players, including veteran David Johnson who played in 12 games last season with Houston and rushed for 691-yards on 147 carries as well as 6 touchdowns.  They also signed Mark Ingram and Phillip Lindsay this offseason.

But in New England, the backfield was already crowded so the fact that Burkhead moved on is an indication that he knew the chances of making the roster was pretty slim.

It would be great to see him make it back after yet another significant injury and we’ll definitely keep an eye on his progress when Houston’s camp opens up.

4) Former Steelers head coach Bill Cowher has plenty of respect for Belichick and in his new book, which is an autobiography written in collaboration with Michael Holley, Cowher left out any mention of Spygate when it comes to the Patriots.

When asked by The Athletic’s Ed Bouchette, who covered the Steelers for the Post-Gazette going all the way back to 1985, about the Patriots and the whole debacle that is Spygate, Cowher said he believed it ultimately had no effect on the outcome.

“It’s only cheating if you get caught,” said Cowher. “Like any player, if you’re going to hold him, don’t get caught. If you get caught you’re wrong, if you don’t you’re right. I always thought we never lost the games to New England because of Spygate. If he got the calls because we didn’t do a very good job of making sure we signaled those in, that’s on us, it’s not on him. Because we’re always looking for competitive edges. I think as any coach whether it’s someone’s stance, someone’s split, someone’s formation (that tips off a play). You’re looking at someone’s eyes, how are they coming out of a huddle? You’re always looking for those little things that give you a competitive edge and that to me is what that was.”

He also added that the AFC Championship losses had nothing to do with that.

One interesting note was how toxic his relationship was with then director of football operations, Tom Donahoe, who was apparently someone that had Cowher on the verge of leaving the team back in 1999.  That’s significant from a Patriots standpoint because the Steelers ultimately let Donahoe go in early 2000 and he was among people the Patriots brought in to possibly work with Dom Capers (who was interviewed for the head coaching vacancy after Pete Carroll was fired) prior to hiring Belichick.

The two impressed Kraft, but Belichick was ultimately the guy he wanted and we all know how things turned out.  Fortunately, as they say, the rest is history.

5) Peter King believes that it will be a while before Belichick’s time in New England comes to an end, especially given where they are right now.

King believes that this likely won’t be Belichick’s last season, writing that “this probably won’t be his last year, and I doubt that 2022 will be.  He’s a young 69.”

One thing that King believes will make a difference is the fact that the addition of Mac Jones sets New England up for another run.  He feels that the focus at the moment is seeing that through and when the time does come, he’ll want to have left them with a team that will compete long after he’s gone.

“That’s why Mac Jones falling to New England at 15 this year was so important to New England’s long-term future,” King noted. “It allows Belichick to feel like there’s a good chance the team now has its quarterback for the post-Brady period.”

Things feel like they’re heading in the right direction, although we’re obviously not close to finding out an answer to how things will ultimately play out.

Hopefully, we’ll see Belichick add at least one more trophy before he finally feels comfortable enough to call it quits.  That would definitely be an unbelievable story, as well as a great way to bookend what’s already been an unbelievable career.