1 year ago at 11:31 am ET
Follow @IanLogue
Posted Under: Patriots Commentary

Even fourteen years later, the term “Spygate” causes my eye to twitch whenever I hear it.

Waking up to the news on Wednesday that ESPN decided to run a piece looking back at that situation again – this time with a different twist – is irritating, especially considering that one of the key sources of the story is Shanin Specter, the son of the late Arlen Specter.  Arlen is the former Pennsylvania senator who tried to launch an investigation against the team in the aftermath of that whole debacle and it made quite a few headlines during that time.

Now all these years later, the big part of this morning’s story is the fact that Shanin claims that Donald Trump apparently intervened back in 2008 after the reports came out to help stop his father’s probe of the Patriots.

For those who remember Specter, he was the famous Senator who essentially tried to leverage an investigation against potentially stripping an anti-trust exemption against the league.  It grabbed a lot of attention, especially considering there were quite a few teams throughout the league who voiced various amounts of opinions on the accusations made against the Patriots.

Fortunately, it never went anywhere, but it doesn’t change the fact that it was part of what remains a frustrating period for those of us who followed it closely.

While Specter passed away in 2012 due to complications from non-Hodgkin lymphoma, it appears his children remain bitter and this most recent article certainly confirms that.

The story intimates that Robert Kraft, who at the time was a friend of Trump, was associated with someone who reached out to Specter and said, “If you laid off the Patriots, there’d be a lot of money in Palm Beach.”

That’s the connection raised that obviously was meant to grab attention, bringing Trump’s name back into the limelight while also trying to suggest Kraft used his relationship with Trump to help sway the former Pennsylvania senator and Philadelphia Eagles fan (who the Patriots defeated during their third Super Bowl victory in 2005), into ending his crusade against the Patriots and the NFL.

Shanin confirmed in the story that it was definitely Trump and that the offer was made at Kraft’s behest.

The article then goes on to also include a mention about the fact that “bribery of public officials” would be “a prosecutable offense”, although it does mention that the Federal statute of limitations is five years.  It’s been nearly 14.

Shanin did add that his father never reported the offer to authorities or Senate ethics officials “after he concluded that the case law stated the offer wasn’t a bribe solicitation”.

So as a result…it’s hard to understand the point of this, aside from trying to tarnish the legacies of both Kraft and the organization further. 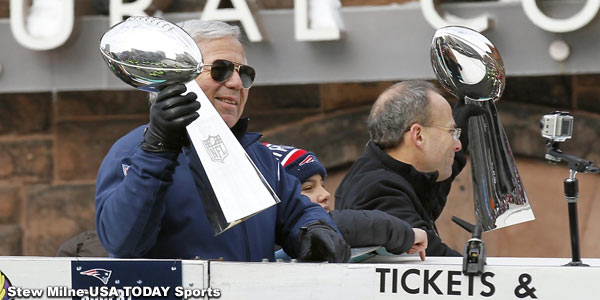 Aside from trying to tarnish Kraft and the Patriots’ legacy, this latest ESPN story makes no sense.

This piece has apparently been in the works since 2017, with it opening up and setting the scene with “an ESPN reporter” visiting the University of Pittsburgh’s Archives & Special Collections, with that unnamed reporter spending two days sifting through Specter’s letters, speeches, memos, notes and calendars, searching for evidence identifying the friend who had offered cash “if the senator would shut down his pesky Spygate inquiry.”

However, despite the digging, “the reporter” came up empty.  But they apparently didn’t need any of that supposed evidence after a recent discussion ended with Shanin’s revelation.

Both the Patriots and Trump’s team are denying the report.

What’s irritating is the fact the story opens with saying Specter, “tried to determine how many games the New England Patriots’ illegal videotaping operation of opposing coaches’ signals had helped the team win and learn why the NFL, under the orders of commissioner Roger Goodell, had destroyed all evidence of the cheating.”

It continues, “By May, Specter — a former Philadelphia district attorney and a lifelong Eagles fan — was so angry at the “stonewalling” of his inquiry by the league and the Patriots that he called for an independent investigator, similar to the Mitchell investigation of steroid use in professional baseball.”

In that opening paragraph, ESPN uses the word “cheating” as fact in that context and not as an opinion of a third party, which as you can see they put quotations around “stonewalling” in the next paragraph but not the other.

That’s infuriating, and a reminder of what a mess that entire situation remains.

This is a story that was overblown when it came out and will be wrongly reported for the remainder of time.  “Spygate” had nothing to do with any type of “cheating”.  It had to do with the fact that the Patriots were filming from a location that was prohibited by the league, taking footage from a non-permitted place that wasn’t even being used during the current game.

What’s crazy is what was simply just essentially sign-stealing wasn’t exactly invented by Bill Belichick and to take it one step further, it was even quietly a widely-known practice among coaches throughout the NFL. 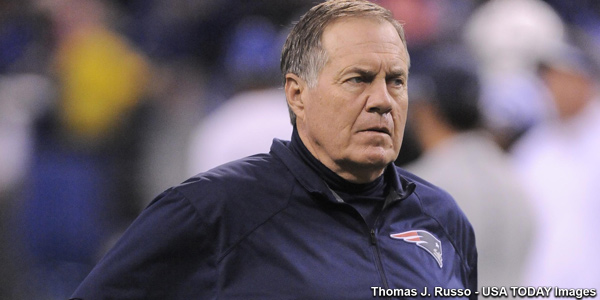 Belichick finally made his feelings on ‘Spygate’ public during the Deflategate debacle in what remains an epic press conference.

Belichick pointed this out during an epic press conference during deflategate after a reporter tried to accuse them of having ‘a history of cheating’.  He made it clear that what happened wasn’t exactly done privately and they weren’t the only ones doing it.

The reporter then didn’t let up, and neither did Belichick.

That’s likely why when the league investigated, it was wrapped up quickly and Roger Goodell had the footage he found destroyed and the case was closed.  Given Belichick’s tenure in the league and what he knows, he was probably aware of similar practices elsewhere and Goodell obviously tried to prevent all of this coming to light and potentially hurting the perception of the league.  It’s just unfortunate that Belichick and the Patriots took the brunt of it, and the false perceptions of what really happened still remain with them nearly 15-years later.

Four days after the original accusation, the league investigation ended with a $250,000 fine for the Patriots, a $500,000 fine for Belichick, and the loss of the club’s first-round pick.

But the biggest killer that to this day was the story by the Boston Herald where they reported that the club filmed the Rams walkthrough prior to the team’s first championship, with the story coming out the day before the team’s quest for a perfect season.

For anyone who remembers that weekend, that was a bombshell report that blew everything up during what should have been a much more enjoyable period given what the team had accomplished to that point.  Instead, it completely changed everything and became a massive distraction, and it remains an incredible source of frustration given what was at stake.

We’ll never know how or if it had any effect on the outcome, but the worst part was that the story turned out to be false and the Herald did ultimately retract the story three months later.  But by then, the damage was done.  The team lost and if you talk to any fans outside of New England and ask them about Spygate, the typical answer is “they filmed practices” – which stems from that false report.

Even ESPN and other networks continue getting that wrong, with the network multiple times reporting on that story as fact, only to later apologize at 1am when no one sees it.

In the end, it is what it is at this point, and the fact it even needed to be rehashed again is irritating.  Yet, unfortunately, here we are and it probably won’t be the last time, either.

Not to mention that there was no rule in the rule book then and there is no rule now banning filming the sidelines. The camera (then and now) can f.ilm anything in view. The NFL has led the public to believe since day 1 that the infraction was for filming the sidelines ( because obviously everyone would have laughed it off if they stated the infraction was having the camera in the wrong place). Essentially the Patriots were penalzed for a breaking a rule that is not in the rule book. Also not to mention that the tapes were shown… Read more »

I will forever remember when ESPN “broke” the story (by the blathering idiot Chris Mortensen, but more on that in a minute) In the studio was Bill Parcels. When asked to comment Parcels LAUGHED OUT LOUD, and said something to the effect that “So? What else is new? Everyone does it!” It should have died right then and there. But then some braniac at ESPN realized that this could be useless Mortensen’s “Pulitzer moment” and for the next several days, weeks, and months banged the drum relentlessly pathetically trying to make something out of nothing and forever exposing themselves as… Read more »