2 years ago at 5:00 am ET
Follow @IanLogue
Posted Under: 2021 Patriots Offseason 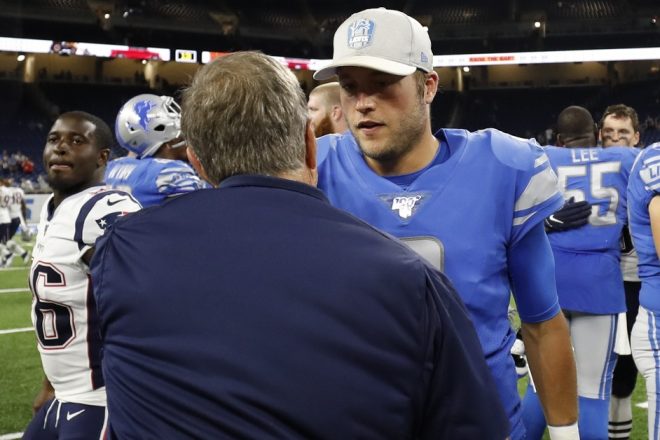 As the Patriots continue preparing for what should be an interesting offseason, one glaring issue remains.

They still need a quarterback.

The obvious place they’ll look for one will probably come at some point in the NFL Draft, but given that young players are rarely ready to start on day one, they’ll probably also sign a veteran to begin 2021.

Who that will be is now the question on everyone’s mind, especially since we’ll all have to watch Tom Brady start his 10th Super Bowl in a different uniform in two weeks.

One name that has come up recently is quarterback Matthew Stafford, who appears to be forcing the Detroit Lions to trade him after a tumultuous few seasons with Matt Patricia as head coach.

But to bring him to New England?  That’s a tough one.

Anyone who watched the Patriots this season knows the pain of watching New England come close but come up short in several outings.  If that stung, bringing in Stafford would bring quite a bit of the same misery.  He’ll make the game competitive, and he’ll get you close, but he’ll break your heart several times throughout the year. The end result will resemble that feeling most of us probably have right now watching everyone else play games in January.

In New England, the regular season had been the warm-up to playing meaningful playoff games.  With Brady departing this offseason, fans are back to learning how the other half lives, and it stinks.

Cam Newton wasn’t the answer this year, and it’s obvious the coaching staff doesn’t have confidence in Jarrett Stidham.  They obviously have even less in Brian Hoyer, especially after his lone start while Newton was sidelined with COVID-19 in Kansas City, which has the Patriots in need of shopping for someone again this offseason.

On paper, Stafford seems like a good acquisition.  He’s young, and at 32-years old, he seemingly has plenty of football left in front of him.  He’s a player who has thrown for 4000+ yards in 3 out of the last four years where he’s played in all 16 games, averaging over 20 touchdowns per season during that span.

He’s got a great arm, and his completion percentage has always been in the mid 60% range, which is also another one of his strong suits.

But man…his weakness is that he’s incredibly inconsistent, and those late losses he’s endured over the past few years have been tough.

Let’s face it, Patricia is out of work for a host of reasons, but it doesn’t help that his team came up just short far too often, and Stafford shoulders some of the blame there.

2020 was a prime example.  During what was a 5-11 season, the Lions lost four games by a touchdown or less.  Overall, looking at the totals for the season, Stafford threw just two of his 10 interceptions in the first half, with the other 8 all coming in the second half.

In his previous full season in 2018, the story was the same.  He finished the year with 11-interceptions, 8 of which came in the second half.

In 2016, he again finished with 10 picks, throwing 3 first-half interceptions but had 7 in the second half.

Having watched several of his games due to sheer curiosity during Patricia’s tenure, his second-half performances have definitely been more of a trend than they have been an anomaly.

Is that fixable?  It’s a good question.  Patricia couldn’t do it, but one would have to think Josh McDaniels might have a shot at it.  But these sorts of things tend to be difficult to correct.  If Stafford could ever pull it all together and reach his potential, it would certainly be pretty remarkable.

Unfortunately, history has shown he’s got a knack for second-half struggles, and the idea of watching that unfold again at a much higher price tag would be tough to imagine, even if the Patriots opted to make a deal to bring him here.

Fortunately, the likelihood of Stafford wanting to be around Patricia again are probably low, so it’s probably not likely.  In the end, that may be a blessing in disguise for those who aren’t fans of disappointment.

But for those who seem OK with giving up the 15th overall pick in this year’s draft for Stafford, that’s definitely too high of a price for a player who just hasn’t been able to be the guy the Lions hoped he would be.

In the end, it’s definitely risky to say the least.  Given his history and the cost, and the fact Bill Belichick absolutely hates giving the football away, it’s also a chance that doesn’t seem worth taking.  At least not if the Patriots hope to get back to competing for championships.

What are you talking about. Stafford and Drew Breeze have the most winning drives in the second half in the entire league. Stafford is excellent in late game situations. Also the reason Matt Patricia is back in New England is he was a terrible head coach. That’s not on Stafford at all.