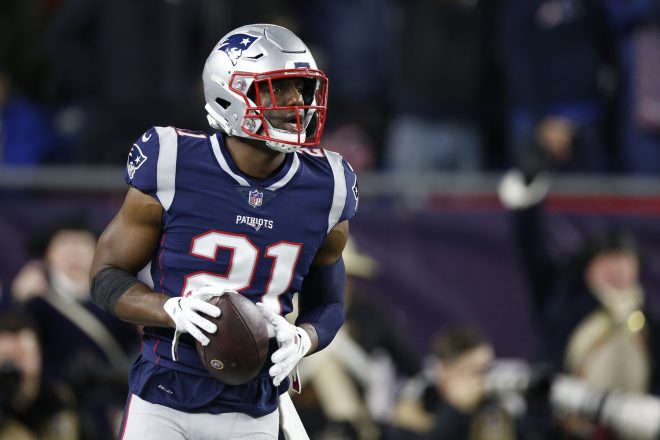 The Patriots’ training camp starts in just two days, it is one of our favorite times of the year. All 32 teams are beginning with a clean slate and are trying to build the best version of themselves as possible.

Devin McCourty, Pat Chung, and Duron Harmon are all considered starters and all three are frequently on the field at the same time. However, after those three, competition is wide open for one, possibly two, with an outside chance of three roster spots. (In our initial 53-man roster projection, we had them keeping only four safeties.)

Discussion – With the top three players returning, one can expect the position on Week 1 against the Steelers to look exactly the same as it has for a long time. McCourty, Chung, and Harmon are all locks for the roster and the only way we can see them not being on the field against Pittsburgh is because of injury.

However, both McCourty and Chung are on the wrong side of 30 and despite very solid play from both, it is time the team begins grooming their eventual replacements. McCourty flirted with retirement after the Super Bowl. It wouldn’t surprise me if he called it a career after the 2019 season. Chung is coming off of offseason surgery for his arm which was injured in the Super Bowl. Harmon is essentially a starter and should be around for the next couple of years. And that is where the team now stands.

Are there replacements for Chung and McCourty currently on the roster as it now is constructed? Time will tell. Here is where the competition proves to get fierce this summer.

The Patriots gave Brooks a two-year, $4 million dollar contract with a $500,000 signing bonus and $1.3 million guaranteed. So, because of his deal in 2019, it is really hard to see the Patriots letting go of the 27-year-old backup safety. Brooks led the Jets in special teams snaps in 2018 and he should a core mainstay on the Patriots ST units.

Melifonwu is perhaps the most intriguing member of the group. Easily the most athletic of the group, Melifonwu has tremendous size (6’4, 224) with elite athleticism. The Patriots picked him up in midseason last year and with a full offseason under his belt, he now knows the defense. It is unclear if the team views him as a deep safety who will compete with Harmon or an in-the-box safety behind Chung. With Chung missing minicamp, Melifonwu got a lot of reps with the top unit. He will bear watching in what could be a make-or-break season for him.

Every year we put Ebner on the bubble, you’d think by now, we’d have learned our lesson and recognize the fact that Bill Belichick loves what he’s got in the backup safety and special teams standout. But the fact that Brooks was brought in strictly for his special teams’ acumen, could be a omen that Ebner’s time is waning with the team. He is starting the year on PUP. But then I remember Belichick wearing Ebner’s rugby jersey at TC while Ebner was away representing the USA.

Howard had an impressive career at Appalachian State but went undrafted. He spent time with the Cardinals and Giants before the Patriots picked him up in early January. He’s a strong safety who will try to carve out a spot for himself this summer or try to land on the Patriots practice squad.

Gant is a strong safety who plays with a chip on his shoulder. He’s a thumper in the running game and offers good size (6’2, 200) for the position. Right now, he’s a long shot to make the roster but is a great candidate for the team to develop on the practice squad.  One thing to keep in mind is that with Joejuan Williams at a corner, he may be able to help cover some of the tight ends traditionally covered by the safeties.

The Patriots enter the season in very good shape at the safety position but it is time to begin developing and making plans for the eventual replacements for McCourty and Chung. There should be great competition here but again as with the cornerback position, it will take place at the back end of the depth chart.