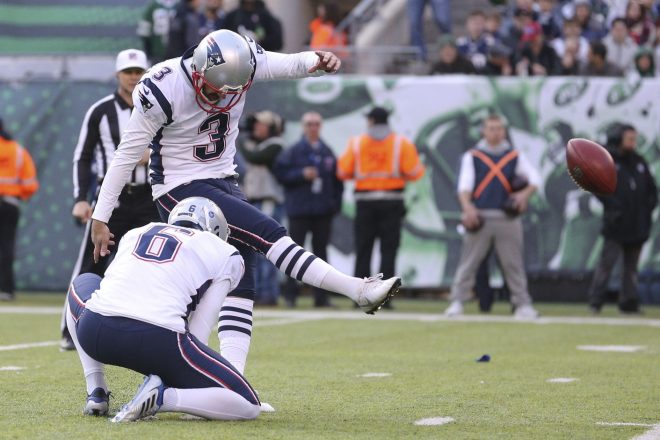 The Patriots’ 2019 training camp begins tomorrow, and it should prove to be a very interesting one once again. With approximately 65-75 percent of the roster entrenched on the top end, there should be plenty of competition for the few spots available at the back end of the 53-man roster.

As always, injuries can play a key role, as we saw the other day with the Atlanta Falcons, players can get hurt and be lost for the season really quickly. That opens the door for guys who are on the bubble to work their way on to and carve out roles.

Of course, for the past 15 years, an undrafted free agent has made his way to the Patriots’ roster. And frequently those players have not just made the team but ended up playing a significant amount of snaps.

Which brings us to the final positional group of our training camp guide, the specialists. Only one position, for now, has any competition. Kicker Stephen Gostkowski and Long Snapper Joe Cardona are unopposed in camp and those two should sleep pretty soundly this summer. The punter position will be one to watch closely as veteran Ryan Allen will be battling with rookie Jake Bailey to keep his job this year.

Discussion – With kicker and long snapper both locked on the roster as neither Gostkowski nor Cardona have any competition this summer, the focus turns to the punting game between Allen and Bailey.

Ryan Allen faced a bit of competition last year in training camp when the team brought in Corey Bojorquez last year. But the Patriots had no intention on making it a full competition and didn’t allow Bojorquez to punt in any of the preseason games in a hope to stash him on the practice squad. But he was scooped up quickly by Buffalo. Allen had an inconsistent regular season but turned it on when the games counted. In Super Bowl LIII, he was arguably the game’s MVP, where he pinned the Rams back time and again with outstanding directional punting. He outshone the Rams Johnny Hekker who is considered by many to be the best punter in the NFL.

Bailey was picked by the Patriots in the 5th round of this spring’s NFL Draft. The team actually moved up to pick him which one doesn’t normally hear about a punter. The scouting report on Bailey is that he has a tremendous leg and sails the ball very high with outstanding hang time. The only knock on him was consistency at putting the ball closer to the sidelines.

Bailey’s strong leg was on display during the Senior Bowl week and then again this spring. We watched him put some balls high into the flight pattern of Logan airport with tremendous range. But we also saw some of those inconsistencies of not getting the ball close to a sideline where the returner would have a narrow lane, an important factor in Special Teams coordinator Joe Judge’s book.

Bailey is versatile and was the primary kick off specialist for Stanford, something he could relieve Stephen Gostkowski from doing as he gets a bit older and can fill in for Gostkowski on field goals and extra points if he were to get hurt.  Versatility goes a long way on a Bill Belichick team. Bailey has a big advantage of range and hang time while Allen gets the nod on directional punting and consistency.

Bailey is also a smart kid (Stanford graduate speaks for itself), he worked for Secretary of State Condoleeza Rice, who was herself a Stanford graduate for a time and is working on getting his private pilot’s license. He’s pretty athletic, so if the Patriots ever decided to use him with a fake punt, it is something he could handle.

Bailey at this point would seem to have the edge over the incumbent veteran Allen at this stage of the game, but keep in mind there is a very long way to go. But if you make it down to training camp in the coming days, keep your eye on him.

The Patriots are in very good shape heading into the season. Gostkowski remains one of the better kickers in the NFL and is as reliable as they come. Cardona’s name is never called, which is exactly what you want out of a long-snapper. And whoever wins the punting competition should do really well. And it is safe to say, that both will be punting in the NFL this season. The only question is, which one will be punting in Foxboro?