Quarterback Tom Brady may be continuing his postseason success elsewhere these days, but the love and support from his old Patriots teammates continues on.

Over social media on Sunday, a few current and former Patriots could be seen cheering on Brady and his Tampa Bay Buccaneers during their divisional playoff game against the New Orleans Saints.

Meanwhile, running back Brandon Bolden showed off his autographed Brady Buc’s jersey along featuring a written message that said “B.B. Miss you my brother! Tom Brady 12.”

After the game, a 30-20 victory by Tampa Bay, Julian Edelman and Brandon Bolden shared congratulatory messages. 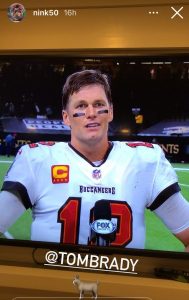 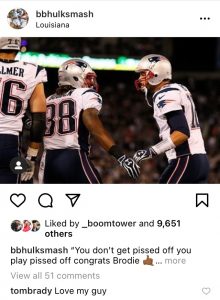 The win earned Brady a spot in his 14th conference championship game with an opportunity to earn a tenth career Super Bowl appearance.

Brady’s 14 conference championship games are twice as many as any other quarterback in NFL history and he is now up to 32 career playoff wins, giving him more playoff wins than all but five NFL franchises!

The Buccaneers will square off against Aaron Rogers and the Green Bay Packers for the NFC conference title next Sunday.