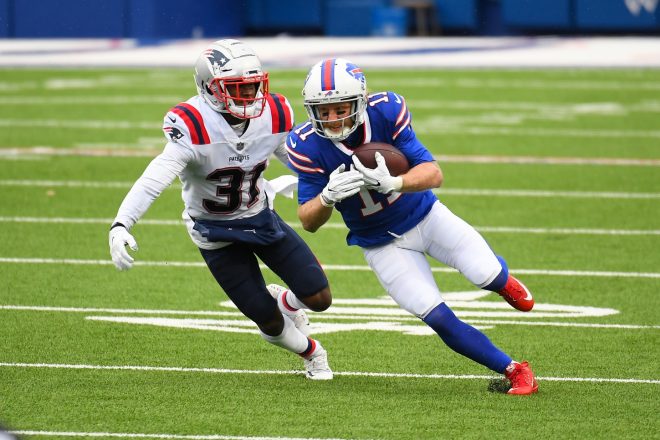 SOCIAL DISTANCING AT HOME — The Buffalo fans can stop whining now.  You finally beat the Patriots at home.

It took Buffalo being Buffalo, but in the end it came down to the Patriots being the Patriots, or rather what they are right now in the post-Brady era.  Trailing by three, but driving on the Bills’ tired defense and seemingly in position to at least tie the game and at best to take the lead, Cam Newton took off on a left end run from the Buffalo 19-yard line.  He gained six yards, but then Justin Zimmer knocked the ball from Newton and Dean Marlowe recovered with 37 seconds left.  No touchdown, no field goal, and no victory.

Buffalo held on for a 24-21 win at New Era Field on a windy and sometimes rainy Sunday afternoon in western New York.  It was Buffalo’s first win over the Patriots since 2016 and their first at home since 2011.  This has been a series dominated by the Patriots since Bill Belichick took over in 2000.  The Patriots now stand at 2-5, with their first four-game losing streak, and their worst start since that 2000 season.

It is remarkable that the Patriots were in a position to win the game, or at least tie it and send it to overtime.  Drive killing penalties, an inability to stop the Buffalo rushing attack, and a questionable decision to onside kick should have been enough to vanquish the Patriots before it got to this point.

The Bills are now 6-2 and atop the AFC East.  But the fact that they almost didn’t close out this seemingly sure win and that it came down to a lost fumble by Newton suggests that Buffalo is better but not yet ready for prime time.  This was a game that the Bills should have won going away, not letting the Patriots hang around long enough to have a legitimate shot of winning the game in the last minute.

For a time, Newton and the Patriots did find an offensive rhythm.  They scored touchdowns on consecutive possessions in the second half to get back into the game, with Newton finding Jacobi Meyers and Damien Harris topping the 100-yard mark rushing for the second time this year.  But the defense allowed Buffalo to score on three of its first four second half possessions, largely thanks to a punishing run game that nearly topped 200 yards total as a team.

A very interesting stat is that Newton finished with a better passer rating than Josh Allen of the Bills.  Newton was 15 of 25 passing for 174 yards and an 81.1 rating, while Allen was 11 of 18 for 154 yards, one interception and a 65.5 rating.  All three Buffalo touchdowns were rushing touchdowns, and Allen had one of them, a two-yard run on a quarterback draw early in the fourth quarter.

Newton hung in there for the entire game, and led the Patriots well in the fourth quarter when the Buffalo defense began to tire.  Newton was the second leading rusher in the game for the Patriots with 54 yards on six carries.  He found Meyers six times for 58 yards, and has more or less become his favorite target, something everyone thought Julian Edelman or N’Keal Harry should have been.

Harris had another solid game, mostly in the fourth quarter.  He finished with 102 yards on 16 carries.  Both Harris and Newton averaged six or more yards per carry.  The Patriots finished with 188 total team rushing yards, only two less than the Bills.

The numbers don’t look all that bad at first glance for the Patriots.  So basically, here is how they lost.

First half offensive possessions were killed by penalties.  The first drive was thwarted by a delay of game penalty, something you would never see under previous quarterbacks.  The second drive was hampered by a holding call on Joe Thuney, but kept alive by a hands to the face penalty on Ed Oliver.  That drive ended thanks to a sack of Newton by Quinton Jefferson.  Into the second quarter, the next drive was hampered by a false start on Meyers, but Nick Folk did kick a 43-yard field goal.

Then came the onside kick in the third quarter.  The Patriots had just tied up the game, on a 22-yard run by Harris and a two-point pass from Newton to Meyers.  To everyone’s surprise, Jake Bailey executed an onside kick that did bounce like you want it to.  But it bounced right to Tyler Matakevich at the Patriot 45, and Allen scored ten plays later on his draw to give Buffalo the lead back.  Those kind of onside kicks make a coach look like a genius if they work, and foolish if they don’t.  Belichick perhaps lost confidence in his defense, but the kick turned out to be a game-losing decision.

The Patriots have to do something about their run defense.  The Patriots are exhibiting poor tackling, and opposing offensive lines are opening up holes you usually don’t see.  Granted, the Patriots would love to have Dont’a Hightower, Patrick Chung and Kyle Dugger in there to help stop the run.  But the first two opted out of the season and Dugger remains injured.  Those out there aren’t playing stout enough to offset the losses, to say nothing of free agent defections.

The Patriots can once again take pride in that they fought well and should have at least tied the game in the end.  But the NFL is a results-based league, and moral victories plus a quarter will buy you a cup of coffee.  The Patriots used to know how to win, now that appears to be something they have to re-learn how to do.

The woebegone and winless Jets are next up.  The Patriots need to make a statement here that they are the superior team and beat up on them.  Pity the Patriots and their nation if the game turns out close, or if, God forbid, they lose again.  The Jets are making a top draft pick run, so it’s not likely the Jets will be out for pride like the Bills.  But the Patriots will look real bad if they win close without dominating a hideous Jet team.

This may just be one of those years where the Patriots are good enough to play but not good enough to win.  It will be someone else’s year.  As long as Belichick hangs around, the Patriots have a chance.  But the Patriots might need to set different goals for the remainder of the season, and just accept the fact that the rest of the league has caught the Patriots, and some have passed them.

But this loss still stings.  In the end, it’s all about protecting the football.  Almost winning is still losing.

READ NEXT:
5 Thoughts on the Patriots Loss to the Bills – Belichick Has a Reason to Be Optimistic
Posted Under: 2020 Patriots Season