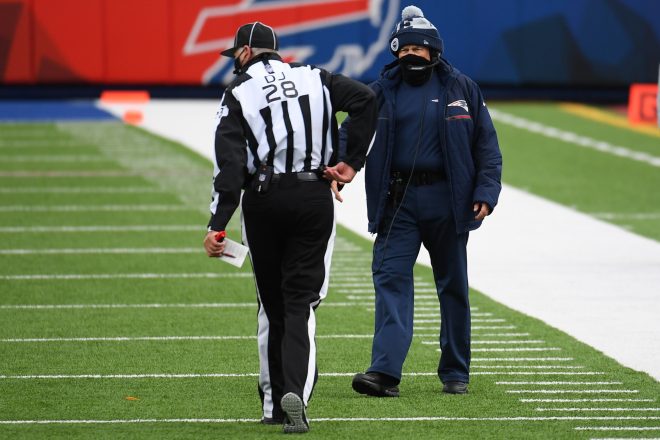 Here are some thoughts following another frustrating loss for the Patriots out in Buffalo:

1) Sunday’s loss again falls squarely on Cam Newton and the offense, with Newton’s critical turnover at the end of the game obviously being the mistake that led to their 4th straight loss.

The fact they’ve dropped four in a row is staggering, especially given the high standard of success that’s been kept here in New England and it’s certainly frustrating to say the least. Given what had transpired in prior games heading into Sunday’s match-up in Buffalo, one of the biggest points of emphasis has been on being smart with the football and avoiding turnovers. They had managed to do that for the entire game leading up to that final drive and that’s why they were even still in this one. But while they didn’t turn it over prior to Newton’s gaffe, there were still mistakes that cost them.

There were several points in the game where penalties caused them problems, several of which took them out of manageable situations and instead put them in a hole they couldn’t dig themselves out of. Some of them were inexcusable, including the first drive of the game where the offense managed to get to midfield but Newton lost track of the play clock and ended up with a delay of game penalty. Instead of 1st-and-10 at the Bills 48yd line, it pushed them back to 1st-and-15 and they were punting four plays later.

On the next offensive series, things got off to a hot start, with Newton finding Jakobi Meyers for 16 yards, followed by another nice play for 17-yards. However, Joe Thuney was called for offensive holding which nullified the play and the Patriots would later end that drive with Newton taking a sack on a 3rd-and-8 and punting from their own 36-yard line.

They did the same thing on their next drive, with Meyers getting called for a false start, which put them in a 2nd-and-13. But it would be James White who would take off for a 28-yard gain on the next play and got them out of the jam. That put them down in Bills territory and helped set up their first field goal of the game which cut Buffalo’s lead to 7-3.

Overall, Newton was slightly better than the week before, finishing 15-of-25 (60%) for 174-yards on the afternoon. But it was the Patriots ground game that carried them in this one, with New England finishing Sunday with 188-yards rushing. Newton contributed to that total with 54-yards of his own, but he still struggled throwing the football and the team seemingly took the ball out of his hands on third down in the first half.

He actually finished the first two quarters without statistically recording a 3rd-down pass attempt, with the running backs getting the call as the team finished 0-of-4. His one pass on third down was nullified on a 3rd-and-18 where he completed a short pass to White, who turned it into a 10-yard gain, but the Bills bailed them out after defensive tackle Ed Oliver was flagged for illegal use of hands and gave New England a new set of downs.

The fact they continue to have to coddle Newton remains an issue, as the veteran has struggled to get back to where he was at the start of the season. He’s continued to say the right things and Bill Belichick stood behind him after the game and said that Newton is still this team’s starting quarterback. But with things now unraveling fast, one would have to believe time is running out for Newton to get himself together and right what is now a sinking ship. Beating the Bills would have put them in a position to possibly turn things around and get back into the mix. Instead, it’s starting to look like players may find themselves with additional free time in January that they’re definitely not accustomed to. 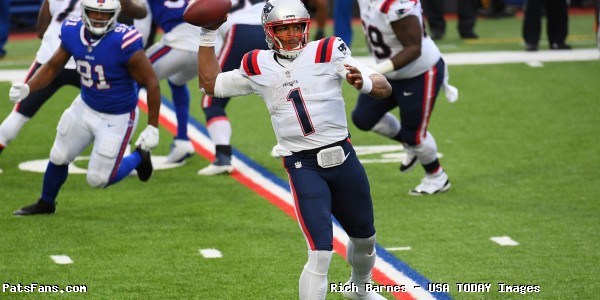 Newton is squandering a terrific season by his defense.

2) As bad as the defense struggled early in this one, they once again did more than enough to keep the Patriots in this game and put Newton and the offense in position to win at the end. That’s probably the most frustrating part about this entire situation as it’s been a good enough group where if they were able to be more productive on offense, it would have been a possibility that they could have surprised people again in the postseason.

Many fans probably remember what happened during their last run where they simply came together at the end of the year and picked the playoffs to play their best football, but there were signs leading up to that stretch that the potential was there. This is a similar group, having overcome the loss of starters thanks to the opt outs and they’ve been impressive. They’ve played tough and aside from some of their early difficulties, they once again did a good job and made plays.

J.C. Jackson came up with a big interception, picking off Josh Allen at the end of the first half when it looked like Buffalo might get points. The Bills had marched down to the Patriots 41-yard line and were on the move with the chance to potentially put the Patriots in a deeper hole heading into the second half. But Jackson picked off Allen after he misfired an attempt to Stefon Diggs, with the Patriots defensive back running it back 25-yards into Buffalo territory. That led to the Patriots adding a field goal at the end of the half to cut Buffalo’s lead to 7-6.

Overall, they did enough to keep this one within striking distance and while it was far from perfect, the fact they’ve been able to still play well given how little offensive support they’ve been getting has quietly been a bright spot. The Patriots also played Sunday’s game without Stephon Gilmore, who missed the contest with a reported injury and still managed to hold Allen to just 154-yards passing. It’s just too bad Newton and the offense has been as bad as they have because the defense has certainly done enough where their record should be much better than it is.

3) With all of that being said, those factors may be why Belichick isn’t willing to push the panic button just yet. He’s likely aware that it’s been a few plays here and there which have been the reason why they’re in this position, which is likely the message he’s sending as the team tries to pick up the pieces and get ready to play the Jets this weekend.

Looking at the overall picture, New England’s defensive performance is quietly pretty impressive, to the point where they’ve been doing enough to be among the upper echelon of teams. In fact, when you look at how well they’ve been able to take the football away, they’re the among the best in the NFL and are the only team in the group with a losing record.

That only makes New England’s 2-5 record that much more frustrating. Belichick likely knows this and the challenge now is going to be trying to keep his group together over their final nine games. He’s got one side of the football holding up their end of the deal while the other continues to struggle with a quarterback who just can’t quite seem to pull himself together. The tough part now is going to be trying to figure things out before the wheels fall of. But somewhere Belichick has to be seething after getting this type of effort from his defense and not being able to get the type of complimentary football – as he frequently talks about – from his offense.

The 0-8 and Jets are a good opportunity to turn things around and that’s likely his thought process heading into this weekend.

4) Josh Uche made his debut this weekend and it was nice to see him back out there with his former Michigan teammate, Chase Winovich. The two made some noise early in this one as Uche got his feet wet, which had initially seemed to be a good sign.

Instead, it was a limited showing but the bigger surprise was the fact that Uche actually saw more playing time than Winovich. Uche recorded 12 snaps on defense and did a pretty good job in his first outing, providing pressure and recording a quarterback hit along with one tackle. Meanwhile, Winovich saw his workload drop to just 5 defensive plays. His only tackle came on special teams.

Winovich continues to see a drop in time on the field, which is surprising considering the difference from where he started the season. He played in 42 against the Dolphins and 47 against the Seahawks. From there, it’s been a steady decline. He played in 32 in Week 3 against the Raiders, 37 against Kansas City, 22 against Denver and 13 against San Francisco. His 5 snap total is obviously his lowest of the season.

He was a high-energy guy at Michigan and he seemed like he was going to be an impact player but one would have to assume there’s a reason for his continued drop in playing time. It’s certainly curious to say the least and will remain an area to keep an eye on. But it was good to see Uche finally get on the field and he should be fun to watch moving forward. 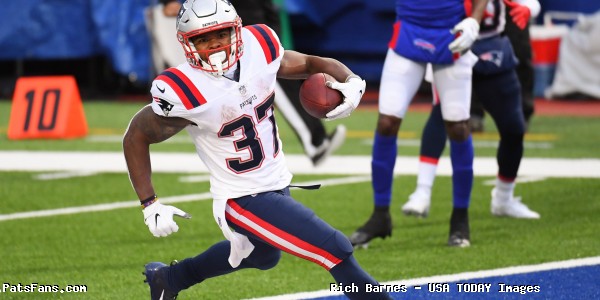 Harris has been one of the few bright spots on offense.

5) One big bright spot so far this season continues to be the growth of Damien Harris, who finished Sunday’s game with his second career 100-yard rushing performance.

Harris came up big on Sunday, finishing the day with 102-yards on 16 carries including a touchdown. He ran hard all afternoon, exploding into the hole and punishing defenders after contact. He’s a big, tough kid who has really looked solid thus far. He’s actually among the league leaders in average yards per rush, sitting at #7 with 5.7 and many of those have come after contact.

That’s been the key to the fact they’ve been able to keep themselves in so many of these games and Sunday was another great example. It’s just unfortunate that these performances haven’t translated into wins, which remains frustrating given that this team hasn’t won a football game since September.

Whether or not that will change remains to be seen. For now, the Patriots will get back to work before they take the national stage for their next contest when New England heads down to New Jersey to take on the Jets next Monday night.

READ NEXT:
Patriots Week 8 Report Card In Late Loss to the Bills
Posted Under: 2020 Patriots Season