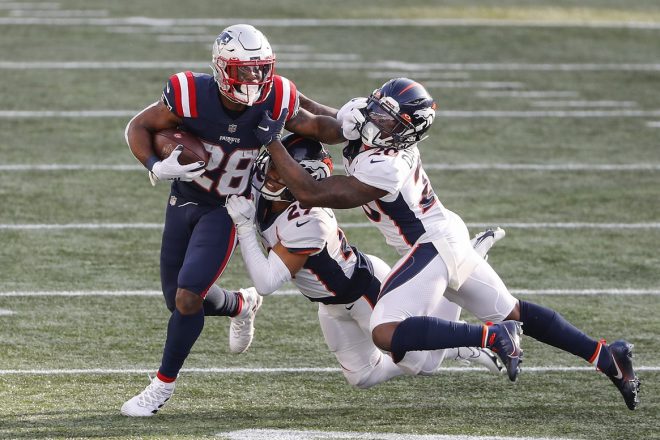 When you have two practices in as many weeks, you generally play the type of game that the Patriots showed us on Sunday. However, that isn’t an excuse, because if you saw earlier last week, the Titans had an even longer layoff and pummeled the previously unbeaten Buffalo Bills, who are a much better team than Denver.

I thought going in that Bill Belichick would have checked all the blocks and had the team raring to go. But they were very flat right from the outset. Obviously missing that much time did have an effect. Especially with the lack of offense.

So, besides our weekly rant about the late-arriving All-22, here are our grades this week for the Patriots-Broncos game. And just so there is no misunderstanding the entire team got detention this week… it was THAT ugly.

Cam Newton looked very rusty, out of rhythm, inaccurate, and held the ball far too long. Now we can point the finger at the lack of separation by the receivers (and we will below), however, on three of the four sacks suffered by Newton, he held the ball for between 3 and 4 seconds…uh-uh.

His two nicest throws were the comebacker to Isaiah Zuber that went for 16 yards and the one to Ryan Izzo where he fumbled after the catch. But he missed several throws that were there including one to Harry on their final offensive play.  Newton is quickly learning the frustration that Brady felt last year. He’s responsible for lifting up the play of those around him…and they need lifting.

However, he scrambled for 76 including a really nice 38-yard run, and caught a pass from Edelman for 16 yards… so it wasn’t all bad.

The Patriots running backs were dealing with a defense that made it their mission to stack the box and take away the run, daring them to throw. The problem was, the receivers didn’t and the backs were frequently running into tackles at or behind the line. That isn’t their fault.

However, neither White nor Burkhead was able to generate much on the ground. Damien Harris showed the ability to break tackles in both the running game and in the passing game, where he caught a check-down from Newton and turned it into a nice 14-yard gain.

James White made several nice catches and was the Patriots best receiver on the field, no surprise there with eight grabs for 65 yards.

This was a singularly awful game for the wide receivers. Denver stacked the box and said “You can’t beat us through the air” …and they were right. When your #1-2 WRs Julian Edelman and N’Keal Harry are targeted just eight times and have a combined two catches for eight yards, that is a recipe for losing football.

Damiere Byrd flashed a little speed but they don’t allow him much in the route tree department and when he does get open, the timing between him and the QBs is not there. Byrd and Harry both ran from opposite sides of the field, merging into the middle bringing the coverage with them. Luckily, Newton saw it and checked down to Harris for 14.

However, Edelman was the team’s most productive QB completing 2-2 for 38 yards as the team was forced to empty the playbook in frustration to find some passing offense.

The tight end situation is to put it mildly … a mess. And this has nothing to do with the fact that they couldn’t practice for two weeks. The team was woefully short on TE production last year. Matt LaCosse wasn’t the answer but opted out this summer. Ryan Izzo isn’t the answer either, although the coaches are sticking with him exclusively. He didn’t produce last year and still hasn’t produced this season through the first five games. He has six catches for 82 yards on the year. The guy that was washed up and they traded this spring had that much production…and a touchdown yesterday.

The coaches seem totally unwilling to even attempt a pass to one of their rookie tight ends who has played, but not much yet. Which begs the question, can it possibly be less productive than they are getting now?

With the reliance on the running game, having a reliable tight end that can block…AND catch is imperative. And right now they don’t have one.

The offensive line was once again a “catch-as-catch-can” type of day. Only Jermaine Eluemunor was starting the game in his usual position but then he got hurt. They started with Justin Herron at left tackle, Isaiah Wynn at left guard, Joe Thuney at center, Michael Onwenu at right guard, and Eluemunor at right tackle. But once Eluemunor got hurt, it forced them to bring in Hjalte Froholdt at guard and Wynn moved back to left tackle in order to let Herron play right tackle. Sounds confusing? It was.

The key to offensive line play is consistency. Playing together, getting the calls right, and finding a comfort level at their position. Having to resort to this lineup with no practice time was a total losing situation.

No, they didn’t play great yesterday…at all but considering the circumstances, it wasn’t the worst of all outcomes. Yes, Bradley Chubb dominated and two passes were batted down, but three of the four sacks were coverage sacks where the QB held the ball far too long.

The defensive line was short-handed again. Byron Cowart has COVID-19, Beau Allen is on Mars, and newly signed Carl Davis was inactive. Adding injury to insult, Adam Butler injured his elbow early on. So yes, the Broncos offensive line opened up some big holes for Phillip Lindsay early in the game. But they did a better job down the stretch with Lawrence Guy, Deatrich Wise, and practice squad player Nick Thurman did what they could muster.

They didn’t generate much inside pressure on Drew Lock which is something they need to improve upon. But they really need a dedicated nose tackle on early downs, either the guy they signed or someone else.

The Patriots linebackers had a solid day. Ja’Whaun Bentley when allowed to play that downhill, run thumping style shines and on Sunday he had two tackles for loss and a half-sack. John Simon was his usual steady, solid self coming off the edge. His sack would have forced nearly every other team out of FG range at the end of the first half. He set the edge in the running game well too.

We don’t know if Chase Winovich is dealing with something, but he wasn’t on the field for a lot more than we’re used to seeing him this year. And when he was on the field, he didn’t produce much. Adrian Phillips has done a really good job as the sub-package linebacker. Anfernee Jennings got some game action as well.

The Patriots secondary had one of those games where it was really hard to come up with a fair grade. In the red zone, they were outstanding and the Broncos were held out of the end zone, scoring on just six field goals. But six scoring drives count for something as big chunk plays were there to be had. Mike Patrick had 101 yards, including a 41-yard play early in the game.

But on the other hand, Lock’s numbers were hardly impressive as he could only muster 10-24, for 189 yards with 0 TDs and 2 INTs. J.C. Jackson and Jonathan Jones both turned in late interceptions that gave the Patriots the opportunity to turn it into a winnable game at the end.

Nick Folk hit a pair of field goals (38,41) with no misses which is a positive and Jake Bailey is so consistently excellent at pinning opponents deep, now we just take it for granted it is going to happen. But poor decisions (twice) by Gunner Olszewski put a team already struggling offensively in a deep hole

The Patriots coaching staff has had a tough couple of weeks with the positive tests, no practice time, and a revolving door at the OL/DLs. But even still, we thought they’d be better prepared to step on the field on Sunday than they were. Maybe that is being too demanding…that’s what 20 years of dominance will do.

With an offense that was clearly laboring badly, Josh McDaniels emptied out the playbook to call not one but two passes from Julian Edelman. But the inability to use (trust?) the rookie TE Asiasi is baffling.

Bill Belichick should have clearly challenged the James White tackle in the fourth quarter where he was clearly over the first down marker. That needs to come from upstairs…Why didn’t it?

We’re on to San Francisco. And practice…hopefully