2 years ago at 10:06 am ET
Follow @MarkMorse5
Posted Under: Patriots News 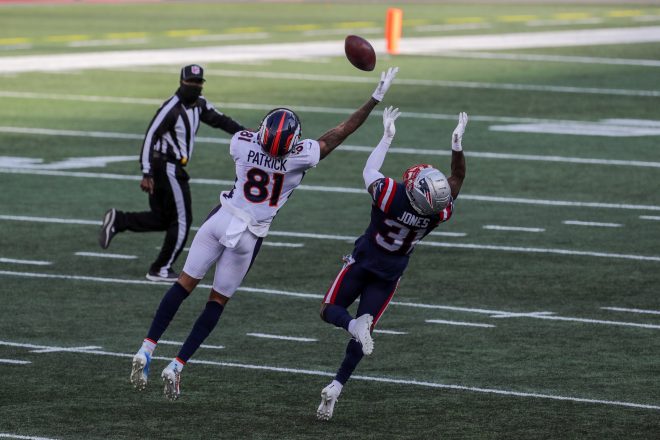 Sunday’s loss was inexcusable … there is no way the Patriots should have lost to Denver.  Yes, they only had one padded practice in two weeks and they definitely looked like it.  The offensive line was all shook up and had further disarray when Jermaine Eluemunor went down early.  Despite this they still should have beat the Broncos.  The blame sits squarely on the shoulders of Cam Newton.  He was flat out awful.

Newton’s failure to pick out secondary receivers, bad pre-snap reads, and terrible passing fundamentals led to this defeat.  He had receivers open but couldn’t find them.  Julian Edeleman wasn’t targeted once in the 1st half and only twice in the game.  Devin Asiasi was open on multiple times (and I mean wide open) and Newton just didn’t look for him.  His passes out of the backfield are downward or flat and are easily tipped or blocked which led to the 1st INT.  He has no touch on his passes.

He had Damiere Byrd 4 steps ahead of the nearest defender and Newton underthrew him.  Evan Lazar did a nice analysis of that play and correctly pointed out that Newton stepped toward the sideline with is front foot rather than pointing toward where he was throwing.  There was good protection on that play and he could have stepped up to throw.  Instead his foot went to the sideline and Newton was throwing strictly with arm strength.  Hence the underthrow on what should have been a TD.

Newton saunters to the line and takes too much time to get the play off.  The defense can get off on his cadence and get a great jump.  The Patriots need to get him under center and run no huddle, quick tempo.  The running game was stymied because the Broncos were loading the box.  It didn’t help that the offensive line were not playing their natural positions and didn’t have practice time at these positions.  How about throwing on 1st down?

Newton was horrible in reading the blitz.  He never checked off at the line of scrimmage.  I know we were spoiled by Tom Brady’s ability to pick up the blitz and torture teams that blitzed, but that hasn’t been the case with Newton. However, it doesn’t help when Newton makes a good throw to someone like tight end Ryan Izzo, only to fumble it because he was holding the ball in the wrong hand.

Julian Edelman is a shell of himself right now.  Several times it looked like he could run an arrow route and free himself, but he didn’t.  Some said that Edelman looked like he didn’t want to be there.  He is 34, has no future with the team and if he can’t contribute, he should be replaced.  Reports have it that he is playing with a knee injury.  They should sit him if it’s that bad so he can get healthy, because they’re going to need him down the stretch.  Gunner Olszewski  didn’t play a snap on offense.

The Patriots squandered a great effort by the Defense holding the Broncos to no TD’s.  Jonathan Jones was immense against speedy Jerry Jeudy.  Seven passes against Jones and only one completion.  He had a spectacular INT late in the game.

You have to give Denver credit for a great defensive game plan and kicker Brandon McManus was terrific with 6 FG’s including 2 over 50 yards.  Bill Belichick refused a 5 yard penalty which would have given Denver another 3rd down try and McManus still made the 54 yd FG with ease.

The Patriots have to do a lot of self- scouting after this game.  I would hate to be in those position meetings having to review this game film.

Jeff Howe of the Athletic talked about burying the football after the game. Put this stinker behind them and move onto the 49ers.