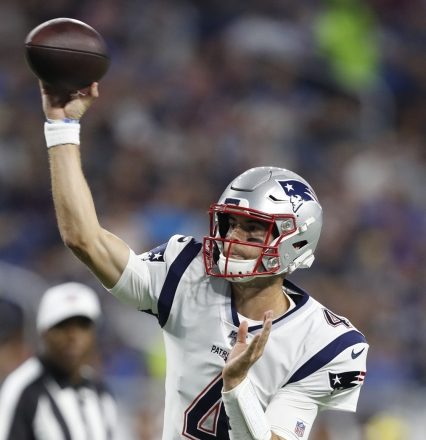 It wasn’t as clean as last week, the Titans have a lot of depth, like the Patriots and this one wasn’t nearly the blowout that the opening week was. But in the end, the younger players that the Patriots have brought in were the difference in the win. The Patriots overcame a 17-8 halftime deficit enroute to a 22-17 win over Tennessee.

With a quick turnaround and the third preseason game on Thursday night with Carolina, nearly all of the starters sat this one out. Tom Brady, was a cheerleader on the sidelines for Brian Hoyer and rookie Jarrett Stidham.

The Patriots were really sloppy on the penalty front, getting flagged 12 times, while the Titans had 10, a total of 22 accepted penalties. One of those flags cost the Patriots two points. Stidham came in for Brian Hoyer after the Titans downed a punt at the two-yard line. Lance Kendricks was called for hold in the end zone.

Other quick observations include:

Brian Hoyer- a rough night for the veteran back up. He got absolutely hammered a few times and was slow to get up. He also threw a pick on the Patriots first series.

Jarrett Stidham – He got away with a couple of early throws that could have been intercepted for pick-sixes. But he settled in and played well, completing 14 of 19 passes for 193 yards and a touchdown.

He led two long scoring drives in the second half 81 yards in 10 plays and 99 yards in 11 plays capping off the game-winning drive with a nice 23-yard touchdown pass to Damoun Patterson.

Damien Harris – We’ve been singing his praises since the NFL Draft and in his first preseason action, the rookie running back from Alabama looked very good. He rushed 14 times for 80 yards and caught five passes for 23 yards.

Harris is a patient runner who follows his blocks, makes one cut and goes. He’s tough after contact and runs with his pad level low and made the most of his opportunities.

Isaiah Wynn – Ladies and gents, there’s your left tackle. Wynn looked very solid, if not outstanding in his debut.  There has been so much speculation and worrying about his availability and the Patriots have been taking it cautiously with him. But he looked and moved really well. Big exhale, he’s fine.

Chase Winovich – The rookie from Michigan who plays like his hair is on fire, had another really solid outing. After Derek Rivers and Shalique Calhoun went down with injuries, he stepped up. He had a sack, a QB hit, two tackles for a loss and drew a holding penalty by the end of the first half. His motor and solid play is going to make him a fan favorite this season.

Jakobi Meyers – Was the best wide receiver on the Patriots side by a very, very wide margin. This kid gets better every time he hits the field. He was targeted six times and made six catches for 82 yards and a two-point conversion from Hoyer. Slow 40 time? The kid can flat out play and catch the ball.

Joejuan Williams – The rookie corner had another really solid game. He struggled early in camp but those days seem long ago and far away. Titans QBs were 0-3 when throwing at him as he had two pass breakups. He looks like he’s gaining confidence daily out there and with his size and physicality, can be a great matchup piece.

Byron Cowart – the rookie DL from Maryland set the tone early. On the second snap of the game, he undressed veteran Roger Saffold and planted Marcus Mariots for a sack. Calvin Munson and Shalique Calhoun were also active out there again.

Some things need cleaning up: The backup safeties and linebackers weren’t covering the Titans tight ends well early in this one. They cleaned it up a bit later but the coaches will have something to say on that. Obi Melifonwu seemed late to react to an inside move by Delanie Walker and was easily beat for a touchdown.

Penalties – The Patriots were getting flagged a lot especially in the first half, this will be a big issue with the coaches after they look at the film.

Injuries – Rivers and Calhoun went down, Calhoun was able to come back and play but Rivers, after being helped off the field was not seen again. That is a tough break for a kid in his third year who lost his rookie season to an ACL tear and spent last season trying to regain his form. He’s had a strong preseason and training camp.

The road portion of preseason is over, the Patriots will play the Panthers on Thursday and then the Giants at home in the preseason finale before taking on the Steelers in Gillette for the 2019 season opener.