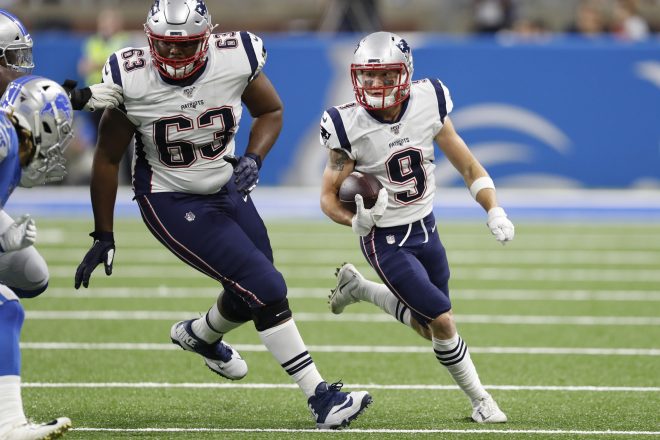 The New England Patriots looked much more prepared for the first week of preseason football than the Detroit Lions did. They were sharper, looked in better shape and appeared to be farther along in their installation than their opponents did.

While most of the starters on either team sat this one out, the final score is pretty much immaterial in these matchups. However, it was difficult not to be impressed with the production the Patriots players displayed in the Motor City as they whipped the Lions 31-3.

We wrote in our pregame piece we wanted to see the rookies in the passing game show what they can do in live game action. Jarrett Stidham, N’Keal Harry, Jakobi Meyers, Gunner Olszewski, along with 2nd-year player Braxton Berrios, as well as newcomers Maurice Harris and Matt LaCosse are all going to be counted on at some point to produce when the games matter.

And with a deep and loaded defensive unit, we wanted to see how the edge rushers and secondary men held up. It is safe to say that they passed their first test quite well.

Here are some of our observations from the Patriots first game action of 2019.

Pats QBs Brian Hoyer and rookie Jarrett Stidham played extremely well in their first game action of the year. Hoyer looked very much in control of the offense, and afforded excellent protection, he was able to go thru his progressions and deliver the ball with good accuracy in the first half.

Hoyer finished 12 of 14 for 147 yards with 2 TD passes. He was very much in command of the offense and it seemed like they could move the ball at will over the Lions’ second-team defense.

Stidham, the rookie 4th round draft pick from Auburn had a very impressive first outing. As we’ve reported from Foxboro since the spring, he throws a very nice football and really puts some spin on it. But learning a new offense for a rookie QB is a daunting task. And he went thru the typical rookie growing pains early in camp.

In Detroit, Stidham looked like a player that already has a firm grasp of the offense. He looked extremely poised and in control, went thru his progressions really well and delivered the ball on-target. While he had a couple of hiccups where he double-clutched the ball, trying not to make a mistake, it was a very impressive debut for the rookie. He completed 14-24 for 174 yards with a TD. arguably, his two best passes, deep balls to Maurice Harris were dropped but could have been flagged for pass interference. But Stidham was justifiably pleased to get his first NFL action under his belt.

“I had a great time,” said Stidham. “This is my first NFL experience, getting to play. There are a lot of things to improve on, but overall it was a lot of fun. It was a great experience.”

Jakobi Meyers has been the story of the Patriots training camp thus far, learning the offense and quickly gaining the trust of all of the quarterbacks on the roster. But we live in New England… where regardless of what has transpired, fans have been force-fed to accentuate the negative, “Well can he do it in a game?” has been a common refrain the past two weeks.  Well, his first game action was a success.

Meyers isn’t a burner, he isn’t going to wow anyone by blowing the top of the defense. His slow 40 time at the NFL Combine was the reason he went undrafted after a 92-catch season at NC State. But he has a knack for getting open and finding the seams of opponents’ defenses. And he has sticky hands and makes the difficult catches.

He had six catches for 69 yards [Gronkowski approves] and two TDs in a very impressive first effort on Thursday night in Detroit. He mentioned going against a very stout Patriots defense in practice as a positive.

“Even before this week of practice with the Lions, practicing with ourselves for two weeks — I mean, that’s a tough group of guys,” Meyers said. “You see what they did today, the show that they put on today. Going against them, I feel like I got better. I kept trying to take one step forward every day, and I feel like it prepared me for this week and today.”

N’Keal Harry had two very impressive catches before suffering a minor injury but one that kept him out for the rest of the game. Braxton Berrios and Gunner Olszewski both looked impressive in the return game, something that may win them roster spots. Maurice Harris continued his solid camp with three catches including a touchdown from Brian Hoyer.

Yes, the schemes were vanilla and the starters weren’t in there, but all you can ask for your players in this situation to do is produce….and they did. Moving on to Tennessee.

The Patriots defense was very impressive all night long holding Detroit to under 100 total yards of offense, [94], just 21 passing and allowing just a late field goal after going up by 31. Good stout run defense, excellent play in the secondary and a fearsome pass rush defanged the Lions all night long.

Derek Rivers led the way with 2 sacks, Chase Winovich, playing in front of many hometown fans chipped in with 1.5 and looked very impressive. Danny Shelton, Jamie Collins, Shalique Calhoun, Terez Hall, Ja’Whaun Bentley each had one sack while Byron Cowart chipped in with a half-sack.

The depth of the defense, something we’ve been harping on all spring and summer was on full display Thursday night.

“You saw me make the play maybe on a couple of occasions today, but really, we have so many guys up front,” Winovich said. “Sacks are very contagious. It’s a great thing anytime you can make a play and get the fans, even though we are in an opposing stadium I guess, and get your team into it. You really get into a groove feeling the game out. We are just playing great team defense I think”

Again, it is just a first step, but this was a very impressive one.

Hate to Be a Debbie Downer….But:

It wasn’t all roses on Thursday night. FIrst, on the injury front. Harry left with what appears to be a minor injury, but that will bear watching. Matt LaCosse went down in bad pain grasping his lower leg/ankle and didn’t return. Keion Crossen left with what appeared to be a concussion.

Rivers played well after he made a bad mistake in getting past the QB and allowing him to scramble for big yardage. He got an earful from Bill Belichick on the sideline after that one. But his play after that was a huge positive.

Joejuan Williams was really solid in the secondary and outstanding in the running game but then took a very stupid penalty by throwing a runner to the ground well out of bounds…he’ll hear about that in the film session tomorrow.

Overall, this performance on Thursday night capped off a productive week of joint practices and their first preseason game. It gave them plenty to build off of…we’re on to Tennessee next week.