4 years ago at 12:25 pm ET
Follow @ralvarez617
Posted Under: Uncategorized 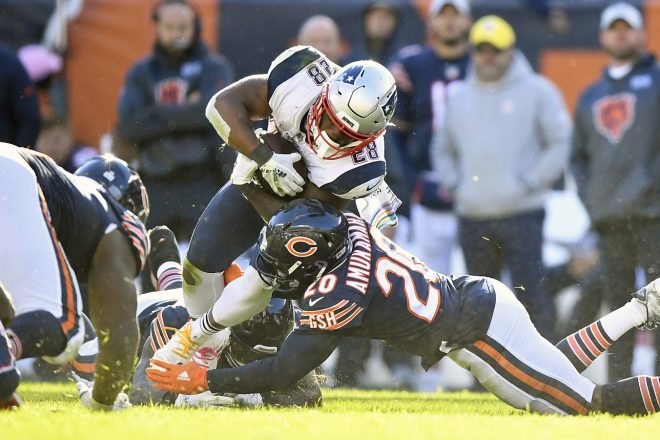 During the New England Patriots 1-2 start to 2018, the offense found itself averaging just 19 points per game and looking for answers.

After the teams embarassing ten point showing in a loss to the Detroit Lions on September 23rd, quarterback Tom Brady felt he had a solution for the teams slumping offense, get running back James white more involved.

At his postgame press conference Brady stated; “He [White] had a great catch and some great runs there at the end for us,” Brady said. “He’s just a great player for us. He’s got to be involved. Guys who can make plays, those are the ones that should be involved, and James is certainly one of them.”

Since that night in Detroit, White leads the team in targets (41), catches (31), receiving yards (255) and receiving touchdowns (four) during the four game win streak following that loss.

The Patriot offense is averaging 39.3 points per game, with all the games having 38 plus points scored, a first under head coach Bill Belichick.

Through seven games in 2018, White has already surpassed his career high in touchdown passes with six and is the first running back ever with 45 catches and six touchdowns through the first seven games.

James White has 45 receptions through seven games. Since 1999, only three running backs have had more at this point in the season – Matt Forte (52), Marshall Faulk (49) and Saquon Barkley (49) this year.

As researched by NESN’s Zack Cox, White is not only getting more involved, but at a record setting pace.

“The NFL record for receptions in a season by a running back is 102, set by Matt Forte in 2014. White is on pace to finish with 103, which would shatter his previous career high of 60. He’s also on pace for 14 receiving touchdowns, which would smash the post-merger record of nine shared by Marshall Faulk, Chuck Foreman and Leroy Hoard, and 865 receiving yards, which would be the third-most by any back since 2000 behind Charley Gardner (941 in 2002) and David Johnson (879 in 2016).”

Whites numbers are all that more impressive when factoring in the return of Julian Edelman and acquisition of Josh Gordon, neither of whom were on the field in September but active during his run.

The timing of White’s receptions have also been pivotal and clutch.

Take third down during Sunday’s game against the Bears for instance, White was a perfect four for four in receptions to go along with a touchdown.

James White was big on 3rd down for Tom Brady against Chicago: pic.twitter.com/i0gwZQwRoV

As PatsFans own Ian Logue pointed out, “White’s performance moved him ahead of Rob Gronkowski as New England’s leading 3rd down receiver, with White now sitting at 11 receptions (9 first downs) for 100-yards and 3 touchdowns on the season.”

Speaking with WEEI’s Kirk and Callahan morning show Monday, Brady praised White’s contributions in the win over the Chicago Bears.

“I know I talk about James White a lot, but you just couldn’t ask for a better player, a better teammate,” Brady said. “Someone who is as dependable and consistent as he has been for as long as he’s been here. It has just been an incredible thing for me to watch.”

“It’s hard to remember [a dropped pass]. He has incredible hands, his run after catch. Then, with Sony going down yesterday, he assumed just he normal tailback position on first and second down. He was in there on the four-minute offense running the clock out and making great runs and great decisions. It’s an incredible job he has done and he is doing. He’s really invaluable to our team.”

With the Patriots running back depth chart down to two, White is ready for the added responsbility after the loss of Sony Michel for the next few weeks.

“When guys like him go down, guys like myself and Kenjon [Barner] just have to step in and fill the void and make the most of the opportunities we get. We both run hard and try to get open in pass routes and just try to find a way to make plays.”