So sad to hear the news about former Jet RB Joe McKnight who was shot to death in a needless road rage incident this week in New Orleans. Thoughts and prayers go out to his family

Martellus Bennett Sums Up Patriots Success:
While you won’t hear many sound clips of his answer after he was asked how he equated the Patriots success, it was spot on. He made a succinct, perfect answer when asked after the Pats win over the Jets on Sunday.

There you go, it doesn’t get any simpler than that. Somebody pay the man.

“I’ve been in the league for a long time. It’s Year 9 for me. I’ve started, and me and (Gronkowski), we’re interchangeable,” Bennett said. “We do a lot of things differently, but at the end of the day, I always come in, and everyone treats me like a starter.”

“They respect me, and nothing changes in the game plan or anything if I’m in or Gronk’s out or anything like that. We just run our offense.”

Expect to see much more of the three or four wide receiver sets now, if the Pats do go two tight end formation for the running game, they have Cameron Fleming and Matt Lengel mainly as blockers.

Marcus Cannon Gets Paid:
The Patriots right tackle has been a lightning rod for criticism (including here) in the past, but in 2016 it has been a completely different story. Now healthy after battling thru foot injuries in 2015 and with Offensive Line coach Dante Scarnecchia back in the fold, Cannon has had the best season of his career. And he’s parlayed that into a big contract extension.

With Sebastian Vollmer out all season with a hip injury, Cannon has been the starter since Day 1. He’s been especially effective in the running game where he uses his 6’5, 335-pound size to great advantage. Scarnecchia has worked with Cannon on his pass protection technique which he credits to his resurgence this season.

Vollmer, a free agent in 2017 is likely done in New England. But with Cannon, the Patriots now have the right tackle position locked up for at least the next three years. He’s already come back from cancer in his senior season in college which led to his drop in the 2011NFL Draft, now he’s making a second comeback and played it into a big payday.

Former NFL PR Exec Gets Blasted by Pats:
One can imagine that there is no love lost between the Patriots front office and the NFL these days after the long-drawn out affair between the team and the league over Deflategate. So, it wasn’t a shocker when the Patriots jumped all over an insensitive tweet by former NFL PR Exec Joe Browne when he tweeted about the recent plane crash in Colombia of a football team from Brazil.

Browne, in a now-deleted tweet, was trying to complement the NFL on its forward thinking if a tragedy like this struck, but it came out all wrong. “NFL club partnership so strong that if there were tragedy similar to Brazilian soccer crash other NFL clubs would restock affected team,” Browne tweeted out on Tuesday.

The Patriots from their own Twitter account blasted Browne stating “ Poor choice of words & disrespectful to all who lost lives. Players are not stock; they’re the most important people in NFL.” 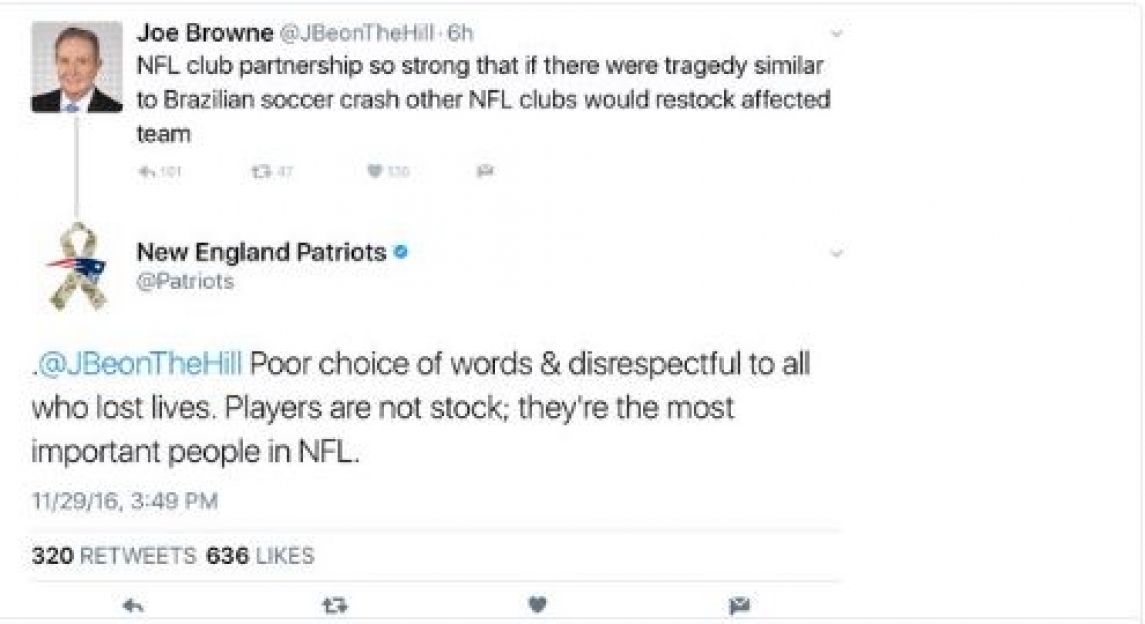 Browne deleted the tweet and apologized stating “Thought I was being informative today re: terrible Brazil soccer tragedy but the tweet was ill-timed and poorly worded. I’ve deleted it.”

If the Patriots snarky comment is surprising, it shouldn’t be. Browne was/is a long-time hater of the Pats and while Robert Kraft may play nice with Roger Goodell, there are some in the ownership group who have long memories and this was a small bit of payback.

Bledsoe Speaks to High School Football Players Tuesday:
It was great to see former Patriot great Drew Bledsoe this week. He was the featured guest speaker at the MIAA Championship Breakfast. Bledsoe reminded all of the players that just being in the state championship games is a tremendous feat in itself.

“Nobody gets to play in a state championship game by accident,” Bledsoe said. “Most of you have been working hard at this game, been working hard in the room, been putting in all of those hours and hours of blood, sweat and tears into this game. That work ethic that you have to have in order to be successful at the game of football is really, really important.”

Bledsoe then spoke about his father and the relationship he had with his athletes and how now he is coaching high school football and how important it is to building character and relationships.

Watkins Differs on What Bills OC Says About Injured Foot:
The Buffalo Bills listed WR Sammy Watkins as questionable with his recurring foot injury for Sunday’s game against the Oakland Raiders. But according to Rex Ryan, Watkins is good to go. When asked, Ryan told the media that Watkins was “gonna play” today.

Bills OC Anthony Lynn said that Watkins’ left foot is still broken despite his returning to play last Sunday. “The guy has a broken bone in his foot,” Lynn said. “I don’t know if he’s gonna play one play or 20 plays. So, we’ll just see how big his role is. I’d like to keep him in there the whole time, but I can’t say. He’s tough. He’s very determined to stay on the football field and help us win games, but he has a broken bone in his foot.”

When asked about Lynn’s comments that his foot is still broken, Watkins denied it…sort of. “Not necessarily,” Watkins said. “You hear a lot of things. Right now, my focus is the Raiders and trying to go get the win.”

Tannehill Riding Hot Hand During Fins 6-game Winning Streak:
One big reason that the Dolphins have won six games in a row is the play of the much-maligned QB Ryan Tannehill. During the six-game streak, Tannehill has tossed nine touchdowns and just one interception.

Under the tutelage of the “QB Whisperer” Adam Gates, Tannehill is having an outstanding second half of the season. Gates helped Jay Cutler to a very solid 2015 and now he’s having a similar reaction with Tannehill. He’s shown much better patience in the pocket and he’s become much more adept at moving the deep safeties with his eyes.

His comfort within Gase’s offensive system is clear and after a slow start, he and the rest of the offense have really picked up recently.

Jets Sticking With Fitzpatrick…for Now:
The New York Jets, much to the chagrin of their fan base are sticking with QB Ryan Fitzpatrick for at least one more week. Fitzpatrick threw for 269 yards and a pair of touchdowns in a 22-17 losing effort against the Patriots last week.

When pressed by the media on why he’s sticking with Fitzpatrick over Bryce Petty, coach Todd Bowles says he’s not being swayed by what happens in the future.