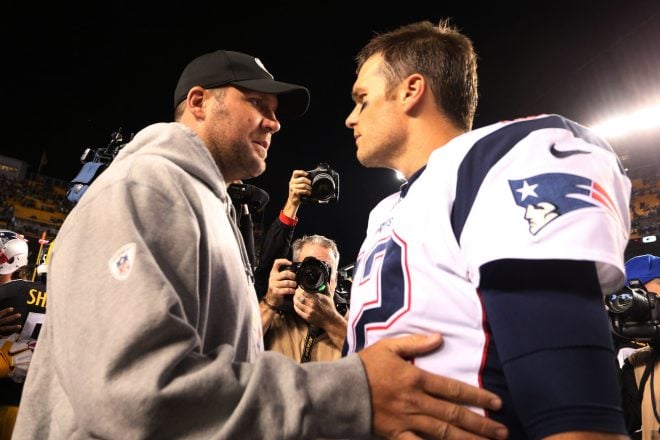 The New England Patriots entered Sunday’s contest against the AFC rival Pittsburgh Steelers with a commanding 5-1 record in what was supposed to be another chapter in Tom Brady vs Ben Roethlisberger but unfortunately Big Ben was sidelined with a torn meniscus. Enter backup Landy Jones.

When you realize Landry Jones is your starting QB against New England pic.twitter.com/sTzSoMnWZV

Before the game began, Steelers running back DeAngelo Williams posted the following video to his twitter account to troll Patriots fans, Williams himself was inactive for the game with an injury.

With the game scoreless early in the first quarter, it appeared Landry Jones had an opportunity to provide the Steelers an early lead, right up until Patriots corner Malcolm Butler did what he does best in the end zone.

Landry Jones looks for AB84 in the end zone…

Butler followed up with a little mock dance of some Antonio Brown moves.

#TB12 runs for a big #Patriots first down! #GoalLineGiving pic.twitter.com/kR1vWzzmm0

Running back James White continuing his hot streak, finding the end zone for the second week in a row helping the Patriots jump out to the early 7-0 lead.

LeGarrette Blount made his former team pay with this score giving him seven rushing touchdowns on the season, tying a career high and a 14-0 Patriots lead.

Lanrdy Jones found a way to keep the Steelers in the game, tossing this pass to Darius Heyward-Bey to cut the Patriots lead in the half.  The Patriots third down defense struggled early on.

Landry Jones to Heyward-Bey for the Touchdown!!! #Steelers https://t.co/tpbrhkjK2z

Following two Steelers field goals to cut the Patriots lead to 14-13, Tight end Rob Gronkowski unleashed on a poor secondary that struggled to cover him all night.

You might not want to let Gronk get that wide-open pic.twitter.com/GwflieLSZf

With the Patriots ahead 20-13, Stephen Gostkowski continued his rough start to the season, missing the extra point attempt.

Dating back to AFC title game, Stephen Gostkowski has missed a kick in six of his last eight games.

Need a Halloween costume idea that’ll scare the crap out of people in New England? Dress as Stephen Gostkowski.

Following another Steelers field goal, the Patriots found themselves up 20-16 with 14:49 to play in the fourth quarter and running back LeGarrette Blount sealing the game with his eighth rushing touchdown of the season, a new career high.

When she finally agrees to go on a date with you lol I love this team @LG_Blount @BB_HulkSmash @SweetFeet_White pic.twitter.com/qV1B60JGZ8

The Steelers were unable to reach the end zone the remainder of the quarter following some questionable play calls by head coach Mike Tomlin.

NO Go for it! #Steelers

Brutally bad decision by the Steelers. Down two scores and tried a 50+ yard field goal on 4th and 2 with Le'Veon Bell

So I've been sitting here now for a couple minutes trying to figure out the why of that field goal attempt by Steelers. #Patriots

When asked about the controversial missed field goal attempt after the game, Tomlin was asked if he had thought about leaving his offense on the field to go for it on 4th down.

“I did not,” said Tomlin. “He made a similar kick over a year ago right there in that same spot and the same field when we tried him out and the weather conditions were worse than they were tonight we were down there and had an opportunity to make it one-score game, I took that chance.”

The Steelers were unable to get any more scoring chances the remainder of the fourth quarter as the Patriots defense tightened up and walked out of Heinz Field 5-1 win a 27-16 victory.

You see me now! Gang tackle D! Love my dudes.