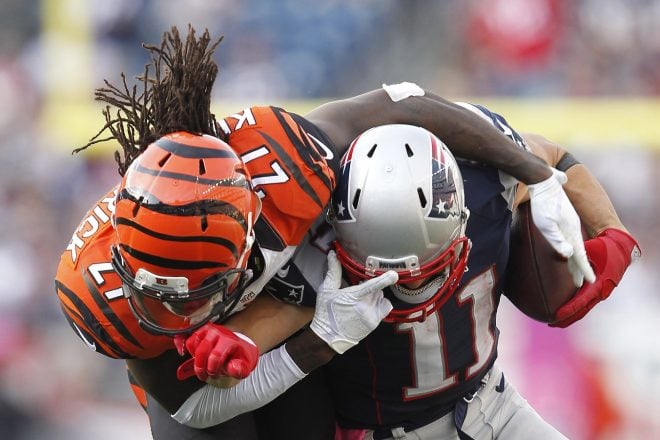 Julian Edelman has seemingly been playing with more of an edge than we’ve seen in past years, while looking very similar to the player who helped the Patriots win a championship two seasons ago.

It’s a big reason why New England sits at 5-1 heading into Sunday’s battle against the Steelers, and it’s seemingly caught the attention of the NFL, who once again decided to hit him in the wallet for a play that occurred during Sunday’s game against the Bengals.

According to ESPN’s Mike Reiss, the veteran receiver was hit with a $9,115 fine for a face mask on Cincinnati defensive back, Dre Kirkpatrick.

Patriots WR Julian Edelman was also notified of a $9,115 fine for a facemask from Sunday's victory over the Bengals.

On the play, the two were locked up (photo above) and Kirkpatrick’s hand was on Edelman’s facemask, with the receiver then grabbing his as the two went down to the ground.  Kirkpatrick was hit with the flag on the play, while Edelman wasn’t.

Consider this a make-up call by the league against a Bengals team that only netted a $75,000 fine against Vontaze Burfict, despite the fact he tried to blow out Martellus Bennett’s knees and stomp on LeGarrette Blount.  The fine was for stomping on Blount but given Burfict’s history, the fact he wasn’t suspended defies logic is mind-numbing given the NFL’s supposed stance on protecting it’s players and protecting the image of the shield.

This marks the second time this season the NFL has taken money from Edelman, with the receiver having been hit with a $23,409 penalty for hitting a defenseless player after he hit Arizona’s Deone Bucannon back in Week 1.  The league later reduced it by $9,000 upon appeal.

Patriots WR Julian Edelman had his $23,409 fine from the season-opener vs. the Cardinals (hit on Deone Bucannon) reduced by $9k on appeal.

So far through six games Edelman leads the team in receptions with 28 for 261-yards but has yet to score a touchdown in 2016.