Saints and Pats Get In Good Joint Workout Tuesday

The Patriots and Saints had a good, spirited joint practice session on Tuesday morning under hot, sunny skies at Gillette Stadium. The Patriots, however, weren’t at their best offensively and were rather sloppy with dropped passes across the board by multiple players.

Many of the Patriots coaches, including Bill Belichick, wore Nate Ebner’s rugby jersey in  a nice show of support during practice. The US National Rugby team plays its first match later tonight.

But more importantly, Julian Edelman left practice after clutching his left leg during 1-on-1 drills. He didn’t return, although the NFL Network stated that his injury “wasn’t serious”.  But he could be seen throwing his helmet in frustration. Rob Ninkovich left early with what is being characterized as a “triceps” injury. He’s slated to have an MRI tomorrow.

Not a Banner day for the offense: The Pats offense has had better days and it begins with Jimmy Garoppolo. The Pats QB suffered thru his third straight session of making poor decisions with the ball. He had some shaky moments in there, but those things are to be expected and is the reason they hold practice. 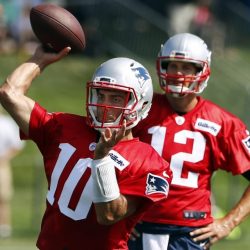 He was also victimized by a series of drops, and the Patriots receivers across the board were having issues holding onto the football.

With Solder and Vollmer out, the top offensive line consisted of LaAdrian Waddle at LT, Joe Thuney at LG, David Andrews at C, Josh Kline at RG and Marcus Cannon at RT.

After going thru warmups and a period of positional drills, the teams got together about 40 minutes into practice with the WRs and DBs going against one another.  The highlight of this segment was Julian Edelman putting an absolute filthy move on safety Vonn Bell. Edelman ran straight up the seam and faked to his right which Bell bit on and Edelman cut left leaving Bell far in his wake.

7-7: This was followed by 7-on-7 drills with the Patriots offense on one field and the Saints on the other. Once again Brady took the initial reps followed by Garoppolo. Brady’s first pass, a screen to James White over the middle was nearly picked off by linebacker Stephone Anthony. Brady hit Devin Lucien deep in the end zone. He also connected with Chris Hogan, Nate Washington, and Clay Harbor.

11-on-11s Still Sloppy: Next came the 11-on-11s. Brady’s first pass was picked off this time, by Sheldon Rankins on a screen to White. He hit on only two of his first five passes. Garoppolo came on and hit  Rob Gronkowski down the seam. Gronk was wide open but dropped the ball, one of his three drops on the day.

Brees was doing a lot of check-downs to the backs Mark Ingram, Marcus Murphy and C.J. Spiller in his early work. Asked later if that was planned Saints coach Payton said no, that the Patriots were doing a great job of disrupting routes at the line of scrimmage.

Later when Luke McCown came on for Brees, he was picked off by Duron Harmon. Not to be outdone, the Saints De’Vante Harris picked off Garoppolo during the two-minute drill. Jimmy G. was trying to hit Aaron Dobson on a crossing route and it was a pass he’d probably like to have back.

Both Brady and Garoppolo suffered what would have been a couple of sacks in the goal line sequence and the two-minute drill. For the Patriots defense, Shea McClellin, Jamie Collins, and Trey Flowers who had arguably his best practice were bringing pressure from the edge. Flowers and Dont’a Hightower each got QB pressure/sacks twice.

While the focus in the secondary was on the Cooks, Butler matchup, Cyrus Jones had a solid day. He recorded passes broken up in both individual 1-on-1 drills and during the 11s. Jones was also solid in the kick return game, fielding all of his punts cleanly and having a good return straight up the middle on one play, displaying good vision and a nice cut.

Late in practice, the third QBs, Jacoby Brissett and Garrett Grayson each got to take some extended reps with the third team offenses. The teams return to action on Wednesday morning with the scheduled start time for practice being 9:15 a.m.

By: Robert Alvarez
Patriots Chairman and CEO Robert Kraft is honored by two organizations for his charitable and humanitarian work.
3 mins ago