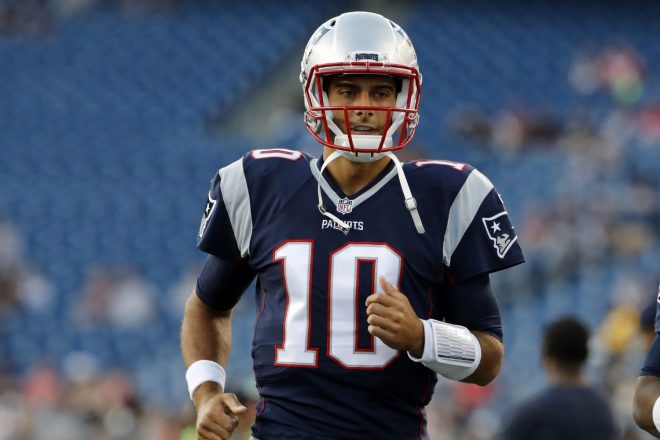 Belichick Offers Little On Brady Situation – According to CSNNE’s Tom Curran, Bill Belichick granted Tom Brady excused absences for Sunday and Monday, which comes on the heels of the Patriots quarterback suffering a thumb injury before last Thursday night’s contest where he reportedly sliced his thumb with scissors, which kept him ever taking the field during the club’s 23-22 win over Chicago at Gillette Stadium.

However, whatever reason Brady wasn’t present over the previous two days is reportedly unrelated to the injury, but Belichick wasn’t willing to comment about the quarterback’s situation when questioned by the media during his press conference on Monday.

“I don’t comment on any personal situations,” Belichick said.

Brady had been an active participant in the joint practices against both the Saints and Bears but the odds of seeing him play have likely dropped with two games to go and the fact they’re transitioning into regular-season mode. Belichick admitted Monday that they’re not quite there yet, but games like these are still important since it gives them an chance to see how well they compete against a competitive team in Carolina.   It’s an opportunity for improvement, although it’s still a different scenario than how they’ll handle things in September.

“I think this is a good opportunity for us to compete against arguably as good as any team in the league,” Belichick told the media Tuesday.  “[With] all that being said, we’re not talking about a regular season game here. We’re not talking about game planning and all of those kind of things, which I can’t imagine would happen in this game, but they’re going to happen in a couple of weeks so it’s a whole different ball game. I don’t think you can compare this game to a regular season game even though I’ve heard people try to do that.”

Either way, it’s been a long road to get to this point and Garoppolo admitted that Brady has been important to him this preseason. But the goal now is to continue trying to get better as he continues getting ready to face what should be a good challenge for him to begin the season.

“You learn so much from the guy, he’s obviously a tremendous quarterback, he’s been doing it for so long now,” said Garoppolo. “Each quarterback has a different style on how they lead, how they approach everything. Me and Tom are real similar in ways, but we’re different in ways, too. It’s one of those things where you’ve got to make it your own, you don’t want to come in and be phony and be someone you’re not, you just have to go about it as you would.”

At the time, it was hard not to wonder if the receiver’s promising beginning would end before he had a chance to get started, but the news of an elbow dislocation with no serious damage was definitely a relief for those hoping Mitchell could build on his impressive 4 reception, 55 yard performance.

The receiver is expected to need four weeks to recover, which puts his return hopefully close to the start of the regular season.  He’s been back at practice wearing a brace but has been limited, but the fact he came back so quickly is a testament to his toughness, which is certainly a positive sign.  While he’s still continuing to recover, he’s already feeling better.

“I’m feeling good, a lot better today than the day it happened,” Mitchell said via ESPN.

Mitchell, who was dragged down from behind by his jersey, joked about the fact that he “probably should have tucked my shirt in” and that while he’s disappointed about what happened, all he can do is make the best of it.

“As a competitor, sitting out in general is disappointing, but you can only control what you can control,” said Mitchell.

“There’s nothing anyone could have done to stop that from happening. It was meant to be.”

That’s just the attitude that makes him fun to root for, and hopefully we’ll see even more from him in 2016.

Brady Has Vegan Snacks For Sale – For anyone out there who might be a fan of avocado ice cream, the quarterback just made it a little easier for those of you who want to eat like a four-time Super Bowl Champion.

The only problem is, for now, they’re sold out and there’s no word yet if/when they’ll be back in stock.  This marks the second time Brady’s seen success in the food world, with the veteran quarterback having sold out a $200 nutrition manual cookbook earlier this offseason which included 89 recipes.

Patriots Release Two More Players – In addition to the news we learned yesterday about safety Cedric Thompson’s time with the team being over, the team made it official on Monday and also announced two other players who were forced to clean out their lockers and move on.

Joining Thompson was veteran tight end Bear Pascoe along with rookie free agent DB V’Angelo Bentley, giving the Patriots four open roster spots with one week to go before they’re forced to trim their roster down to 75 players on August 30th.