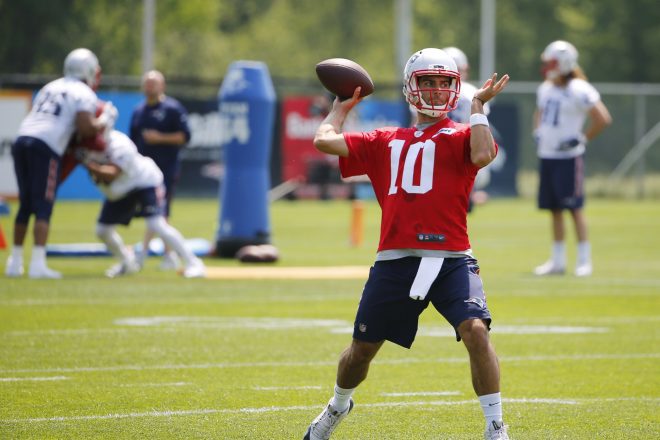 Here’s a quick rundown of this morning’s news:

Lewis Gets “Cleanup” on His Knee – According to NFL Media Insider Ian Rapoport, Patriots running back Dion Lewis will have to have a follow-up procedure on his surgically repaired knee, which is going to impact his availability to begin the regular season as he’s expected to begin the year on PUP.

Lewis originally had the surgery in November following his injury, but according to the Providence Journal’s Mark Daniels, the veteran suffered a setback in July prior to the beginning of training camp, which apparently upon further review lead to the decision.

The good news is, he could potentially be available at some point in 2016.  The bad news is, the challenge Jimmy Garoppolo faces over the first four weeks just got a little tougher since Lewis definitely won’t be out there with him to begin the season.

His injury will open up opportunities for players like James White and Tyler Gaffney, and it wouldn’t be a surprise if the Patriots also explore additional options in the coming weeks as they try and solidify a running back group that will be looking to improve off of a disappointing 2015.

Another Injury for Vollmer – Sebastian Vollmer has had a tough run and it looks like things aren’t getting any better for him to begin 2016.

According to Rapoport, Vollmer’s been dealing with a hip injury that has been the reason he’s been on PUP thus far and it’s not looking good for a return for the veteran right tackle.  Rapoport reports that Vollmer is likely to stay there throughout the season, leading to more uncertainty on the right side, which will likely put Marcus Cannon back in the spotlight again this season.  Cannon has looked better thus far and he has Dante Scarnecchia back to push him, and hopefully he’ll be able to play at a high level because it looks like he’ll probably see extended playing time this season. 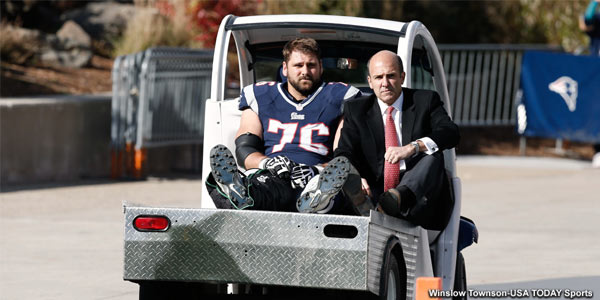 Vollmer’s had a tough run the last couple of seasons. (USA TODAY Images)


Mason suffers injury – More bad news up front after a report from the Boston Globe’s Jim McBride that guard Shaq Mason broke his hand, which is another blow to the group that dealt with quite a few injuries in 2015.  Mason’s injury obviously isn’t as significant as Vollmer’s and the odds are good we’ll probably see him at some point, but given the timing of his injury it’s reasonable to think that he may miss time to begin the year with the start of the season just about three weeks away.

Patriots Waive Safety – The Patriots had a transaction on Sunday, with NESN’s Doug Kyed pointing out a tweet from safety Cedric Thompson’s agent, David Canter, that said he’s been released.

The move puts the Patriots roster at 88 with just over a week to go before the team will need to trim down to 75 players by August 30th.  The mandatory league cutdown date when the Patriots will need to be at the 53-man limit to begin 2016 is September 3rd.

Brady Missing From Practice – According to CSNNE’s Tom Curran, Tom Brady missed practice Sunday and is not expected to practice Monday, as the veteran quarterback is reportedly away with excused absences unrelated to his injury prior to the team’s exhibition game against the Bears where he missed the contest due to a freak injury to his thumb.

That was likely a tough one for Brady, who was expected to play in the game and now won’t get the opportunity to step back onto the field in front of the home crowd at Gillette Stadium until after his return from his four game suspension, which won’t be until October 16th against the Cincinnati Bengals.

Patriots Take in a Movie Sunday Night – Bill Belichick spent Sunday night doing a little team-building, with the team taking a trip to the movies as they get set to begin preparations to face the Panthers this week.

According to ESPN’s Mike Reiss, the team took in a screening of the movie “Deepwater Horizon” Sunday night, with coaches and players spending some time away from the gridiron in what has seemingly been a pretty productive preseason thus far.

Patriots owner Robert Kraft was spotted meeting Mark Wahlberg prior to the screening, who stars in the film along with Kurt Russell, John Malkovich, Gina Rodriguez, Dylon O’Brien and Kate Hudson.

The film will hit theaters on September 30th.

Ninkovich Frustrated With Being Out – Rob Ninkovich had been a steady presence on the Patriots defense over the years, having not missed his last 102 straight regular season games, third best behind the Colts Kendall Langford (128) and the Packers Julius Peppers (128).

But he’ll miss the beginning of 2016 as he recovers from a torn triceps, and the veteran linebacker told CSNNE that it’s been hard being out, but all he can do is try to stay in shape and continue watching film as he works his way back.

“It’s really hard,” he told the website. “I haven’t had to deal with anything like this for a long time. Just trying to work as hard as I can, and just trying to work and do the only thing I know how to do. That’s try to work hard to get back.”

Ninkovich suffered the injury back on August 9th during a joint practice with the Saints but is expected to be back at some point during the 2016 season.

Garoppolo wired for success – The Chicago Tribune had a nice story on Jimmy Garoppolo, looking at the opportunity sitting in front of their local native as he gets set to take the reigns for the Patriots this season.

According to the newspaper, not only was Garoppolo excited for his chance when the news came down that Brady would be dropping his appeal and letting the NFLPA move forward without him, but so was Garoppolo’s family, who gathered with the quarterback for dinner that evening.  His brother, Tony Jr., revealed  said, “It was just smiles around the table” as they celebrated the news.

Garoppolo’s father, Tony Sr. is a union electrician who Tony Jr. said has “never worked a 40-hour week in his life,” with their father being someone who puts in a lot of overtime as he did what it took to take care of his family and that he deserves a lot of credit for the QB’s work ethic.

That hard work has clearly begun to pay off and his family now has plenty to be happy about given how Garoppolo played Thursday night. He finished 16-of-21 for 181 yards and a touchdown and looked very much in command of the offense for much of the night.

He’ll face a different test over the next two weeks as he’ll be on the road playing against a little more of a hostile crowd against both the Panthers this Friday night, followed by the Giants next Thursday, which should be interesting to see how he handles playing outside the friendly confines of Gillette Stadium.

The third game is considered to be the “dress-rehearsal” for the opener, with Garoppolo expected to be the guy who one would believe will start as he tries to build off that performance against the Panthers Friday night.  He’s grown a lot just in these past two weeks, so hopefully we’ll see this week show just how ready he is heading into week 1.