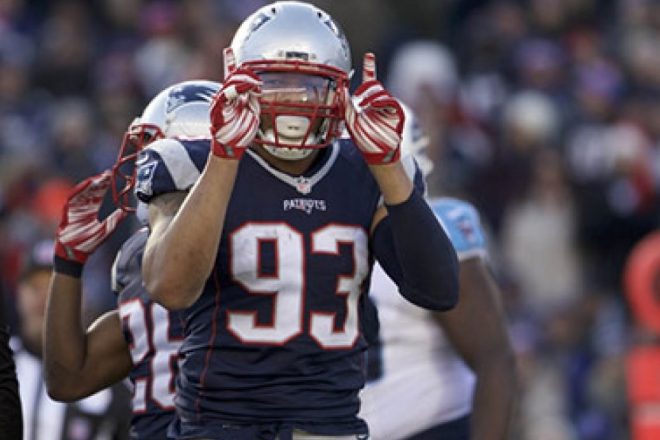 The Patriots head into training camp next week and there should be no shortage of competition at a number of spots. As a lead-in to the beginning of camp, we’ll break down the positions and give our take on who is a lock, a near lock for the 53-man roster and who is on the bubble. Next up is the Defensive Line.

So next on deck are the defensive linemen. The Patriots lost three of their linemen from a year ago. They traded Chandler Jones to Arizona, lost Akiem Hicks in free agency and released former first-round pick Dominique Easley. But the team is poised to be very good and is deep along the front four.

After years of trying to search for an undersized penetrator in the interior to beef up the pass rush, the Patriots and Belichick made a shift in their approach in 2016. The interior players that they brought in via free agency and the draft are all big men that are space eaters and run stuffers first. It is clear that the pass rush will come from the edge guys who are versatile and can slide inside on obvious passing downs.

They added Terrance Knighton, Frank Kearse and Markus Kuhn in free agency. Picking up Vincent Valentine in the draft and Woodrow Hamilton as a UDFA adds a lot of beef to the interior of the line.

On the edge, the team brought in Chris Long who has the last two seasons end in injury but is healthy in 2016 and is this season’s reclamation project. Jabaal Sheard will take Chandler Jones’ previous starting spot opposite Rob Ninkovich.

Roster Locks: Jabaal Sheard, Rob Ninkovich, Malcom Brown, Terrance Knighton, Alan Branch, Chris Long, Trey Flowers, Vincent Valentine
Sheard and Ninkovich, who played LB in the spring are the starters on the edge. They are both productive and set the edge in the running game extremely well, (something Jones’ game lacked in his time here). Long will be the dedicated pass rush specialist, something that should keep him fresh this season. He and Flowers provide the depth.

The interior will feature a mixture of Brown who in his second season is primed for a big year, Branch and Knighton. Branch has played some of his best football as a member of the Patriots and provides that veteran leadership. Valentine by virtue of his draft position is a lock. Pot Roast came over from Washington and gives the Patriots that big (6’3, 354-pounds), immovable object inside, like Vince Wilfork.

One of the things the Patriots liked to do in Big Vince’s time was to play a hybrid scheme that Knighton should fit well in. Knighton will line up on the center and two gap his area on either side of the center. The strong side defensive end, (Ninkovich) will two-gap his area. The other side with Brown and Sheard will be a traditional 4-3 one-gap attacking style. It will also open up opportunities for the linebackers to blitz in openings on the outside as well. Lots of versatility and flexibility with this group as well as a nice mix of youth and experience.

On the Bubble: Geneo Grissom, Frank Kearse, Markus Kuhn
These three are competing for one or possibly two spots if the Patriots opt to keep 10 linemen on the defensive side. Grissom is a big guy who seems larger in person than his listed 6’4, 265 pounds. He brings the element of versatility and athleticism to the table. He can play special teams, something that always resonates with Belichick.

Both Kuhn and Kearse are big guys who will be looking to add some depth inside. Kuhn saw a lot of reps this spring and that may bode well for him this summer. He came over from the Giants and was considered a favorite of coach Tom Coughlin although his numbers didn’t translate on the field. Kearse is a 6’5, 310-pound defensive end who projects to move inside here with the Patriots. He’s spent time with the Panthers, Cowboys, and Redskins (2014-15) and will look to latch on as a backup.

The competition here should prove to be spirited. All of these players are worthy of a roster spot but it may come down to a simple numbers crunch unless the inevitable injury or two occurs in training camp.

Outside Looking in…. Longshots: Woodrow Hamilton, Anthony Johnson, Joe Vellano
Odds are long for Joe Vellano this season to make the cut. He’s one of those guys that you can’t help but root for. After being signed as a UDFA from Maryland in 2013, he made the team out of training camp and played in all 16 games with eight starts. But in 2014 he played in just four games with a single start and one playoff game. He was hurt early in training camp last season and will have a tough time to garner the reps this summer.

Johnson was signed by Miami as a UDFA in 2014 and appeared in seven games. He was cut by the Dolphins and spent part of 2015 as a practice squad player for the Redskins. The Patriots signed him to a free-agent contract in May.

Woodrow Hamilton is a big interior lineman from Mississippi. The 6’3, 319-pound tackle faces long odds. He and Bryan Stork were tossed from practice during minicamp for throwing punches at one another. That may set up something to watch this summer.

Check out our earlier primers on the running backs, wide receivers, tight ends, and the offensive line. And be sure to keep tuned into PatsFans.com during training camp as we’ll post daily updates from down in Gillette.