Perfect Balance of Offense and Defense

With The 2016 NFL Draft just days away and the Patriots still building the roster thru free agency, it is time for our final stab at predicting how Bill Belichick will go with Mock Draft 5.0. With a nice balance of five defenders and six offensive prospects taken in this draft, this would set the team up nicely in 2016.

Once again we’ve been using the great draft simulator at Fanspeak.com that we’ve been touting. The “On the Clock” simulator, you are the Bill Belichick picking for the Patriots, or any other team and the program picks for the other 31 teams based upon need.

For this fifth and final mock draft (conducted 4-23), I used the big board of Matt Miller, Bleacher Report. The big board chosen has a lot to do with it as each varies quite differently and some prospects rise and fall depending upon which you use. Needless to say, there were a few shockers once again.

A common theme that stands out in these mock drafts is the long amount of time between the Patriots selection at the back of the 3rd round and their next selection in the 6th. Expect them to trade into the 4th/5th round this week as the 100 prospects taken between picks thins out the potential available… Read on.

Round 2, Pick #1 CB Eric Murray, Minnesota:
Corners were flying off the board early in the process, something we may see this week. Murray was a three-year starter for the Gophers and is a very much under-the-radar prospect. He has good size at 5’11, 199 pounds, speed 4.48 time in the 40, and physicality.

Murray is good at press and off-man coverage as well as zone. He’s quick to come up and help in run defense and can blitz off the edge. Has good change of direction skills with nice hip flexibility and foot quickness. A film junkie, he breaks down opposing wide receivers and their tendencies.

Round 2, Pick #2 DT Robert Nkemdiche, Ole Miss:
Another shocker  this week, as Nkemdiche kept falling down the draft board. Do we expect this to happen this week? No, but can only hope that Miller is on to something.

Nkemdiche is a physical beast at 6’4, 296 pounds and has an incredibly strong lower body that makes him nearly impossible to move at the point of attack. He has elite level explosion out of his stance and can drive blockers back into the backfield.

Nkemdiche has some well-known red flags for some off-field issues, and the biggest question is would the Patriots even have him on their draft board? But he is an elite talent and if selected he and Malcom Brown would conceivably give New England an outstanding inside tandem for the next decade.

Round 3, Pick #3 S/CB Sean Davis, Maryland:
Davis has been scouted by the Patriots and they worked him out recently as his versatility as both a corner and a safety obviously appeal to Belichick and the coaching staff. Good size at 6’1, 201 pounds and absolutely shredded physically, Davis runs well (4.46 in the 40), has outstanding short area quickness and change of direction (6.64 time in the 3-Cone Drill) and hits like a ton of bricks.

Davis would be a nice movable chess piece moving between safety and corner and has the physicality to cover against tight ends. He looks like a safety physically but moves like a corner with his lower body movement. Speaks French and Chinese.

Round 3, Pick #4 RB Devontae Booker, Utah:
Booker has good size at 5’11, 219-pounds for the position and would be an outstanding addition to the Patriots offense as he excels between the tackles, can handle a full load of carries and is an every-down threat as a receiver out of the backfield as well. 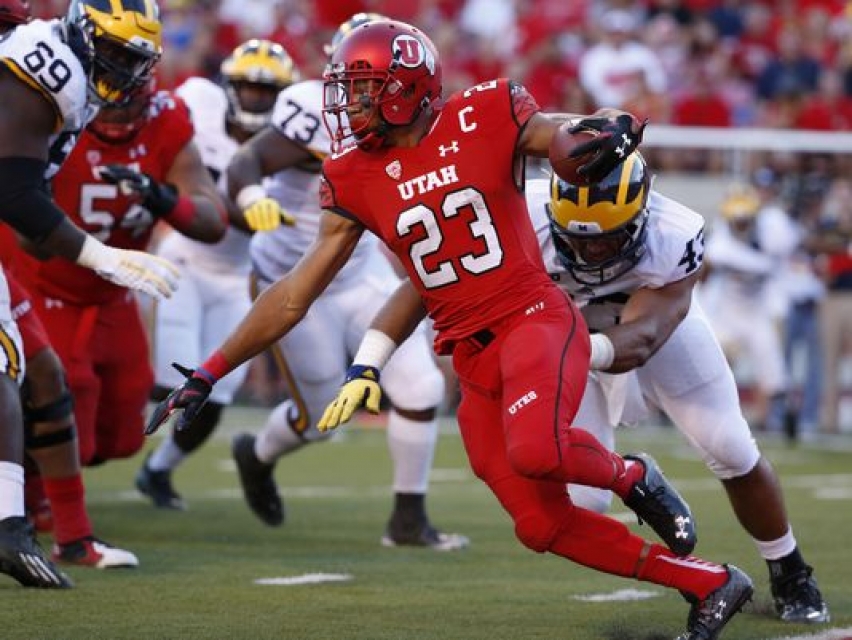 Round 6, Pick #5 OT Alex Lewis, Nebraska:
Lewis started his career at Colorado and played there two years before injuring his shoulder, having surgery and transferring to play at Nebraska for his final two years of eligibility. He started both seasons at left tackle although a switch to the right is probably in the cards for him.

He has good size at 6’6, 312 pounds for the position, shows good balance and a good punch to keep defenders at bay. Is a physical, tough guy in the running game. He has slow feet and is a bit of plodder however and has had some off-field issues back in 2013. His father played for the Patriots and Raiders.

Round 6, Pick #6 WR Michael Thomas, Southern Mississippi:
Nope not the Ohio State WR, the under-the-radar one that played for Jamie Collins’ alma mater in Southern Mississippi. Thomas was snubbed for the NFL Combine despite catching 71 passes for 1391 yards and 14 touchdowns. The 6’1,196-pound wide receiver also has outstanding leaping ability (36.5 inch vertical) that allows him to go up and get contested passes. He ran a 4.4 in the 40 at his school’s Pro-Day.

He has good size and speed, runs good routes, has very good hands and tracks the ball extremely well. Thomas can stretch the field vertically as well as horizontally. He did some time as the team’s kick returner as well.

Round 6, Pick #7 DE Anthony Zettel, Penn State:
Zettel has good size at 6’4, 277 pounds to play on the edge and either rush the quarterback or stuff the running game. He’s a very versatile player that kick inside as well that plays with a very high motor. In the East-West Shrine Game, he chased down a running back 40 yards downfield.

He’s disruptive and explosive and the fact that he can kick inside on obvious passing downs makes him a very attractive Day 3 prospect. That and as one scout said of him, “plays like his hair is on fire.”

Rob Rang from CBS Sports says Feeny “possesses the length, agility and closing speed to excel in coverage and special teams.” He has good physicality, can blitz off the edge with outstanding burst and is athletic and agile enough to cover. Had shoulder issues with surgeries on both.

Round 6, Pick #9 OT Brandon Shell, South Carolina:
Nephew of Raiders great, Art Shell, the Gamecocks’ tackle that played each side is an enormous, 6’5, 328-pound prospect. He was a four-year starter with 47 career starts under his belt.

Shell has good power and strength with a strong initial punch and can keep pass rushers at bay with his long arms. He needs help with his footwork and his mobility at the next level.

Round 7, Pick #10 QB Brandon Doughty, Western Kentucky:
Doughty was a three-year starter at WKU and finished up his FBS career with 111 TD passes (15th all-time), and had the 10th best career completion percentage at 68 percent.

Doughty has decent size at 6’3, 216 and has adequate arm strength but is inconsistent with his deep ball throw. Draft expert Dane Brugler from CBS Sports said that “Doughty was an ideal fit for the up-tempo scheme that relied on a quick release and smart decisions, making most of his reads pre-snap and identifying soft spots in coverage. He has improved functional pocket mobility and carries himself like a coach.”

His route running needs to get crisper but he has all kinds of potential and the Patriots have the offensive personnel now that they can take their time with him to develop him into a big target for the offense. Read our scouting profile here: 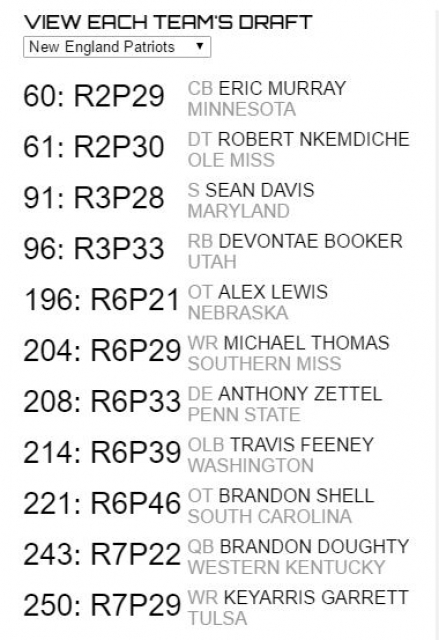