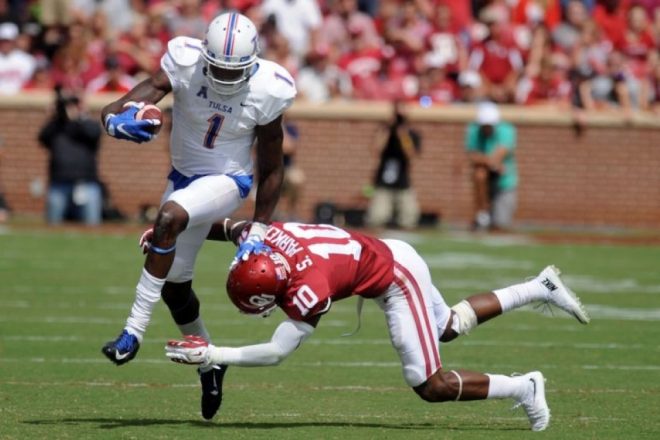 Still in need of a wide receiver, Garrett could be a Patriots target in the draft

The Patriots signed WR Chris Hogan in free agency but also told WRs Brian Tyms and Brandon Gibson that they won’t be bringing them back. However, the addition on TE Martellus Bennett to go along with Rob Gronkowski gives QB Tom Brady plenty of good options. Still, the team can use another WR and there are plenty of options in the draft.

The team returns Julian Edelman, Danny Amendola, Hogan, Chris Harper, Keshawn Martin Aaron Dobson and DeAndre Carter on the depth chart.  With the big TEs and the quickness underneath of Edelman, Amendola and Hogan, what is lacking is a big, physical wide receiver that has speed and one that can stretch the field horizontally as well as vertically. That is why they drafted Dobson in the 2nd round back in 2013. But he can’t stay healthy long enough to make a difference.

Before everyone gets all fired up about a “deep threat”, pump the brakes right there. That isn’t the Patriots offense since Randy Moss left town. Josh McDaniels likes to have the Patriots offense work the underside and width of the field. They spread the opponent’s defense horizontally, with WRs taking the cornerbacks outside the numbers. This in turn allows the tight ends and slot receivers to attack the seams and the soft underbelly of the defense. Many of Brady’s deepest passes are reserved for RBs on wheel routes or split wide in mismatches against linebackers.

Everything is ideally planned to execute between 1-15 yards of the line of scrimmage because Brady’s accuracy is laser sharp in that range. A big WR with speed will invariably find himself singled up on the outside because of the crowd that Edelman and Gronk draw on every play. Add Bennett to the equation and the mismatches continue to grow.

Keyarris Garrett from Tulsa is a player that will be a work in progress but brings to the table a lot of comparisons to Moss. He’s a classic deep threat receiver, with the long frame but powerfully built wide shoulders. He’s been very effective at using his size (6’3, 220 pounds), to simply post-up on cornerbacks.

Garrett has a long stride to speed by opponents and the size and physicality to win jump balls while being able to bring down balls in traffic. Possesses very good hands, timing on his jumps and has the quickness at the line where he can beat man coverage. CBS Sports Draft Expert Rob Rang was quick to point out the possibilities of his being a special player.

With a combination of height, strong hands and the speed to streak away from opponents, there were moments in 2015 in which Garrett brought back memories of a young Randy Moss.

Garrett ran a 4.53 in the 40 yard dash at the NFL Combine and 7.03 in the 3-Cone Drill.  He caught 96 passes for 1588 yards and 8 touchdowns for Tulsa in 2015. While the level of competition there wasn’t the SEC, he had a big game against Oklahoma grabbing 14 catches for 198 yards and a score against the Sooners. He definitely passes the eye test for an NFL outside wide receiver, and despite running a limited route tree in Tulsa, he should be able to help a team at the next level.

He has the raw physical makeup to be a really intriguing option for the Patriots, but would probably be more of a developmental player long term. He’d be a bit of a one-trick pony off the bat, but albeit one the fans have been clamoring for, a deep option for Brady and the Patriots. Garrett will most probably be available in the 3rd to 4th round.

– Improving as a route runner

– Excellent use of body positioning, can box-out and post up smaller corners

– A long strider, takes time to get to full speed

– Played in stacked, spread sets in Tulsa, can he learn the Patriots route tree?

What his Role Will Be:
His role will be a classic “X” wide receiver, in the same mode that Aaron Dobson and Brandon LaFell performed for the Patriots the past few years. He’ll be outside the numbers and work those deep intermediate come-backs or side line patterns with the occasional deep pattern as well.

Will his Role Change from Year 1-2?
If he can master the complicated Patriots playbook and route tree, there is a lot more that can be put on his plate.

What Current Player on the Roster Will He Replace?
Aaron Dobson

Conclusion:
Garrett is a very intriguing player in the upcoming NFL Draft. With the plethora of weapons at Tom Brady’s disposal, the Patriots can take a shot at him and allow him the opportunity to develop. He made need some time to find a comfort level in the offense but his upside is tremendous.

A player with his size, speed and physicality can be a very dangerous addition to this offense. With the many targets that Brady has to work the seams and underneath routes to keep the chains moving, Garrett is that classic deep strider that can stretch the field horizontally, vertically and give them another big body in the Red Zone that box out defenders and make the catches in traffic.

He projects in the Patriots system to be a Potential Starter on Day 1. He should fit in seamlessly into the NE offense