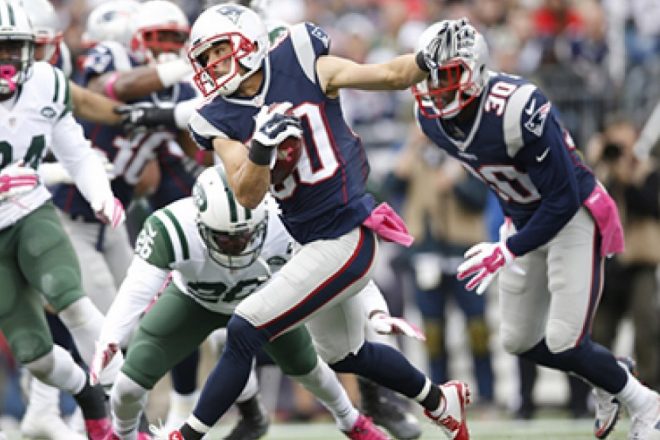 The Patriots controlled the line of scrimmage against a very tough Miami front four, despite having a limited and banged up offensive line and having one of their key running backs, Dion Lewis not at 100 percent physically either.

Washington has ranked in the bottom third of the league in rush defense all season and is currently 26th allowing 128.4 yards per game. They have some big bodies up front starting with Terrance “Pot Roast” Knighton and Chris Baker but look for the Patriots to mix things up and attempt to run more this week than they’ve been doing lately.

Brady continues his outstanding play on the season and has a plethora of weapons at his disposal, including Rob Gronkowski, Julian Edelman, Danny Amendola, Brandon LaFell and Dion Lewis out of the backfield.

The Redskins are banged up at the cornerback position and 2nd year player Bashaud Breeland has filled in admirably as the team’s #1 corner in the absence of both DeAngelo Hall and Chris Culliver. Their best pass rusher Ryan Kerrigan had surgery on his hand and is questionable for this one.

The Patriots will attempt to spread them out vertically more in this game which will open up things underneath and over the middle for Rob Gronkowski to operate in against the Skins LBs and safeties. The Patriots just have too many weapons for Washington to cover, adding Dion Lewis to the mix just compounds things. The Skins will need a very good pass rush on Sunday to keep this close.

Next up the Redskins offense:

By: Ian Logue
For a team that prides itself on special teams, especially given what happened just a few days ago, Thursday night's breakdown out in Minnesota is…
19 hours ago

By: Steve Balestrieri
“We got to move on from that play and play the rest of the game,” Jones said at his postgame press conference.
22 hours ago

By: Bob George
Kirk Cousins threw for nearly 300 yards and was sacked only once. Justin Jefferson had to be the main shutdown target, and he lit up…
1 day ago

By: Robert Alvarez
On "Inside The NFL", former New York Jet Brandon Marshall gets a Patriots tattoo after losing a bet with Julian Edelman.
3 days ago

By: Robert Alvarez
The Patriots fans of "NFL Fan Therapy" share their thoughts on their team's dramatic Week 11 win over the Jets.
3 days ago