7 years ago at 6:27 am ET
Follow @SteveB7SFG
Posted Under: Patriots Commentary 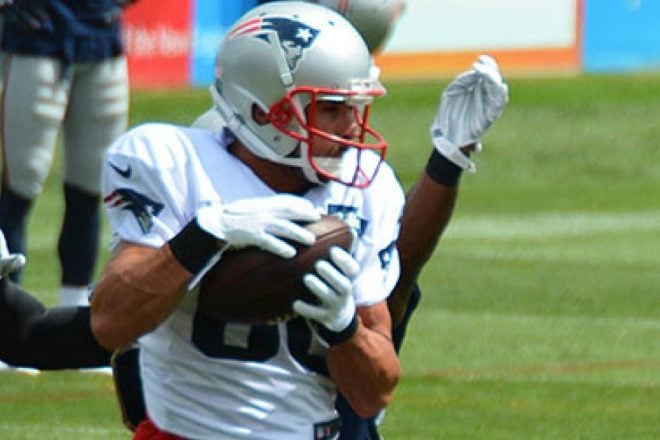 The Patriots conducted their Thursday afternoon in full pads after wearing shells in their in-stadium practice session on Wednesday evening.

As Bill Belichick pointed out in his press conference before practice, the prep for the first preseason game against the Packers began as referees will be on hand for three straight practices to acclimate players to the way games will be called. It is training camp for the officials as well as their now seeing their first live football of the season. The first game vs Green Bay is now less than a week away.

After the normal walk-thru, and warm-ups, the team went thru their normal individual drills followed by 1-on-1 with the receivers and cornerbacks getting some good individual work. There was a lot of 11-on-11 and 7-on-7 work during the session.

The focus on Thursday afternoon for special teams was the punt return game as well as the punt coverage team. For many of the players getting a role in STs is a path to getting a slot on the game day roster as Belichick has pointed out many times.

The team resumes practice on Friday afternoon for a 1:45 p.m. session and then on Saturday morning at 9:15 a.m.

The team announced a couple of roster moves as they signed OL Mark Asper and TE Mason Brodine.

TE Jimmay Mundine was hurt during practice and walked off with a member of the training staff. He didn’t return.

Amendola, Boyce, Gibson Have Solid Days: With no LaFell, Edelman and now Dobson, the onus of the WR duties fell to Danny Amendola, Josh Boyce and Brandon Gibson. Amendola in particular looked very solid as he and Brady were frequently making nice connections. Amendola made a nice catch over Logan Ryan early in the session.  He also split Darryl Roberts and Jordan Richards nicely where Brady dropped the pass in between the defenders perfectly. Ryan by the way seems to have fallen a bit behind Tarel Brown.

Boyce got a number of quality reps and the team was moving him all over the field. He beat Butler on a nice play that had WRs coach Chad O’Shea all fired up. Later on in 11-on-11 work he had a concentration drop. They were sending him on a few deep routes in the session as well.

Gibson had a couple of nice receptions on the day and is quietly turning in a good camp. He made a nice leaping catch in the corner of the end zone on a Brady pass. But the officials did flag him for pushing off on one play. Chris Harper also got more reps with so many players missing. He has good speed but didn’t stand out.

Geneo Grissom is beginning to come on a bit in recent practices. He’s showing off his athleticism during the 1-on-1 drills and is getting more reps on defense. He has a nice burst off the edge and can get a nice bend while turning the corner. After a bit of a slow start playing mainly STs he’s beginning to emerge.

Easley had two impressive wins during individual drills against Shaq Mason, once on a swim move and another where jumped inside using his quickness. Bryan Stork was impressive with a couple of wins. He’s also doing a great job in the running game. Dekoda Watson had a nice win over Cameron Fleming, using a quick inside move and beating him cleanly.

One of the highlights of every practice is watching ST’s coach Joe Judge work with his punt protection team as well as his punt blockers. He is animated and intense and provides a ton of one-on-one instruction. Rookies Brandon King, Xzavier Dickson and Matt Wells have been getting a lot of work with him.

Play of the Day #1: Tight end Rob Gronkowski had a deep catch down the right sideline on a perfectly thrown ball by Brady. Rookie Jordan Richards had about as tight coverage as you could get, running stride for stride with the big man but Gronkowski was able to leap up and pull the ball down.

It just shows how difficult a matchup Gronk is, when he’s healthy (which he is), he’s nearly impossible to cover with a single defender.

Backup guard/center Josh Kline and Jimmy Garoppolo had a fumbled snap had to take the “Lap of Shame” around the field. The defense had to take a pair of laps for having too many men on the field during a field goal attempt. As the intensity ramps up a bit with games upcoming, Belichick is leaving no room for error.

Jamie Collins during team activities came on a perfectly designed and timed blitz up the A-Gap where no one touched him. He would have sacked Brady easily but pulled up. Brady then dumped a pass off to James White out of the backfield. Check out the YouTube video.

Hurry Up Offense Looks Impressive: One of the situational football scenarios the team was working on was the hurry-up, 2-minute offense. Brady has always run it to perfection and Thursday was no exception. He’d quickly move the team to the line, survey the defense and run plays to get the team in position for a field goal attempt.

The defense’s answer to the hurry up was sort of a “NASCAR Package”, having a smaller, faster more athletic group on the field in the front four. Matt Patricia rolled out Chandler Jones, Rob Ninkovich, Dominique Easley and Jabaal Sheard while rotating guys in and out. This will be something to monitor going forward. It was an intriguing bunch to watch.

Brady during team drills was again very sharp; by my un-official calculations he was 20-28 on the day. Garoppolo was 12-16 with one interception….which brings us to our next subject…

Wilson read it perfectly and stepped in front of the pass and picked it off. He returned it for what would have been a touchdown. Garoppolo took a little too long a look at Bequette there, but it was a great instinctive play by Wilson.

By: Robert Alvarez
Patriots Chairman and CEO Robert Kraft is honored by two organizations for his charitable and humanitarian work.
14 hours ago