August 9 in Pats History: BB/Pats Draft a QB in the 6th Round

During the 2003 draft the Pats traded down eleven spots in the fifth round, from #154 to #164. In return Tennessee gave the Patriots their sixth round draft pick; the two clubs also swapped seventh round picks. New England used their fifth rounder on Dan Koppen, who started at center for eight seasons; with the freebie in the sixth the Pats selected Kliff Kingsbury. The player Tennessee just had to have was Donnie Nickey, a special teams ace who did play for eight seasons - but was never close to being as important or as good as Koppen was. 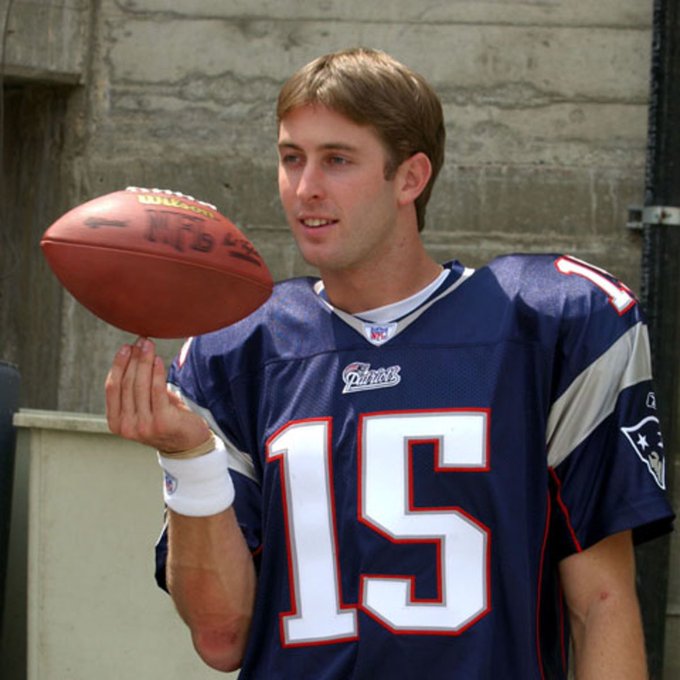 At the time New England had Rohan Davey and Damon Huard backing up Tom Brady, entering his third season as an NFL starting quarterback. Kliff Kingsbury never got on the field for the Patriots, but he did get a Super Bowl ring. Kingsbury spent the entire 2003 season on IR with an arm injury, and was cut the following September at the end of training camp when teams need to get down to their regular season roster limit.

Kingsbury later spent time on practice squads for the Saints and Broncos, and in 2005 appeared in garbage time for one game with the Jets. New York then allocated him to Cologne for the 2006 NFL Europe season. After having been waived by Buffalo at the end of their 2006 training camp, his pro football playing days finished in 2007 as the third string quarterback of the Winnipeg Blue Bombers in the CFL.


The following year Kingsbury took an entry level coaching job at the University of Houston. He quickly progressed, and was named college football's Offensive Coordinator of the year in 2011 after the Cougars scored an average of 50 points per game. That led to being hired as the OC for Texas A&M. In 2012 the Aggies were the only team in college football ranked in the top 15 for scoring offense, total yards, rushing yards and passing yards - and QB Johnny Manziel won the Heisman Trophy.

A year later at the age of 36, Kingsbury became head coach at Texas Tech. Despite the Red Raiders posting mediocre records (7-5, 4-8, 7-6, 6-7, 5-7), Kingsbury became a hot topic among speculation for coaching hires. Much of that was due to Patrick Mahomes' first season as an NFL starter; Mahomes was the QB in 2016 for Kingsbury when Texas Tech had the sixth best offense in college football. Overlooked was the fact that they also had the worst ranked defense.

Early in 2019 Kingsbury signed a contract to become head coach at Southern Cal, then resigned when offered the same position by the Arizona Cardinals. The Vegas over/under on win totals for the 2019 Cardinals was just five, after coming off a 3-13 season. The linemakers were spot on, with Arizona going 5-10-1. Last year Arizona stood at 6-3 after defeating Buffalo in week 10, but stumbled to an 8-8 finish. While it was not enough to give them their first winning season since going 13-3 in 2015, at least it avoided a third straight last place finish. The oddsmakers aren't showing much faith in improvement though, setting the line for Arizona's 2021 win total at 8.5 - which would place them fourth in the NFC West, behind the Rams (10), 49ers (10) and Seahawks (9.5). 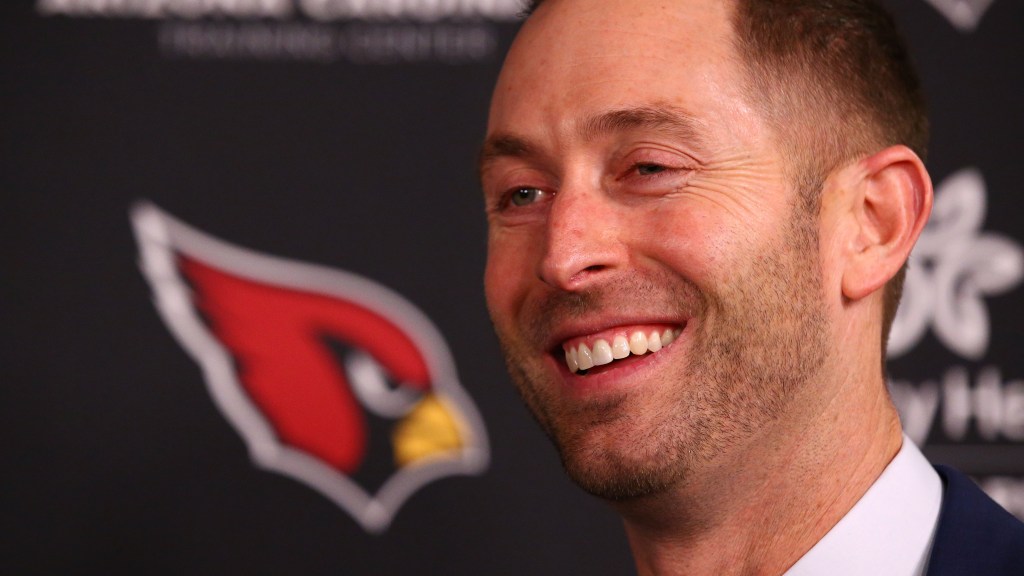 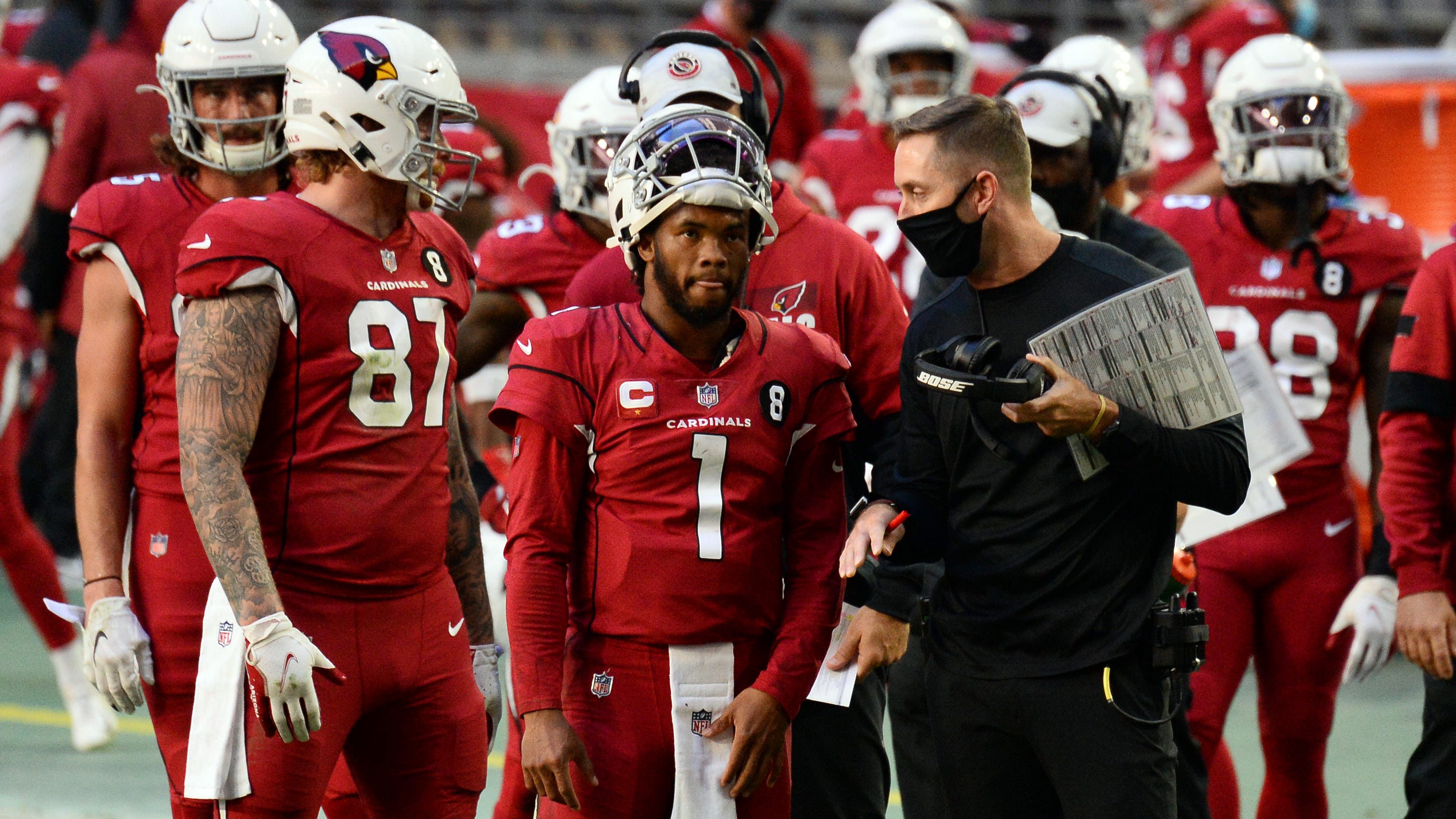 Cardinals coach Kliff Kingsbury spent a year in New England when he was drafted in the sixth round of the 2003 draft.
www.enterprisenews.com


The 41-year-old Kingsbury told the media in Arizona this week that his one season being part of the Patriots was invaluable.​
“I learned more football in that short time than any other stop along the way when it comes to coaching and pertaining to coaching,’’ Kingsbury said. “The work that goes in and the game-planning, preparation day in and day out.​
“I really got to see behind the scenes there. It was phenomenal being around all those coaches that went on to be head coaches and went on to win a bunch of Super Bowls, and obviously, getting to watch that Super Bowl (against the Panthers) was phenomenal.’’​
“The way they operate, the level of preparation, the competitive in practice, those are all things that stay with you for life when you’ve been in that building,’’ said Kingsbury of the Patriots in 2019 after being hired. “That’s kind of the mountaintop of preparation and competitive. You can see why they win so much.’’​
Kingsbury said that Belichick has been a help to him through the years since leaving the Patriots.​
“He’s obviously a legend,’’ Kingsbury told the media. “There’s definitely an intimidation factor there, even when you’re done playing, just because of all he’s accomplished and what he’s about.​
“But he’s been amazing to me over the years. Even when I got fired at Texas Tech, he reached out, and he allowed me to come up there when I was at Texas Tech and sit in on meetings, go to practices. I can’t thank him enough for all he’s done for me.’’​
July 21, 2021: 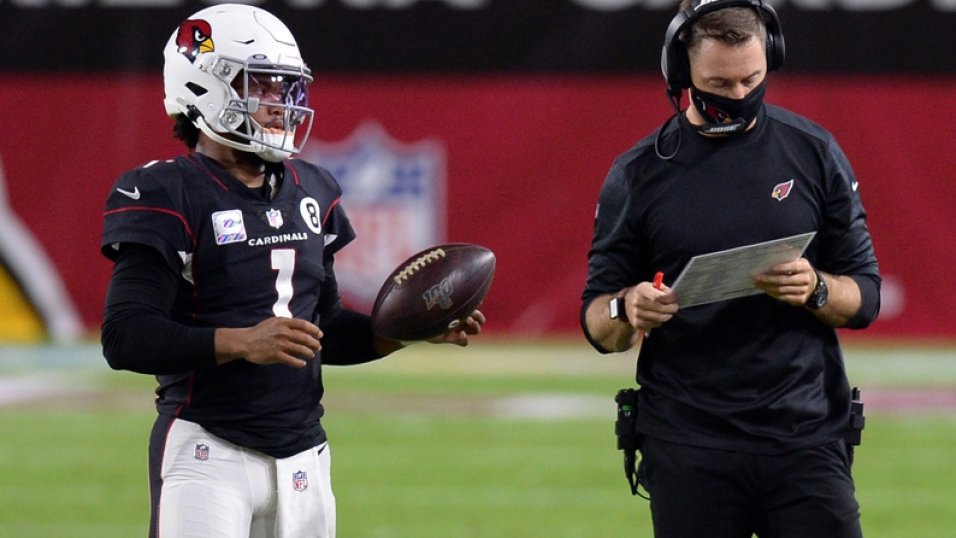 Arizona Cardinals head coach Kliff Kingsbury's offense needs to move further away from its roots to thrive in the NFL | NFL News, Rankings and Statistics | PFF

Arizona Cardinals head coach Kliff Kingsbury is at a crossroads and needs to continue to adapt his offense in order to take the next step during the 2021 NFL season.


The Cardinals sacrifice the boost a receiver gets from moving around to find favorable matchups in exchange for added speed and efficiency that comes with every player always knowing where to line up and the tempo it allows.​
Kingsbury’s offense is at that crossroads right now. NFL defenses have a pretty good handle on how to combat his offense. He had to adapt his system significantly to even get to where it is today. While showing that adaptability stands in his favor right now, it needs more.​
The 2021 season is critical for Kingsbury. The team has a lot of talent at its disposal, but Kingsbury needs to break out the next phase of his offense.​ 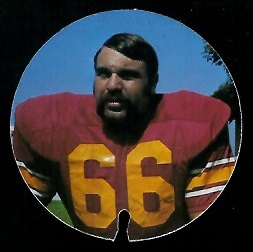 In 1975 Bill Bain was a second round draft pick out of USC in by the Packers. Bain was the starting left tackle for the Rams in 1983 when Eric Dickerson set NFL rookie records for most yards rushing (1,808), touchdowns (18) and yards from scrimmage (2,212). Bain was again at left tackle the following season when Dickerson set NFL all-time single-season records for rushing yardage (2,205) and 100-yard rushing games (12).

Bain arrived in Foxborough at the tail end of a twelve year NFL career for the last three games of the 1986 season, plus the 22-17 playoff loss at Denver. That 1986 season had a rough ending, with Andre Tippett, Clayton Weishuhn and Steve Nelson all going on IR in November, and then Irving Fryar suffering a concussion in an automobile accident.

Bain had wanted to return for a 13th NFL season, but he and GM Patrick Sullivan were unable to agree to terms for another contract.

It Has Been a Strain, Says Bain; No Longer Can He Carry Around 300 Pounds 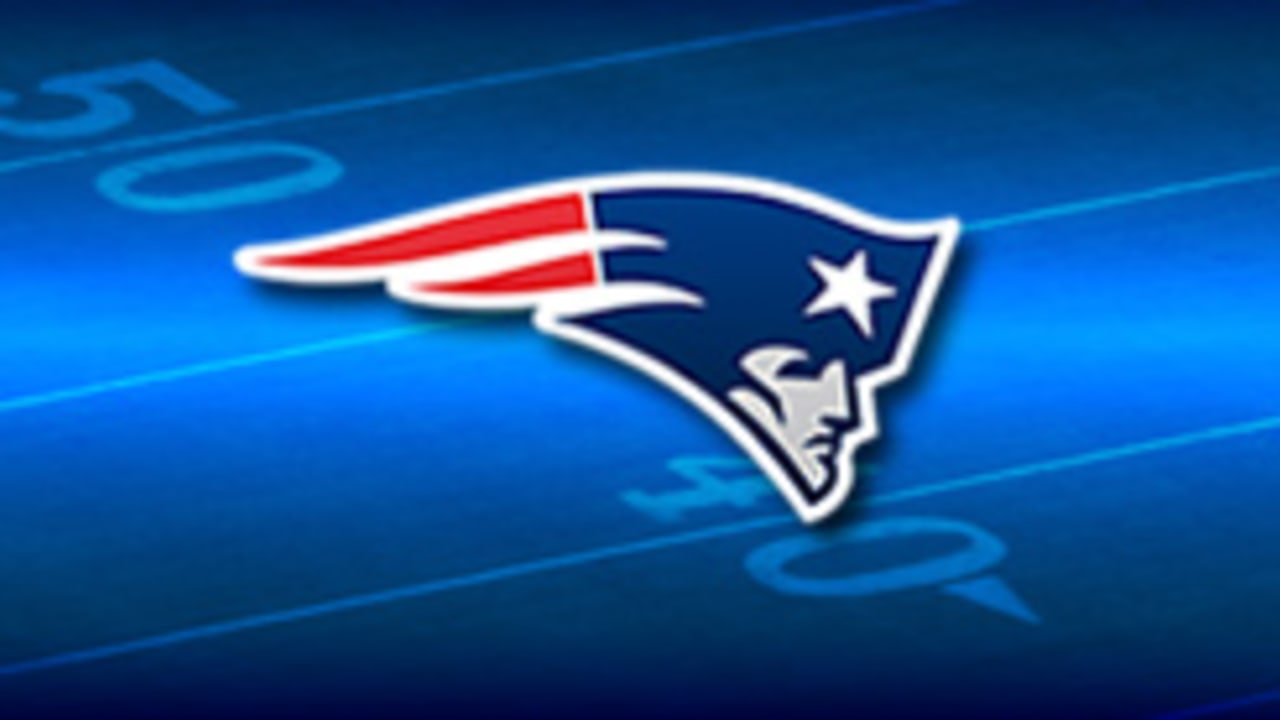 The New England Patriots announced that they will dedicate the 2011 season to the loving memory of Myra Kraft, who passed away on July 20 after a courageous battle with cancer.

www.patriots.com
The New England Patriots announced that they will dedicate the 2011 season to the loving memory of Myra Kraft, who passed away on July 20 after a courageous battle with cancer. On Thursday, Aug. 11, when the Patriots kick off the 2011 campaign against the Jacksonville Jaguars at Gillette Stadium, every Patriots player and coach will honor Myra's memory by wearing a patch with her initials on it in recognition of her lifelong contributions to the local and global community and her influence on the charitable mission of the entire Patriots organization. The patch will be worn on the left chest of every player throughout the season.​

- Anthony Castonzo, 33 (1988)
Boston College
The 22nd overall selection of the 2011 draft has been a ten-year starter at left tackle for the Colts.

- Tom Gormley (8/9/91-7/24/51)
Born in Bridgeport; Naugatuck High School
Tom played in the inaugural and second season of the American Professional Football Association; the following year the APFA would be renamed the National Football League. Prior to that Gormley played football for three years with the legendary Youngstown Patricians (or Pats, for short). He also later became coach at Catholic University in DC. Tom Gormley spent his post-football career in the service; he was a first lieutenant in the United States Army Quartermaster Corps and is buried at Arlington National Cemetery.


- Red Steele (8/9/97-3/28/74)
Harvard
Percy Davis Steele was an end for the 1921 Canton Bulldogs. In 1924 he bought a home in Honolulu, and married a socialite and former newspaper woman in 1927. Percy Steele was a career U.S. Marine who in 1956 was named assistant administrator of the Marshall Islands. His family had been eyewitnesses to the Japanese attack on Pearl Harbor. Percy Steele's daughter Karen became a Hollywood actress, appearing in 18 films, 67 television shows and many television and radio commercials.


- Joe Kozlowsky (8/9/01-12/22/70)
Born, raised and died in Cambridge; Cambridge Latin High School; Boston College
The tackle played at the Cycledrome for the Providence Steam Roller, and at Braves Field for the Boston Bulldogs from 1925 to 1930.


- Charley Granger, 83 (8/9/38)
Pats 26th round (203rd overall) allotment of the 1961 AFL disbursement draft
The tackle from Southern University chose the NFL over the Patriots and the AFL, but only lasted one season in the elder league.

- Bill 'Bubba' Forester (1932-2007); a seven-year defensive captain on the Packers, the OLB was named to four Pro Bowls and never missed a game in 11 seasons.

- Gene 'Big Daddy' Lipscomb (1931-1963); the 6'9 All Pro defensive tackle was a major part of 1958 and 1959 Baltimore Colts championship teams. He did not go to college and was undrafted; his prior experience was playing on the Marines football team at Camp Pendleton. Demons from a sad upbringing - he never knew the father who abandoned him, and his mother was murdered when he was 11 - created an insatiable appetite for women, liquor and drugs, and a path that led to his death due to a heroin overdose at the age of 31. The Ballad of Big Daddy | Sports Illustrated

- Deion Sanders, 54 (8/9/67); HoF CB returned nine of his 53 interceptions for touchdowns when he wasn't returning punts, attempting to be a wide receiver, playing baseball, or marketing himself to the next highest bidder.

- Gene 'Big Daddy' Lipscomb (1931-1963); the 6'9 All Pro defensive tackle was a major part of 1958 and 1959 Baltimore Colts championship teams. He did not go to college and was undrafted; his prior experience was playing on the Marines football team at Camp Pendleton. Demons from a sad upbringing - he never knew the father who abandoned him, and his mother was murdered when he was 11 - created an insatiable appetite for women, liquor and drugs, and a path that led to his death due to a heroin overdose at the age of 31. The Ballad of Big Daddy | Sports Illustrated

Fascinating story about Big Daddy Lipscomb...Terribly sad childhood...Re-molded in the Marines (I can relate)...HOF-caliber career if he didn't die prematurely.; young men & money are a dangerous pairing sometimes (I can also relate)...HOF-worthy regardless?
You must log in or register to reply here.

May 25 in Pats History: Kevin O'Connell