April 18 in Pats History: An Offseason/Preseason Hall of Fame Legend

Initially Zach Sudfeld was considered to be nothing more than camp fodder, stuck on the depth chart behind Gronk, Aaron Hernandez, Michael Hoomanawanui, Daniel Fells and Jake Ballard. Sudfeld impressed in the offseason and in preseason games - including a TD and two-point conversion in week two. With AH infamously released, the 6'7 Sudfeld went from nobody to fan favorite and survivor of final roster cuts.

The fairy book tale didn't last long though. In week one a pass bounced off his hands for an interception. Then after being inactive for one game, in week three a pass thrown his way in the end zone was picked off. In week four as part of the hands team he fumbled away an onside kick for the trifecta; three days later he was released, bringing an abrupt end to his brief meteoric New England Patriot career.

Of course Rex Ryan couldn't help himself, claimed Sudfeld off waivers, and predictably named him captain when the Jets played the Pats. Zach appeared in 27 games for the Jets in 2013-14, totaling ten receptions for 148 yards and zero touchdowns. He spent 2015 on IR after tearing his ACL in minicamp, and was released at the end of training camp in 2016.

His legacy lives on, however. Patriot fans now have the Zach Stud-feld/Markell Carter Award, given to a new player who is wildly overrated by fans and the media during training camp and preseason games. 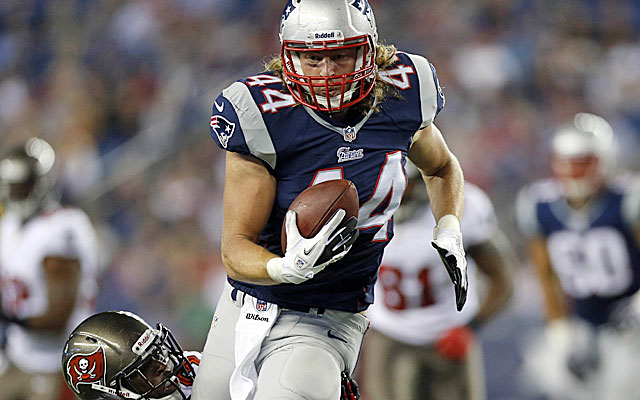 Zach Sudfeld was a 6'7, long blonde hair fan favorite for a month, but his career stat line with the Patriots
reads zero receptions on three targets in three games, with two of those passes resulting in interceptions.​
On a side note his brother Nate was drafted by Washington in 2016, and earlier this month signed a contract with the 49ers. The younger Sudfeld is the quarterback infamously being inserted by coach Doug Pederson into Philadelphia's final game of the 2020 season, when the Eagles would benefit with a loss (moving up to the #6 slot). In his first playing time of the entire season he performed about as one would expect: incomplete, handoff, interception; five-yard completion, and aborted nap resulting in lost fumble.

David Green went to Boston College and rushed for 1018 yards at 5.1 yards per carry his senior year. In the 1994 Aloha Bowl he ran for 127 yards in a victory over #8 Kansas State. David appeared in the first two games of the 1995 season for the Patriots on special teams, but never had an opportunity to touch the ball.

Green is most well known for a play he wishes everyone would forget. In 1993 #17 BC defeated #1 Notre Dame 41-39 in what is arguably - despite the legend of Hail Flutie - the greatest football game in BC history. The following week the Eagles moved up from #17 to #11 in the national rankings. The next game was a winner take all showdown for the Big East title against undefeated #5 West Virginia at Alumni Stadium. The Eagles dominated the game, but were unable to put the Mountaineers away. BC was driving for a clinching TD, already up 14-10 - but a fumble by Green at the 37 yard line with under two minutes to play gave West Virginia life. The Mountaineers drove down the field to score a go-ahead touchdown, denying the Eagles their first New Year's Day bowl game as well as the Big East title.


April 18, 1979:
Patriots hire Billy Kinard as their defensive backs coach. A second round draft pick by Cleveland in 1956, Kinard was a college and pro coach from 1961-1980 after four seasons in the NFL.

April 18, 2012:
LT Matt Light retires after 11 seasons and three championships, all with the Patriots.

Walt Sweeney (4/18/1941 - 2/2/2013)
Sweeney is one of only two pro football players from Cohasset. He played his college ball at Syracuse and was the second overall pick in the 1963 AFL draft by San Diego. Sweeney was a nine-time Pro Bowl and two-time All Pro right guard for the Chargers. He played for 13 years and missed just one game during that time, in his final season. The hard living Sweeney probably suffered from the old guard bias that prevented many AFL players from being elected to the Pro Football Hall of Fame. Merlin Olsen once said that if he had to play against Sweeney every week, "I'd rather sell used cars."

John Sinnott, 63 (4/18/1958)
Sinnott was a left tackle who spent four seasons in the NFL with the Baltimore Colts and New York Giants. He appeared in nine games with seven starts for the Colts in 1982. Sinnott graduated from Dedham High School and Brown University, with a degree in civil engineering. Last July he retired as vice president and Business Unit Leader at Gilbane Building Company, where he oversaw some impressive projects. 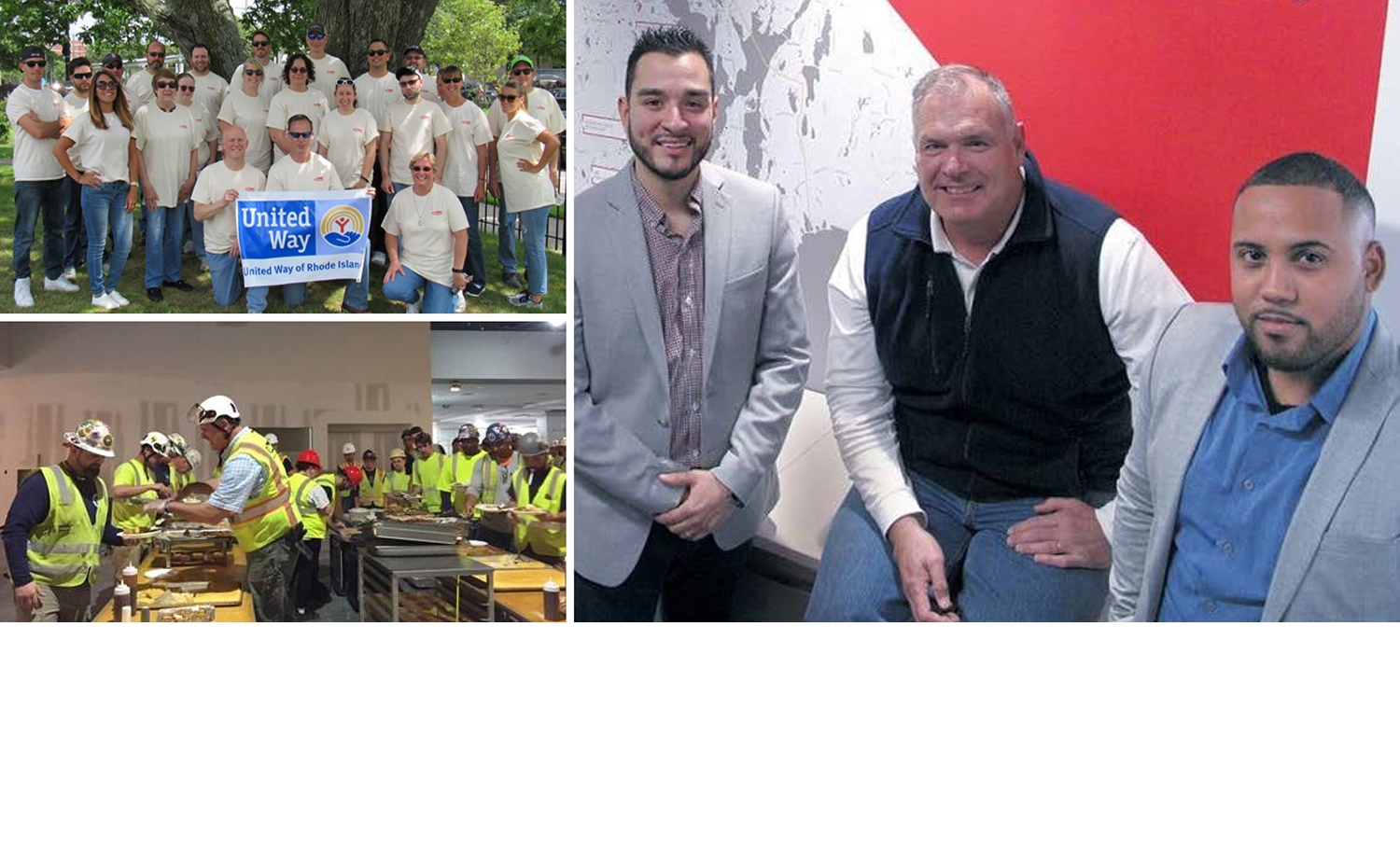 This July, after more than a decade of leading successful teams with Gilbane Building Company, John Sinnott is retiring from his position as business unit leader for Rhode Island. Throughout his career, John served as principal in charge for key Gilbane building projects in the state, including...


Throughout his career, John served as principal in charge for key Gilbane building projects in the state, including the East Providence High School and the North Providence Stephen Olney and James L. McGuire Elementary Schools as well as the General Dynamics Corporation Electric Boat $1.8 billion facilities master plan program, and The Interlink at T.F. Green Airport. His industry contributions have been numerous as he has represented Gilbane as president of the Rhode Island Chapter of the Associated General Contractors of America, Inc., as well as serving on the Advisory Boards for the Providence Foundation and Capital Center Commission, and the Advisory Council for the Rhode Island ACE Mentor Program.​
​
As a champion of workforce development, John serves as Co-chair on the Governor’s Commission for Diversity in the Construction Industry and is Vice-chair of Skills for Rhode Island’s Future. Through these associations, John helped to further showcase Gilbane’s strong and lasting commitment to building a diverse and inclusive workforce.​
Steve Cheek, 44 (4/18/1977)
Cheek attended UMass and was a punter in 2004 with the Kansas City Chiefs. He also spent time with the Eagles, Giants, Texans, Niners and Panthers, and was also in NFL Europe for two years.

Horrible, HORRIBLE drafting by Booby...These drafts plus the Special Olympics-sized 1997 draft were the reasons why that incompetent dumbass was sh!t-canned...His best pick of that ENTIRE list above was Marshfield's own Sean Morey, but Bill screwed-up by releasing him...He would've made for a nice #5/6 WR & Big-4 STer, especially when considering that we were looking at only Troy Brown, Charles Johnson, a disgruntled Terry Glenn & a still-relatively-unknown David Patten entering 2001...

The only other pick worth a crap was Greg Spires, but once Bill began the installation of the 3-4 defense in 2000 and drafted Seymour in 2001, there was no place for him here...

Staff member
Robert Edwards had a nice rookie season, then of course there was the life-threatening knee blowout during Pro Bowl week playing beach volleyball. Tony Simmons was a huge letdown, especially considering his speed. Actually almost everything in those Grier/Carroll years was a letdown.

There was definitely a revolving door for WR depth in 2000-01: Simmons, Charles Johnson, Chris Calloway, Shockmain Davis, Curtis Jackson, Bert Emmanuel, Torrance Small, Fred Coleman. . . keep throwing them at the wall and see if one eventually sticks. Amazing what they were able to accomplish with that crew. Could likely never happen today with the changes in rules and way game is officiated now, no matter how good the defense is.
You must log in or register to reply here.