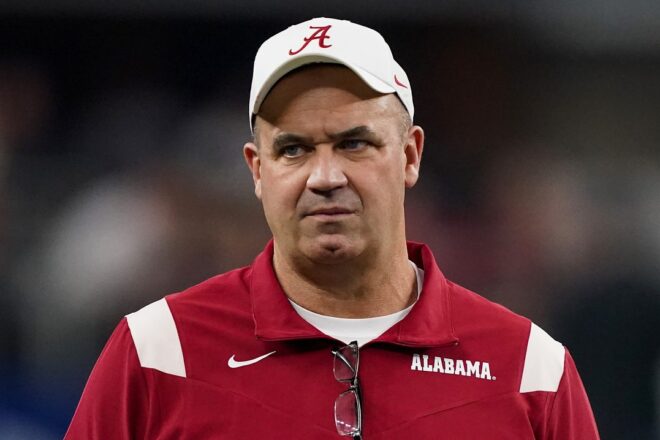 The Patriots made their expected move of hiring a true offensive coordinator, and this time they hired a very experienced OC and QB coach in Bill O’Brien, who has also served as a head coach in both college (Penn State) and in the NFL (Houston).

I had originally hoped to get a new (read: outside face) in like Keenan McCardell in, to see a fresh outlook on the offense, but Bill Belichick likes familiarity. That’s why O’Brien was the front-runner for the job.

And in truth, O’Brien makes a ton of sense. He has worked with Belichick, working his way up from a coaching assistant to OC. So, the Patriots system that has been in place for the past 20+ years, with some tweaks, is still in place and is known by him. Even more so, he coached at Alabama, so he and Mac Jones can speak the same language. O’Brien gave Jones credit for helping him learn the Alabama system.

So, what are the next things that need to happen besides adding more coaches to the mix? Here are a few things that O’Brien needs to look at.

Do A In-Depth Self-Scouting Look At the Offense:

O’Brien has been in the college game for the past few years, so his players and how they fit the system will be looked at hard. I imagine he’s looking at the players and the tape from 2022 and evaluating who needs to stay, who goes, and what players need more work.

Were the skill position players used correctly? Look at Hunter Henry and Kendrick Bourne’s numbers from 2021 under Josh McDaniels and with a rookie QB. They were back in 2022, and their usage was not utilized well at all.

The OC and QB need to iron out how O’Brien sees the offense running in 2023, and decide what Jones does well and play to those strengths.  At this stage, they must decide what each of them is comfortable with and work within those parameters. O’Brien is ultimately responsible, but the QB has to be comfortable running it. That’s where coaching comes in.

It sounds simple. However, as we saw this year, it isn’t always so. I know many fans were on social media, saying that “O’Brien will never tolerate Mac mouthing off,” which is very true. O’Brien is a no-nonsense type of coach. But the best part of having him back is that the play-calling and play-design will be much, much better in 2023.

Of course, that isn’t setting the bar very high. But he knows how to run the offense. And so early in the process, the two have plenty of time to get the kinks ironed out.

We may see a return of the “12-personnel” packages (1 RB, 2 TEs, 2 WRs) that the Patriots ran when he ran the offense in 2010-11 with Rob Gronkowski and Hernandez on the field. Now, before anyone jumps off the handle, no one is saying that Henry and Jonnu Smith are the equivalents of those two. But they’re much better players than they’ve shown, and that’s where the OC comes in.

We still don’t know if Jakobi Meyers will return in 2023, or will he command so much money that he prices himself out of New England? Meyers has been Jones’ go-to guy for the past two years. He’s an excellent possession type of receiver.

But as reliable and sure-handed as he is, he offers little in yards-after-catch. The Patriots need a playmaker, a player the opposition needs to game plan against. Having a player with speed on the outside or in the slot is essential.

The Patriots have always had their quicker players in the slot. Troy Brown, Wes Welker, Julian Edelman… they need that athleticism there. On the outside, Tyquan Thornton was a rookie and wasn’t utilized correctly. Having the fastest WR run 3-5-yard routes for a guy who builds up his speed isn’t conducive to his being successful.

Can O’Brien and DeAndre Hopkins bury the hatchet? The two didn’t get along in Houston, and Hopkins’ trade to Arizona was the beginning of the end for O’Brien there. Hopkins has been frequently linked to the Patriots. But he has a no-trade clause and could veto a trade to New England. JuJu Smith-Schuster is a free agent. If the team were to resign Meyers and snag Hopkins in a trade or Smith-Schuster in FA, it would be a much better-looking group talent-wise.

Basically, either way, it would trade out Nelson Agholor for Hopkins or Smith-Schuster. And with Meyers, Bourne, Devante Parker, and Thornton with a year in the system, it would be a much better group. They will probably add a WR in the draft.

Sign a FA Tackle and then Draft a Young Tackle:

Trent Brown is returning in 2023, but they need an overhaul here. If they are able to sign a premier left tackle in free agency and then add one in the draft, it would be the best of both worlds.

I’d bring back Connor McDermott, who they plucked from the Jets’ PS, and he could provide depth at the position. He filled in okay. He is not a starter, but he proved he could play, and they could let him compete for the roster.

There are a few outstanding tackles in the draft; the three most recognizable are Paris Johnson of Ohio State, Georgia’s Broderick Jones, and Peter Skoronski of Northwestern. It is very early in the draft process, but those three are supposed to be gone by pick #11 in the 1st round. The Patriots pick at #14. But things can and will change.

O’Brien, because of his experience and the respect Belichick has for him, will have a say in the wide receivers and tackles they’ll be targeting.

It will be fascinating to see how the rest of the offseason unfolds. Now we should be able to see if Mac Jones will truly be a franchise QB, which was impossible in 2022.