1 month ago at 6:00 am ET
Follow @MarkMorse5
Posted Under: Patriots News 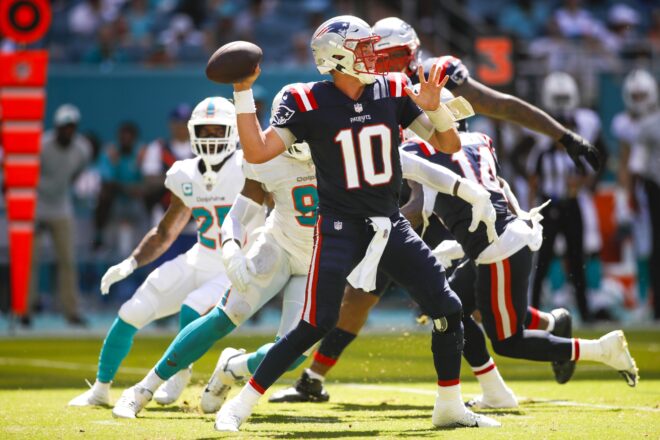 Miami is limping into New England.  They lost last week to Green Bay at home, where they have a tremendous advantage because of the heat (it was actually cold in Miami last weekend).  Unfortunately, the Patriots are not going to receive their home-field advantage of cold weather.  Temps are supposed to reach the 50s on Sunday.

The biggest news was Miami putting Tua Tagovailoa in the Concussion Protocol.  He is listed as Questionable but I have read that Miami declared him Out for Sunday already.    That would be the smart thing to do.

Teddy Bridgewater is the man now.  He is a very capable backup and although he doesn’t possess the skills that Tua has he will manage the game well and can utilize the many weapons the Phins have on offense.  Here are Bridgewater’s stats:

I can’t believe I am going to say this!  The Patriots will try and smother the Dolphins’ running game and play zone in the secondary and hope that Bridgewater will make a mistake.

If Bridgewater should go down, Skylar Thompson is the 3rd QB.  He has seen action in 5 games this season.

Although the Dolphins have not ruled Tagovailoa Out, he will/should not play this week and maybe longer.

This position is much different from the start of the season.  Raheem Mostert is the starter and Jeff Wilson is the #2 back.  They share the carries.  They each carry the ball about 10 times a game.  Here are their stats:

Salvon Ahmed is the 3rd back and he is very capable.  Tua has not run much this season (24 for 70 yards), and only ran twice for no yards in the 1st meeting.

This is the bread and butter of the Dolphins.  In the article previewing the 1st week, I talked about their improved speed.  Replacing Davante Parker with Tyreek Hill was a huge lift.  Parker is the worst WR trying to get separation from a DB in the league and has been for the last three years.  Replacing him was addition by subtraction.  Getting Tyreek Hill is the icing on the cake.  He is speed personified.  Hill is the quickest and fastest WR in the league.  He will take a little crossing pattern and outrun the defense for a TD.  Jaylen Waddle is just as good if not better.  Up-and-coming WR Trent Sherfield has impressed over the last month and he has pushed Cedric Wilson into the background.  He is another smurf with turn-and-burn speed. Here are their stats:

The Wide Receiver group has been healthy all year and their numbers show that with two receivers well over 100 receptions and 1200 yards each.  Waddle’s 18.8 yards per reception is a great number.

Mike Gesicki has given way to Durham Smythe as the #1 TE.  The Phins tried in vain to trade Gesicki at the trade deadline.  Gesicki does have 4 TDs among his 15 catches on the year.  Smythe has 11.  Smythe is a much better blocker and Gesicki never gets into a three-point stance.

This is an area Miami has had problems with.  PFF.com ranks them 22nd in the league.  They still have the Patriots’ O-line as #8. Left Tackle is manned by Terron Armstead who the Dolphins signed away from the Saints.  The 10-year vet is a 4-time Pro Bowl LT.  Armstead also was selected as a 2nd team All-Pro in 2018. Left Guard Liam Eichenberg is a 2nd Round selection out of Notre Dame in 2021 and has started 20 of 20 games in his career.  Center has Free Agent Connor Williams who came over from the Cowboys.  Drafted in 2018, Williams worked his way into the starting lineup in 2019 and played 11 games before needing knee surgery which ended his season.  In March of 2022, Williams signed a 2-year $14M contract with the Dolphins.  Right Guard Robert Hunt was drafted in the 2nd Round of the 2022 draft.  Hunt has played in 36 of 41 games he has suited up for.   Right Tackle Brandon Shell came up from the Dolphins Practice Squad and has started 6 games.  He is the grand-nephew of Hall–of–Fame Tackle Art Shell.  The 7-year vet was drafted by the NY Jets and has started 60 of 71 games he has played in.  Of all the linemen he is the weak link.  The Dolphins pass a lot and their QBs have been sacked 32 times this year.  It will be imperative that Uche and Judon put pressure on Bridgewater.

The front three for the Dolphins are formidable.  It starts with LDE Christian Wilkins who has 86 tackles and 51 solos. He makes plays sideline to sideline and was named 1st alternate to the Pro Bowl. The 2019 1st round pick out of Clemson played High School ball at Framingham MA HS before moving on to the Suffield Academy in Connecticut.   Raekwon Davis is stout at the Nose Tackle position allowing the linebackers to run free and make tackles.  Zach Seiler has emerged as a solid RDE with 61 tackles.  He was a 7th Round pick of Baltimore and played 2 games for them in 2018.  Miami picked him off waivers in 2019.  He had 3.5 sacks last year and 2 so far this season.  John Jenkins is a solid backup.

Old friend Elandon Roberts is the leading tackler for Miami with 93 followed by fellow linebacker Jerome Baker with 92.  The Roberts signing, taking him away from the Patriots has worked out well for the Phins.  Baker signed a three-year extension with the Dolphins in 2021.  Jaelen Phillips is another player that has developed well in the Dolphins system.  Phillips was a 2018 1st-round pick by Miami out of the University of Miami.   It took him a while to break into the lineup as last season was his 1st as a full-time player,  he had 42 tackles and 8.5 sacks.  This season he has 7 sacks to lead the Dolphins.  Bradley Chubb was acquired by Miami in the 2022 season.  He has played 8 games for the Dolphins and has 28 tackles and 5 sacks.   Kader Kohou has 68 tackles bouncing between starter and backup.  Andrew Van Ginkel has 43 tackles as a backup.  Former Patriots special team ace Justin Bethel and Verone McKinley provide backup help.

Jevon Holland is a superior Safety.  He leads the secondary with 81 tackles, 4th on the team.  He was the Dolphins’ 2nd rd pick in 2021 #36 overall and the 1st Safety taken.  Eric Rowe, another former Patriot, is a strong safety and has added 64 tackles, almost equaling his output from last season.  Xavien Howard is a superb cornerback that the Dolphins place on the opponent’s top receiver. Howard was a 2nd round pick in 2016.  The veteran has 43 tackles this season in 14 games.  With Byron Jones still out, Noah Igbinoghene is taking his spot.  He only has 10 tackles in 8 games.

Thomas Morstead is the punter and he ranks #21.  Jason Sanders has been a bit inconsistent and ranks 13th.  Punt Returns are handled by Tyreek Hill, a danger anytime he gets his hands on the ball.  He is ranked dead last but only has 2 returns for -4 yards.  Marcus Jones is the league leader and should have been voted to the Pro Bowl rather than Devin Duvernay who is ranked 16th.   Kick returns are the responsibility of Raheem Mostert.  He is ranked 19th.

Unfortunately, we are not going to get the benefit of cold weather.  The Dolphins don’t play well in the cold.  Temps are going to reach the 50s with a chance of rain.

Both teams need this game to continue in the playoff hunt.  I think it will come down to who is the healthiest.  I am concerned that we have too many injuries in the secondary.  Jalen Mills (Groin), Jack Jones (knee), Marcus Jones (concussion), and Jon Jones currently being on the injury list.  Jon Jones looks like he may be able to play.  That puts Myles Bryant as the slot corner and Shaun Wade as the only healthy backup.  The Patriots’ defense has to slow down the Dolphins’ offense.  I think they stop the run and force Teddy Bridgewater to be one-dimensional.   I think they play the soft zone again to take away the big play.  Keep everything in front of them and hope that pressure can get to Bridgewater and force some bad throws.

On Offense, the plays need to be mixed up, not the predictable run on 1st down run on 3rd down and pass on third and long.    Let Mac Jones complete some easy throws early to gain confidence.  Continue to throw the ball downfield.  The Offensive line needs to come up big.  The Dolphins like to blitz.  Get the plays in early and allow Jones time to make adjustments at the Line.  Vary the snap count and don’t wait till the last seconds on the play clock to snap the ball.

Special teams have to play better all around.  Missed extra points and FGs cannot happen.

I have the Patriots coming out ahead 24-20.  The defense has to keep Miami at 20 or fewer points for any chance to win his game.

The Patriots as a team must cut down on the pre-snap penalties and play smarter.  DO YOUR JOB, don’t try to do too much!  The Offensive line has 38 penalties, the most in the league.