3 weeks ago at 8:22 am ET
Follow @SteveB7SFG
Posted Under: Patriots Commentary 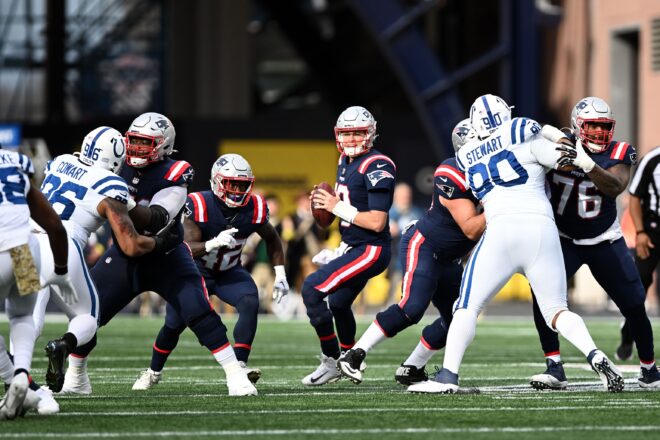 The Patriots and Jets resume their rivalry with a big game on Sunday. The two teams met just two games (and three weeks) ago, so the tape for both teams will still be fresh. And both teams are coming off their respective bye weeks, so they’ve had plenty of time to prepare.

With the 7-3, first-place Dolphins on a bye week and the Bills’ game against Cleveland moving to Detroit due to a large snowstorm, it is a big week for the AFC East standings. Although it is only the beginning of the second half of the season, all four AFC East teams have winning records, and if the season ended today (I generally hate this term, but use it myself), all four teams would be in the playoffs for the first time since 1998.

This year, the league’s parity has shown itself; after losing to the Patriots, the Jets dominated the Bills defensively in a huge win. I spoke to old friend Antwan Staley earlier this week on a podcast. He’s a beat writer for the Jets for the NY Daily News. He said the Jets could either be in first place this Sunday with a win or last place with a loss. That shows just how tight the division is, at least for now.

This week’s game will be broadcast by CBS. Kevin Harlan will be making the play-by-play calls with Trent Green as the color analyst. Melanie Collins will work from the sidelines. The game will also be aired on the Patriots’ flagship radio station, 98.5 The Sports Hub, with Bob Socci and Scott Zolak on the call, produced by Marc Capello.

We here at PatsFans.com are continuing our “Razor’s Edge” column in 2022 to analyze some of the game’s key matchups and what you can look for in how the game plays out.

With the two teams playing again, so close together since the last time, we’re going to forego the usual matchups with the running and passing games against each other since they remain pretty much the same as three weeks ago. However, there are some changes in each team’s outlook.

The Patriots should get back center David Andrews and DeVante Parker this week. Andrews missed the first game with a concussion, and his return should help solidify a leaky offensive line and help rookie LG Cole Strange. Parker was hurt on the first offensive snap. His return will give Mac Jones the big, physical target who can win those 50/50 balls on the outside and in the red zone.

The Jets will be without Sheldon Rankins this week. He played 49 snaps in Week 8, but while his loss is significant, the Jets are very deep along their DL. Something else to monitor will be in the slot. Disgruntled WR Elijah Moore is expected to get the start in the slot, and get his production going.

If you’d like to take a look at those, they can be found here:

The Patriots are looking to get two games over .500 and get some momentum going for the stretch run in the second half of the season. Under Bill Belichick, the Patriots are 15-7 after a bye week but have lost after the bye the past two years, including the loss in Indy last year that snapped the team’s seven-game winning streak.

Three Keys to the game from a Patriots perspective:

Stretch the Field…Horizontally — The Patriots really need to get the passing game going, and that means not only Jakobi Meyers but some of the other players as well. And a big part of that is with better play design. Put Mac Jones under center, use play action, and get the flow going one way and throwing across the grain to the other. That puts some of the speedier, more athletic guys like Tyquan Thornton and Kendrick Bourne with the ball in their hands in space.

Of course, it goes without saying that the pass protection has to be much better than it has been, especially against the Jets a few weeks ago.

Force the Game Into Zach Wilson’s Hands…Again — Yes, Wilson threw for 355 yards in the first meeting and had several big, chunk plays. But the Patriots also hounded him virtually all game long and forced him into making several mistakes, including three interceptions.

It will be interesting to see if the Jets decide to use Wilson’s legs more in this game to alleviate the pass rush, but Matthew Judon, Deatrich Wise, and Josh Uche should factor big in the Patriots’ game plan.

Win The Red Zone — The Patriots’ red zone issues have been a big problem all season, and in the first game in the Meadowlands, Nick Folk kicked five field goals. The team can’t have this many threes, instead of sixes going down the stretch.

Matt Patricia has to get the play design and calls straightened out to get the tight ends (Parker, too) involved more in the red zone.

I said a while back that I thought the Patriots and Jets would split the season series this year, with each team holding serve on their home turf. The Patriots threw that prediction off with a tough, hard-fought win on the road. The Jets are undefeated on the road this season (defense travels).

The last time, the Patriots stopped the running game, holding the Jets to just 51 yards on the ground, making them one-dimensional. Ultimately, this game will be decided by which team gets a better game out of its offensive line. But home field advantage does help here. I expect Gillette Stadium to be loud on Sunday.

By: Ian Logue
Some quick New England Patriots news and notes on this Wednesday.
2 hours ago