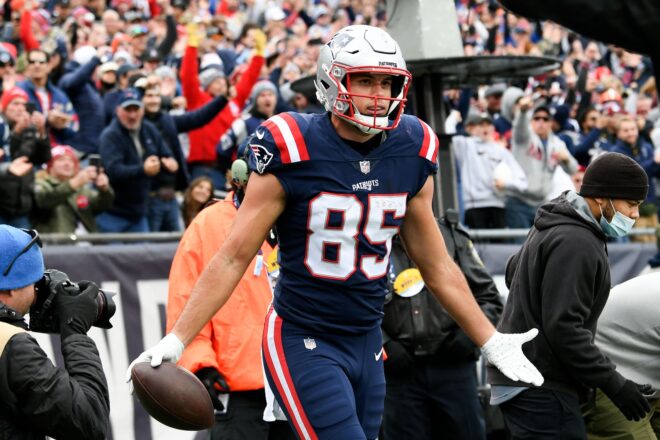 Good morning, and Game Day. The Patriots and Colts revive a rivalry that was one of the best in the league during the Brady-Manning era. Here are your Patriots news and AFC East notes for this week.

Did You Know? The first regular-season meeting between the Colts and Patriots took place on October 4, 1970, at Harvard Stadium. In a close 7-6 game in the fourth quarter, QB Johnny Unitas threw a 55-yard TD to seal a 14-6 win.

Did You Know? Pt 2: The Colts and Patriots met at the RCA Dome in Indianapolis on November 4, 2007, with both teams 7-0 entering the game. That was the latest that two undefeated teams met in NFL history. The Patriots won a close one with Tom Brady hitting Wes Welker and Kevin Faulk for touchdowns erasing a 10-point deficit in the Patriots’ 24-20 win.

Did You Know? Pt 3: Bill Belichick’s first job in the NFL was in 1975 with the then-Baltimore Colts as an assistant on head coach Ted Marchibroda’s staff. Twenty-one years later, in 1996, Belichick, who was the head coach of the Cleveland Browns, was fired when the team moved to Baltimore.  And the first head coach hired by the now-Baltimore Ravens was Ted Marchibroda.

Patriots Players to Watch Against The Colts:

The Patriots and Colts are both on the outside looking in for a possible playoff berth thus far this season, and both need the game to stay in the hunt.  The Patriots look to get over .500 for the first time this year, while the 3-4-1 Colts could still push for the division in the AFC South.

So, here are our Patriots players to watch today at Gillette Stadium today.

Hunter Henry — The Patriots signed the big tight end in 2021, who became a favorite red zone target for Mac Jones down the stretch last season. Much was expected from the pair this year, but it hasn’t worked out. Whether it is the new offense, play calling, etc., Henry had 6 catches for 77 yards with two TDs against the Colts last year.

Rhamondre Stevenson — The rising star of the Patriots backfield is becoming a true three-down back for the offense. The Colts will be tough to run against with a big talented DL, but we know he can make yards after contact. But where Stevenson could factor big for the Patriots is in the passing game. He’s been consistently getting more productive in this regard, and this week, we’ll look to see if this continues.

Jabrill Peppers — The Patriots signed the physical, versatile safety this offseason, and he’s becoming more and more of a go-to guy as the third safety in the mix.  Filling in for Kyle Dugger who is injured, Peppers has been excellent, not just as a member of the defense but as a STs contributor. He may see some action as a dime linebacker trying to take away the Colts ability to run the ball and still cover.

Matthew Judon — The Patriots’ best pass rusher will be asked to once again set the edge in the running game and disrupt Sam Ehlinger in the passing game. The QB is making just his second start and the Patriots will want to pressure him into making mistakes, hopefully leading to some turnovers, something that has plagued the Colts’ offense this year. And Judon is the perfect player to generate that pressure.

James Ferentz — With David Andrews still in concussion protocol, Ferentz will get another start at center. Last week didn’t go well against Quinnen Williams. It doesn’t get any easier this week as he’ll face DeForrest Buckner. Overall, the offensive line will have to step up their game this week. But it starts with Ferentz.

Chris Long: The former Patriot, who was part of the Super Bowl-winning team that defeated Atlanta, cleared the air about the Patriots being a “no-fun” team. That nonsensical notion was uttered by Long’s teammate in Philly the year after New England won the Super Bowl.

Lane was suddenly an expert on what transpires inside New England’s locker room despite never playing for the Patriots. After saying that the players had no fun, Lane went on to state that ‘“The Patriot Way’ is a fear-based organization” and the players “act like f***ing robots.” Many believed at the time that it was Long who put those thoughts into Lane’s head.

Long said to NBC Sports Boston, “Lane opened his mouth.”… Lane got walked into that and it just stuck. And of course, everybody was like, ‘Oh, Lane is best buddies with Chris. Chris is the one who said it.’ That always bothered the hell out of me, because all I’ve ever said is positives about New England and my teammates there.

“We did have fun. I put on a Jules (Edelman) mask. We were drunk as hell at the parade. We would enjoy the plane rides. Bill would let us sit in first class, which was awesome. Other coaches never did that and always complained about that.

“We had a tight-knit group. It was awesome man, the locker room was great. So I hated being misrepresented by association with that thing, because I did have fun up there.”

Long had great things to say about Bill Belichick as well. “Learning football from Bill Belichick was such a blessing,” Long said (despite the fact that many believe another myth that ‘no one comes to NE because of BB’). “And he was so cool about the way it ended, too. Not that he cared that I was leaving, but he didn’t hold a grudge or nothing like that. We still text from time to time.”

Bill Belichick: The Patriots coach always delights in making life a little difficult for the media members, and earlier last week, he was asked about the Patriots “almost making a trade at the deadline.” To set the stage for this, Mike Florio said that the Patriots were in on Chase Claypool until the end.

Belichick wasn’t having any of that (as usual) and tried to shut that talk up as quickly as possible. “Yeah, we’re done,” (with trade talk) Belichick said. “The trade deadline is over, so we’re moving on to the Colts.”

When pressed on the subject, Belichick responded with, “Nothing happened, so we’re moving on,” Belichick said. “I don’t even know what close means. What does that mean?”

But Florio may have influenced the media but first stating that New England was in negotiations until the end for Claypool. But after Belichick’s press conference, he said that “it wouldn’t be a surprise to learn that the Patriots made a run at getting him.”

“Patriots 4th & 2 Podcast: If you haven’t checked out our PatsFans.com podcast, “Patriots 4th & 2”, in a bit, please check it out. Russ, Derek, and I looked at the victory over the Jets and how they match up against the Colts.

The slate of games for Week 9 and my predictions are straight up for this week.
Cleveland, Dallas, Denver, New York Giants, Pittsburgh, and San Francisco are on a bye week this weekend.

Buffalo Trades For Indy RB Nyheim Hines:
The Buffalo Bills made a trade with the Indianapolis Colts at the trade deadline, with the Bills shipping RB Zach Moss to Indy for versatile RB Hyheim Hines. Hines is a very good receiver out of the backfield, something that Buffalo has been searching for.

The interesting thing is that Buffalo just drafted James Cook this spring to be the change of pace runner and the third down back. That would ease the burden on Josh Allen to run as much on third down. Most backs with that kind of skill set normally start slowly. Cook was no exception, but last week, he had a combined 70 yards against a good Packers defense.

This trade will probably set his development back, although Bills GM Brandon Beane denied that it would.

The Dolphins promptly gave Chubb a five-year, $110 million contract extension, with $63,200,000 guaranteed. His salary will pay an average salary of $22 million. He brings an excellent ability to rush the passer, but although he’s improved his run defense, he is not considered a good run defender.

“The Dolphins rely on blitzes to get sacks, with nine of the team’s 15 sacks have come on snaps where they’ve rushed five or more. That puts a burden on the secondary if the pass rush doesn’t get home. Chubb should undoubtedly help in that regard.

“So, there is a dual element to the RPOs and sometimes there’s really a three-way decision. Teams are doing the inside, outside, where they’re doing the sweep to one side and RPO, or keep, or whatever counter-play back to the other side. And then, teams like Baltimore. We did it with Cam [Newton] too, where you have the outside play, and the quarterback keeps it inside. As an outside to inside, instead of inside to outside, just reverse that. Who are you RPOing? Are you RPOing the end, or are you RPOing a three-technique?

“So, there are multiple versions of that. Another element of that in the RPO is the hiding behind the coverage, right? So, you can RPO it inside to outside with a blocker or you can run a play and then have somebody come in behind them. So, if the linebacker comes up, you throw it to the guy behind them, if the linebacker drops off, you hand it off, that kind of thing. So, there’s multiple varieties of that.

“The Colts have really shown all of it. It was only one week, but they did it all against Washington. They had the three-option plays and they had multiple two-option plays. The play they scored on was the sweep, right? But then they also had the shuffle pass. So had the defense widened, then they would’ve shuffled it inside to the tight end. Which we saw that from Pittsburgh. They did a similar thing, multiple times. It doesn’t really involve the quarterback running, right? So, he either gives it to the sweep or he pitches it into the shuffle guy. So, two and three options.”

Patriots head coach Bill Belichick was asked about RPOs and if there were elements of the Wishbone offense in there.