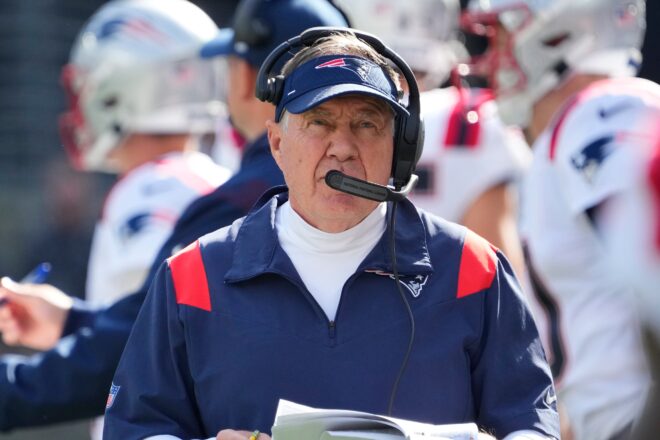 When asked about his career milestone, Belichick diverted attention away from himself, electing to credit his players.

“I’ll be able to talk about that when it’s over. We’ll add them up at the end,” Belichick said postgame. “I’m just happy for our team and appreciate all the great players we’ve had who’ve won those games. We had a couple of them in the locker room besides our players. Guys like (Devin) McCourty and (Matthew) Slater, (Jerrod) Mayo, Troy Brown. Those guys won a lot of games for us, for me, so those are team wins.”

However, his quarterback Mac Jones and linebackers Matthew Judon and Josh Uche praised the future Hall of Famer.

“Just wanted to give a huge congratulations to Coach Belichick,” said Jones. “What an accomplishment, obviously he’s done a great job here, and it’s just a blessing to be able to play for him.”

Uche shared a similar message about his coach, joking “Y’all don’t know the real Bill…A great guy, a great leader, and got some of the best jokes I’ve heard in a while. So, it’s fun to come into meetings. You never ever know what to expect and the greatest coach of all time.”

Lastly, Judon expressed his pride in playing for Belichick.

“We’re very proud of our coach…He tells us players are winning games, but he won all of those games. He game-planned, he did the film, he did the preparation, he did the study and he put his players in a position to make plays. Him being second all-time that’s just a compliment to him as a coach, the longevity that he’s had, and just the success that he’s had.”

In the locker room after the game, Patriots owner Robert Kraft gave a speech to the team and presented Belichick with a game ball.

Devin McCourty followed the speech with a celebratory water bottle shower on his longtime coach.

You can see the celebration for yourself from the Patriots inside the locker room footage below.

By: Russ Goldman
In this episode, we look back at the Patriots loss to the Bills, Later on, we preview the upcoming game against the Cardinals.
12 hours ago