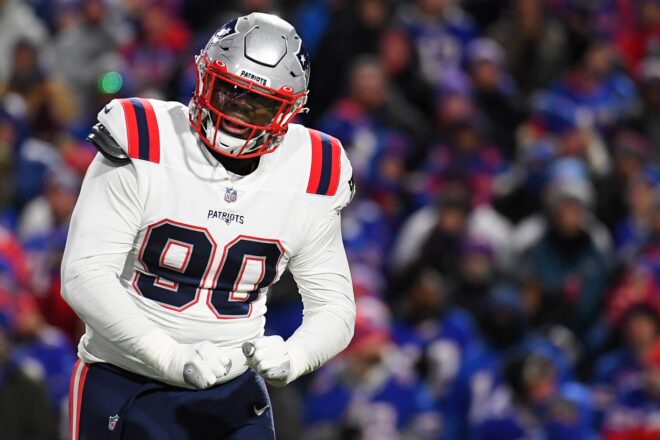 After seeing Christian Barmore leave Sunday’s game in Cleveland with a right knee injury, the news appears to potentially be positive for the defensive tackle.

According to ESPN’s Mike Reiss, Barmore was spotted by reporters who were in the locker room on Wednesday, with the second-year player out of Alabama making what Reiss jokingly called a “sudden change of direction,” noting that Barmore’s evasive action was hopefully a sign that he avoided a serious injury.

Barmore has played well this season, providing a solid presence up front, and has been instrumental in both the run game, as well as helping New England bring pressure up the middle.  He currently has 15 tackles including one sack and 3 QB hits so far through six games.

Barmore went down early in the second quarter on a 3rd-and-7 pass play by Jacoby Brissett and was initially listed as questionable but didn’t return.  His health will definitely be something to keep an eye on as the Bears come into Gillette Stadium ranked second in the league in rushing yards while averaging 170.8 yards per game, as well as 4.9 yards per play.

They’re coming off of a massive performance last Thursday night against Washington after Chicago put up 238-yards on the ground, with quarterback Justin Fields leading that group with 88 of his own on the ground.

Belichick said on Wednesday that Fields is definitely someone they’ll have to be wary of, and he feels the Bears will be yet another tough test for his football team.

“I think he’s a very talented player that’s getting better all the time,” said Belichick of Fields. “Honestly like a lot of players on that team are. They’re a team that each time you watch them play, you kind of see some of their younger players get a little bit better. They have a lot of them in there.”

“This is a team that’s shown a lot of growth in six weeks. I’m sure with the good coaching they’re getting and the good fundamentals that they have established that that’s the way they’re going to trend.”